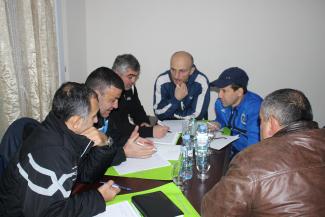 CORSIER-SUR-VEVEY (December 24) -- Development officers from Europe, Asia and Africa converged in Europe last week to deliver a pair of coaching courses with the objective of growing the educational platform for active wrestling coaches in the region.

Level One Coaching Course in Ukraine

United World Wrestling education and regional development officers Vincent AKA (RDO Africa) and Andrey VORONTSOV (RDO Asia) delivered a level one course for coaches last week in Kiev. The technical course for coaches was sponsored by the International Olympic Committee's Olympic Solidarity program, which aims to help develop sport around the world.

The course, which was held at the National Olympic Training Center in Kiev (Koncha Zaspa), included 32 coaches including Ekaterina BURMISTROVA, a two-time European champion and 2002 world champion at 67kg, was one of two women in attendance. The training included on-the-mat training as well as classroom work and interactive discussions about technical aspects of the sport, as well as how to create more offensive action in the sport.

Ukrainian president of National Olympic Committee Sergey Bubka also took a moment during the Ukrainian year-end Olympic awards ceremony to express his gratitude and support for the United World Wrestling initiatives and involvement in Ukraine.

More than 20 coaches from the three countries attended the weeklong course, with coaches from each country present in all working groups. The focus of the course was to create better communication among the South Caucus nations and work to find improved training techniques and coaching solutions. By the end of the course coaches from Armenia, Azerbaijan and Georgia had grasped the importance of the principles of security, hygiene, positive feedback, game-based training sessions, relationships with young wrestlers, their parents and other agents (e.g. referees).