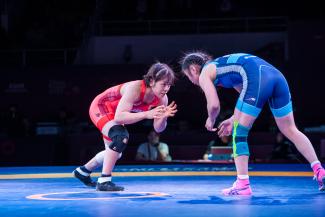 ULAANBAATAR, Mongolia (April 21) -- World champion Remina YOSHIMOTO (JPN) had one small stumble early in the final, but it was smooth sailing the rest of the way as she cruised to her first senior Asian title.

Yoshimoto scored a late fall over home favorite Namuuntsetseg TSOGTOCHIR (MGL) in the 50kg final, and powerhouse Japan took three of the five titles at stake as the women's competition started Thursday at the Asian Championships.

"I wasn't concerned about giving up points, but to achieve my ultimate goal, I have to raise my attacking ability so I don't give up points," the 21-year-old Yoshimoto said.

With China missing from the tournament due to travel issues as well as the DPR Korea, the women's fields had limited entries and all five weight classes competed in a group stage. 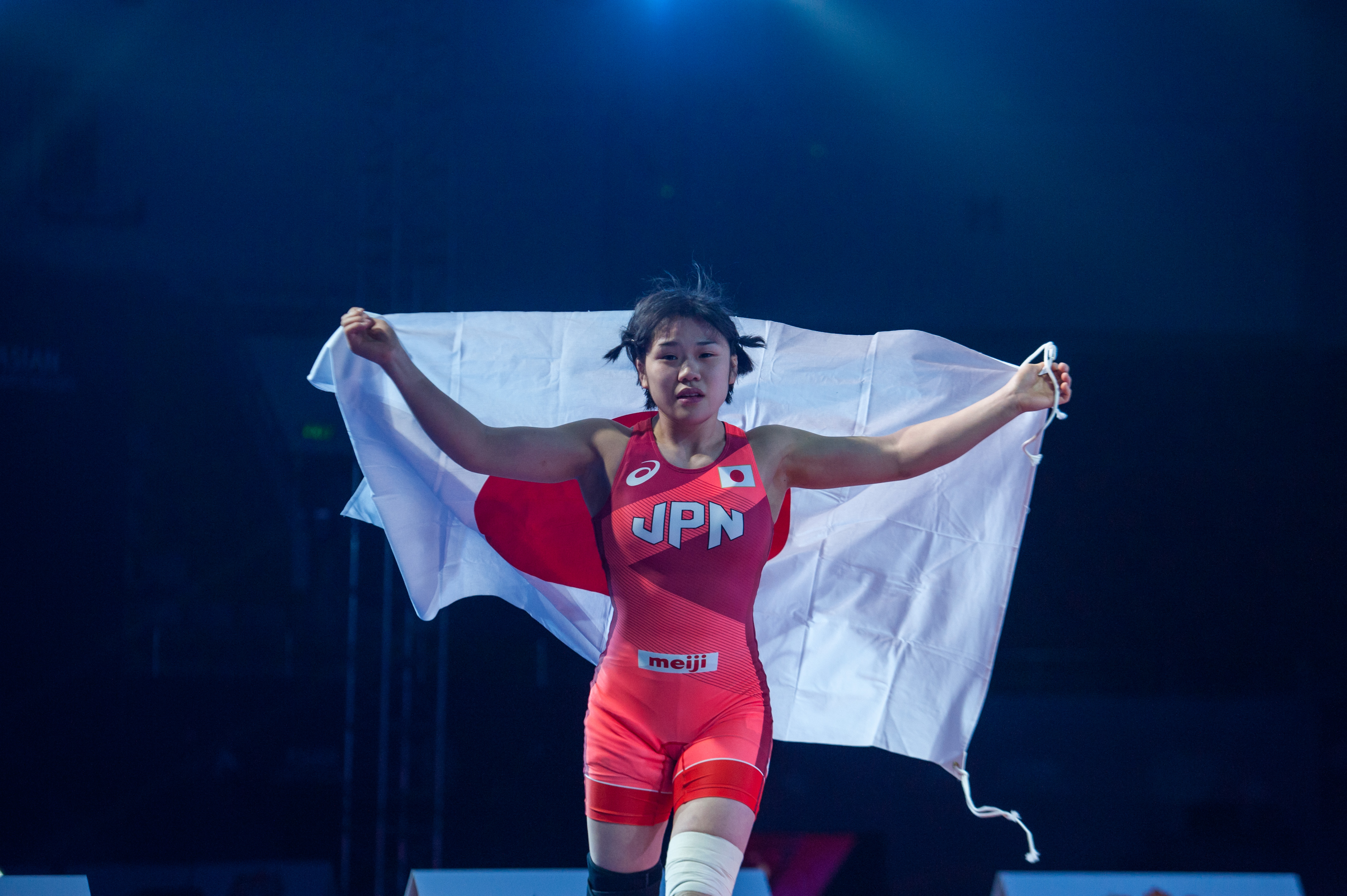 Yoshimoto showed the domination that propelled her to the world title last year in Oslo when she needed just 2:13 to win her two group matches with a technical fall and fall, then made the final with a 10-0 technical fall in 1:07.

In the gold-medal bout, Yoshimoto lost her balance when Tsogtochir slipped away from a tackle attempt, allowing the Mongolian to rush her and gain a takedown. That got the partisan crowd at the Buyant Ukhaa Sports Palace vocally involved.

"The crowd was really something, but this [my opponent's] country, so there's nothing I can do about it, it's only natural," Yoshimoto said. "I tried not to pay attention to during the match."

There would be no more slipups, as Yoshimoto built up a 6-2 lead in the first period, and added six more points before ending the match by fall at 5:04.

"I allowed her to get points, which made the match more touch-and-go," Yoshimoto said. "I need to reflect on [that mistake]."

The match gives Yoshimoto, a student at powerhouse Shigakkan University, something to work on.

"I have to address the issue of having my attack lead to points," Yoshimoto said. "There were times when I wasn't able to turn an attack into points or let my opponent get away, or had points scored on me. I came to realize this, and I'll work on it to achieve my next goal."

That next goal is crystal clear -- to get to the 2024 Paris Olympics. But to do that, it means a clash with the reigning Olympic champion Yui SUSAKI (JPN), who has not competed since her triumph at the Tokyo Games last summer.

The two could meet in June at the All-Japan Invitational Championships, where Susaki will make her return to action. The tournament will serve as a qualifier for this year's World Championships, although Yoshimoto will definitely not be defending her title, as she has already committed to the Asian Games.

So there won't be anything but a psychological edge at stake if the two clash in June, as the qualifying process for Paris starts at the All-Japan Championships in December. Susaki has already beaten Yoshimoto twice, most recently in a close 2-1 decision in 2019.

"The 'real' competition is the [first] Paris qualifier which will be in December, that and the next in June, so I have to get a win there," Yoshimoto said.

"The [upcoming tournament] is before that, so it's like I just want to see how it goes. But in reality, I have to win. It's really been awhile, so I have to go all out, as I will be the challenger." 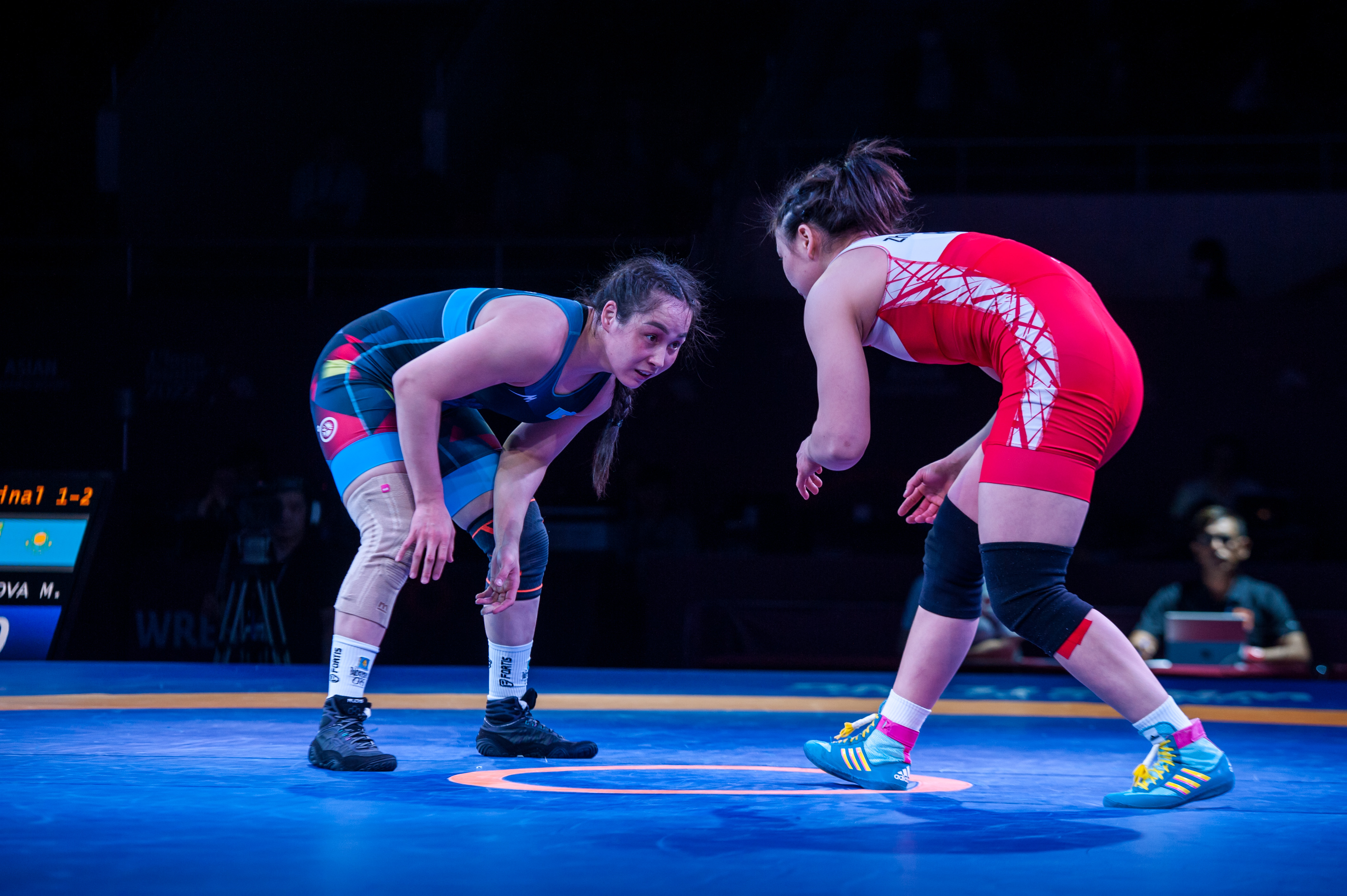 At 68kg, Bakbergenova scored three points in the final 25 seconds of the summit clash to stun Olympic bronze medalist Zhumanazarova 4-2 and pick up her first Asian gold after two previous bronzes.

In a staid match, Zhumanazarova had gone ahead 2-0 after receiving her second activity point, before the gap was cut to one when Bakbergenova gained an activity point. With the clock ticking down, the Kazakh came to life, spinning behind on a takedown attempt to force a stepout.

An additional point was tacked on for fleeing, and another when the Kyrgyz side unsuccessfully challenged the call. The match ended with Zhumanazarova desperately clutching an ankle but Bakbergenova fending off the tackle attempt.

"With the help of God I’ve won the Asian Championships," said Bakbergenova, who had lost 5-0 to Zhumanazarova in the group stage. "We’ve been preparing for a very long time here in Ulaanbaatar. We had a two-week training camp here. Thanks a lot to the Mongolian girls, it was a good camp with nice training."

Bakbergenova also had a close call to get into the final. Facing former world junior champion Naruha MATSUYUKI (JPN) in the semifinals, Bakbergenova scored a takedown with 30 seconds left to win 3-3 on criteria.

"I wrestled against the Japanese wrestler in the semifinal, before that I knew I was gonna wrestle her, and I did my best to win the match," Bakbergenova said. 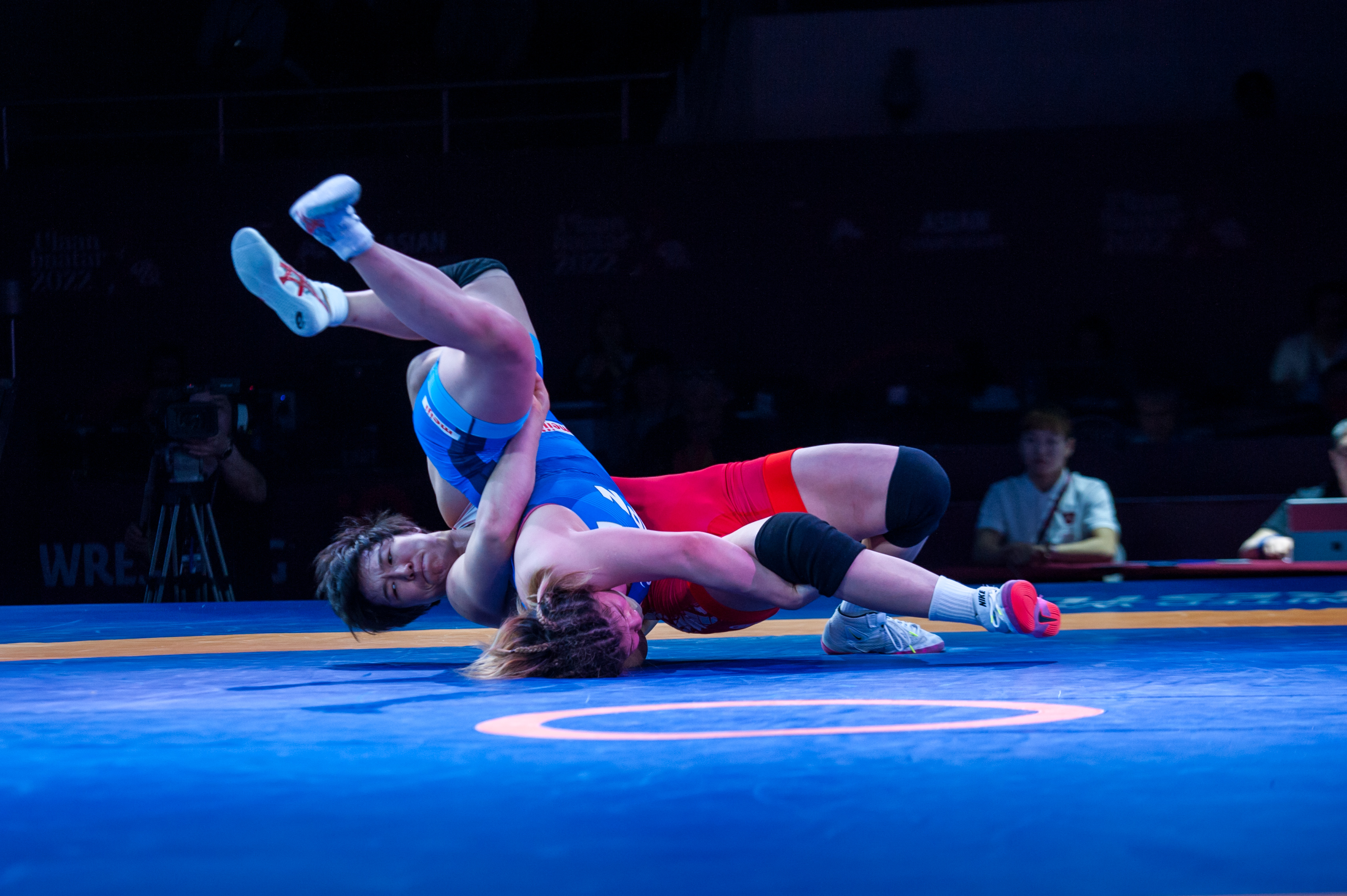 Medet Kyzy, a two-time Asian silver medalist, finally moved to the top of the podium with a 5-3 victory in the 76kg final over former world junior champion Yuka KAGAMI (JPN).

Medet Kyzy scored 4 points with a twisting counter lift from the standing position that Kagami reversed to the back, putting the Kyrgyz ahead 5-2. Kagami, the 2019 Asian champion at 72kg, scored a late stepout, but it was too little, too late. 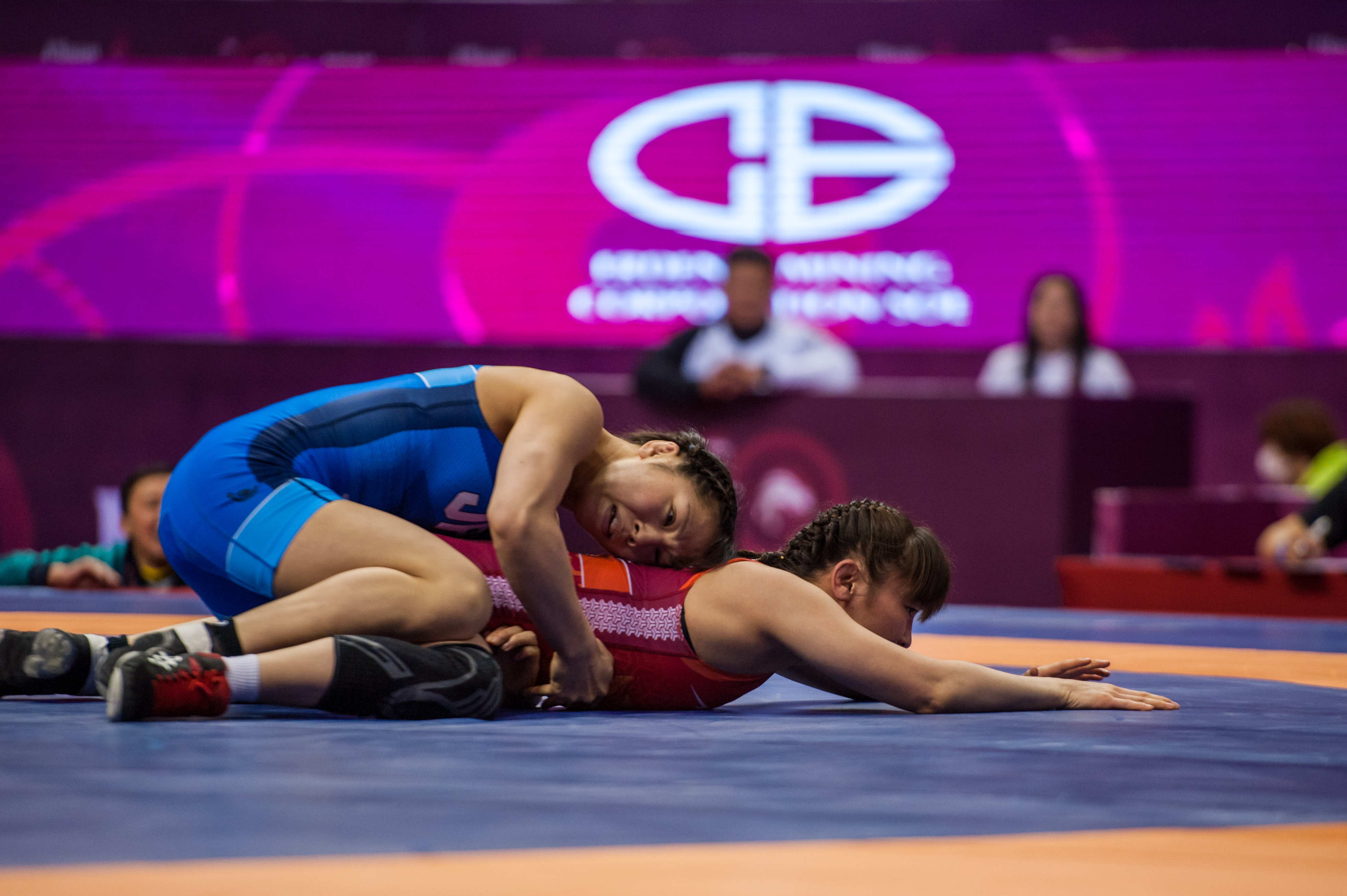 Umi IMAI (JPN) defeated Otgonjargal GANBAATAR (MGL) in Round 2 to all but confirm the gold. (Photo: UWW / Bayrem Ben Mrad)

Japan's two other gold came from Umi IMAI (JPN) at 55kg and Sara NATAMI (JPN) at 59kg, who both became first-time senior Asian champions. Both weight classes had just five entries and were run in a round-robin format.

Imai, the 2018 world junior champion at 53kg, had her 'gold medal' match in the second round of the round-robin when she defeated Otgonjargal GANBAATAR (MGL), 12-3. She clinched the title in her final match in the night session with victory by fall over winless Sarbinaz JIENBAEVA (UZB).

"It was my intention to definitely bring the title home, so it's a bit of a relief," Imai said. "I'm glad I can take a medal home.

"I gave it my all and did my style of wrestling. In my first match, my legs weren't moving well and other things, but instead of becoming timid, I stuck with my wrestling and stayed on the attack, so it was good."

Imai said she overcame jitters that were from more than appearing in her first Asian Championships.

"It's my first international tournament in a while," Imai said. "So there was an aspect of being nervous. But if I think too much, I tighten up. I thought to just go like I always do. I just focused on practicing as usual."

Imai took a practical approach to a question about the missing Chinese and DPR Koreans.

"Those two countries are on the top level in Asia. My feeling was that I wanted to face them and test myself. But it is what it is, and it was good that I fought in my own style."

In a final round-robin match that ended up deciding the silver medal, Ganbaatar defeated Sushma SHOKEEN (IND) 15-5, overcoming a 5-4 deficit with a reversal and five straight lace locks. Shokeen took the bronze. 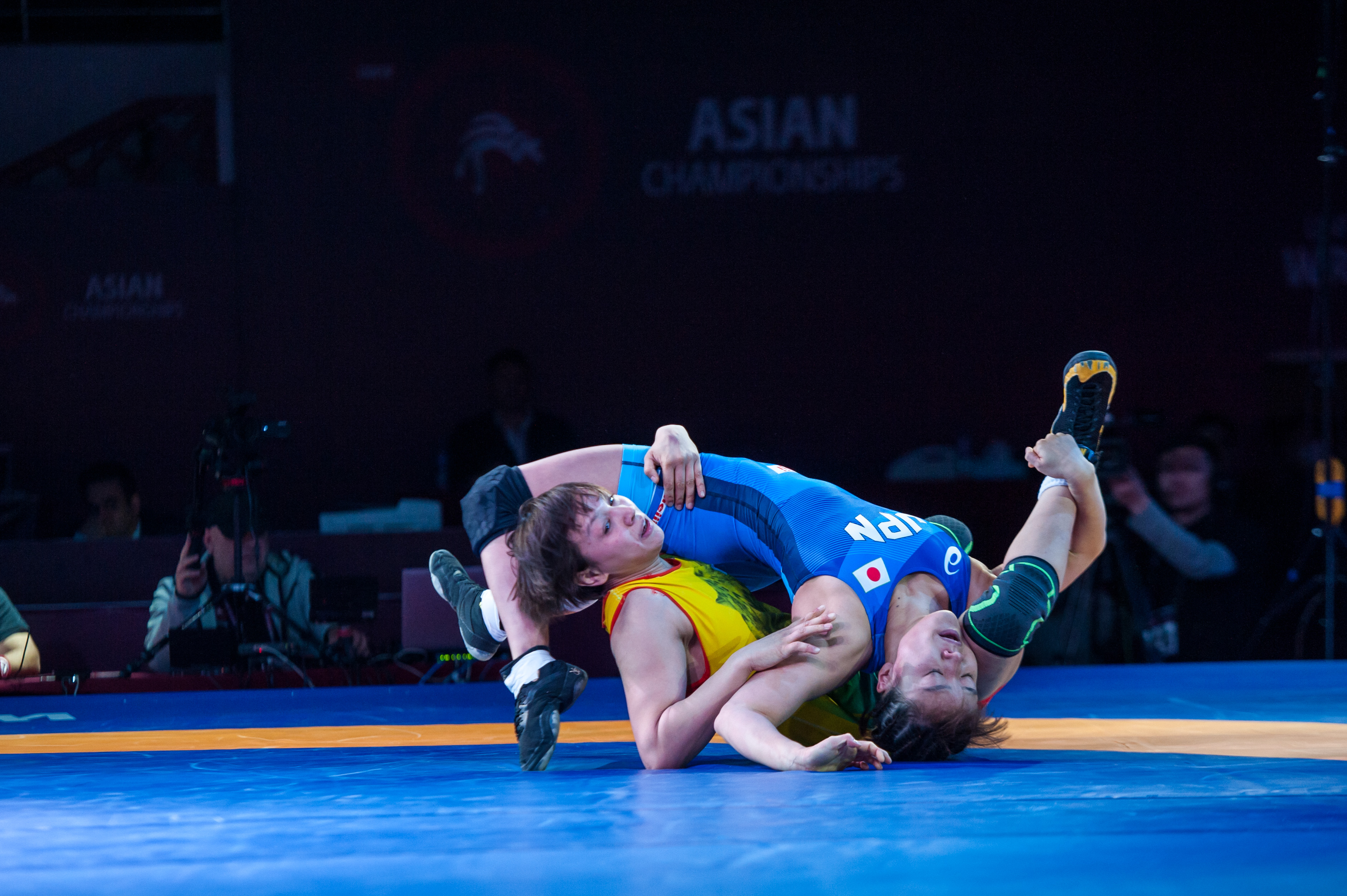 Natami, a Shigakkan teammate of Yoshimoto's, had previously appeared at the Asian Championships as a high schooler in 2018 in Bishkek, where she finished second to Chinese opponent Xingru PEI (CHN). She wishes she had a chance for a rematch.

"The Chinese athletes are strong," Natami said. "I work to win each and every match. I want to [face] the Chinese again."

Natami defeated eventual silver medalist Shoovdor BAATARJAV (MGL) 4-2 in the third round of the morning session. In her final match, she got caught three times in a counter lift by Diana KAYUMOVA (KAZ) and trailed 6-4, but scored six points in the second period for a 10-6 win.

"My attack was good, but the finishing up was poor," Natami said. "When I get back to Japan, I will closely address this problem."

Earlier in the day, Baatarjav edged defending champion and world bronze medalist Sarita MOR (IND), 2-1, and the Indian eventually had to settle for the bronze medal.

Because of the limited fields, there was only one bronze medalist in each weight class. At 50kg, 2021 silver medalist Jasmina IMMAEVA (UZB) scored a fall over MANISHA (IND); Delgermaa ENKHSAIKHAN (MGL) sent Matsuyuki home empty-handed after a 4-0 win at 68kg; and Gulmaral YERKEBAYEVA (KAZ) took the 76kg bronze by beating Ariunjargal GANBAT (MGL), 7-4.