Yazdani, in league of his own, wins gold in Almaty 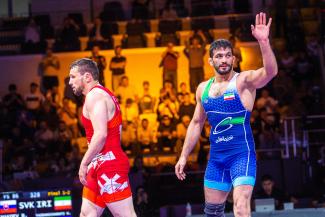 ALMATY, Kazakhstan (June 5) -- There had already been a few high-profile finals before Hassan YAZDANI (IRI) stepped on the mat. Tulga TUMUR-OCHIR (MGL) had won his first-ever Ranking Series gold, U23 world champion Ernazar AKMATALIEV (KGZ) had been involved in a 16-point final which he won by fall inside the first period, European champion Tajmuraz SALKAZANOV (SVK) won at 74kg with ease.

But when Yazdani's name was called for the 86kg final, you knew who is the biggest star of the sport. By the time he scored his first takedown against Boris MAKOEV (SVK) in the final, fans had queued up to take a picture with him. The audience had moved towards the athlete's exit to shake his hand. Nothing mattered more than catching a glimpse of Yazdani. A few managed to do it, and some left disappointed.

The world champion was returning to the mat since winning the gold in Oslo seven months back. He had captivated the world by beating David TAYLOR (USA) for the first time in four attempts, a win that relieved some of Yazdani's pain of losing the Tokyo Olympics final to Taylor in the dying moments.

Sunday's final did not have the same stakes on the line. Yazdani was wrestling for a Ranking Series gold against the opponent from the '17 World final which he won. He did not have millions of eyes on him watching and hoping to win against an opponent he has never.

The 27-year-old still put on a show. Like when Makoev got a full shot on a single leg and Yazdani defended it with a stepback and lifted Makoev for exposure for two points. Or when he used his strength to score a double-leg takedown.

"It's been about eight months since I had not taken part in competitions," Yazdani said. "I decided to wrestle at this competition to re-evaluate my weaknesses and keep my body and mind on edge so that I can be fully prepared for the international competitions ahead."

Winning the final 11-0 was just a testimony of how is still in top form and nothing mattered more to any. The fans will forget the comeback from Amir ZARE (IRI) to win the 125kg or how dominant Kamran GHASEMPOUR (IRI) was to win the 92kg. All that matters is a Yazdani win.

He first made it past Fatih ERDIN (TUR) 11-0 in the quarterfinals and was then tested by Asian champion Azamat DAULETBEKOV (KAZ) in the semifinals. The Kazakhstan wrestler was the only one who could wrestle Yazdani for more than four minutes but he ultimately lost 12-1.

The final against Makoev only lasted 4:33 but Yazdani put it on record that he is ready for another season and defend his world title in Belgrade, Serbia. 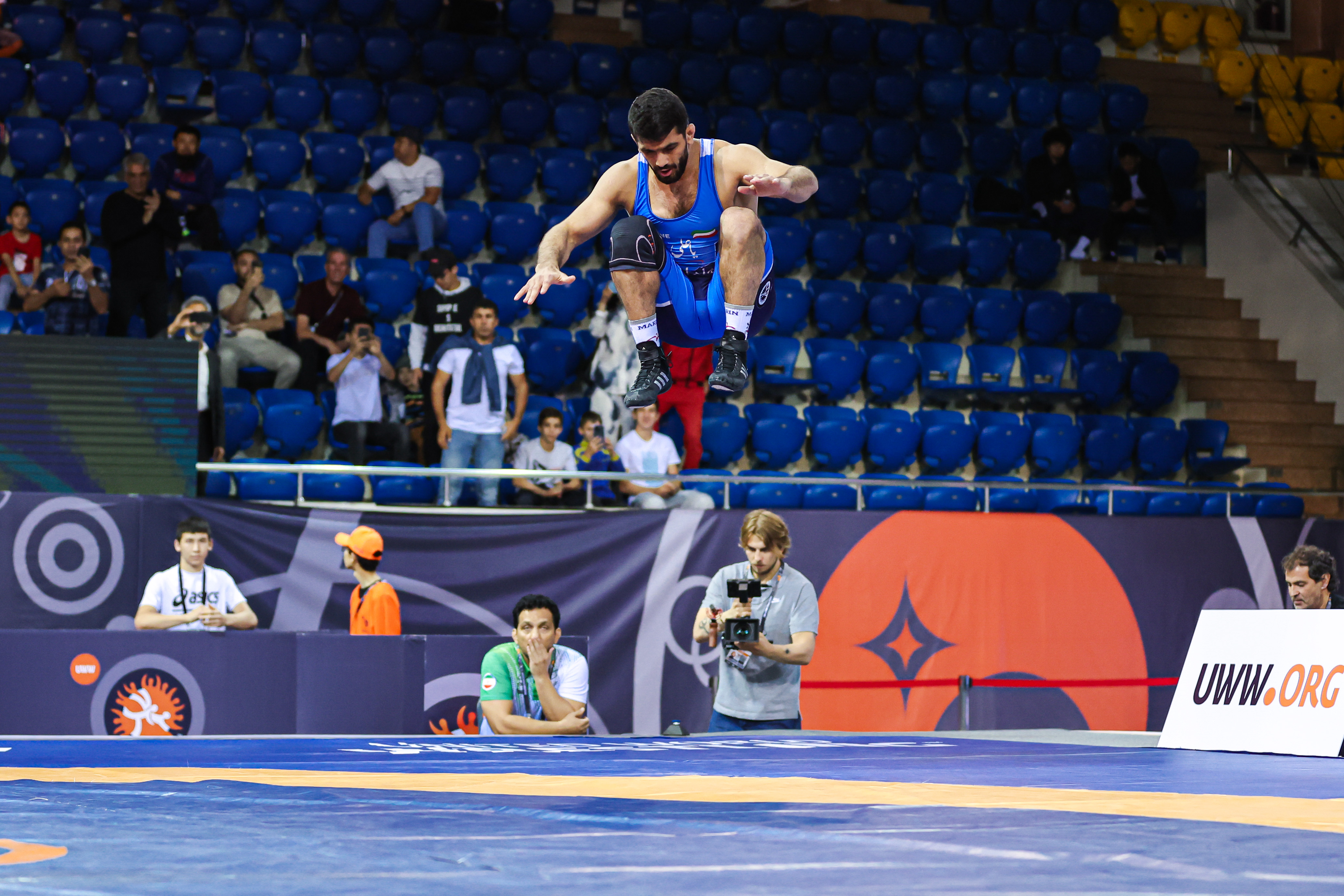 "The level of this competition was good," he said. "There some major Asian and a European wrestlers present who were quite good. My main purpose here was to be on the mat and be able to keep my body prepared and these matches helped me with that purpose quite well."

In little more than three months' time, Yazdani will be in Belgrade, Serbia defending his world title at 86kg. While he did not reveal his future competitions, Yazdani did not rule out being part of a couple before Belgrade.

"If my coach sees fit yes, I would like to compete," he said. "However, after so many months of being away from the mat officially, I got the results I was hoping for and now at this point, I will be willing to do so as long as the coach sees competing in a match fitting." 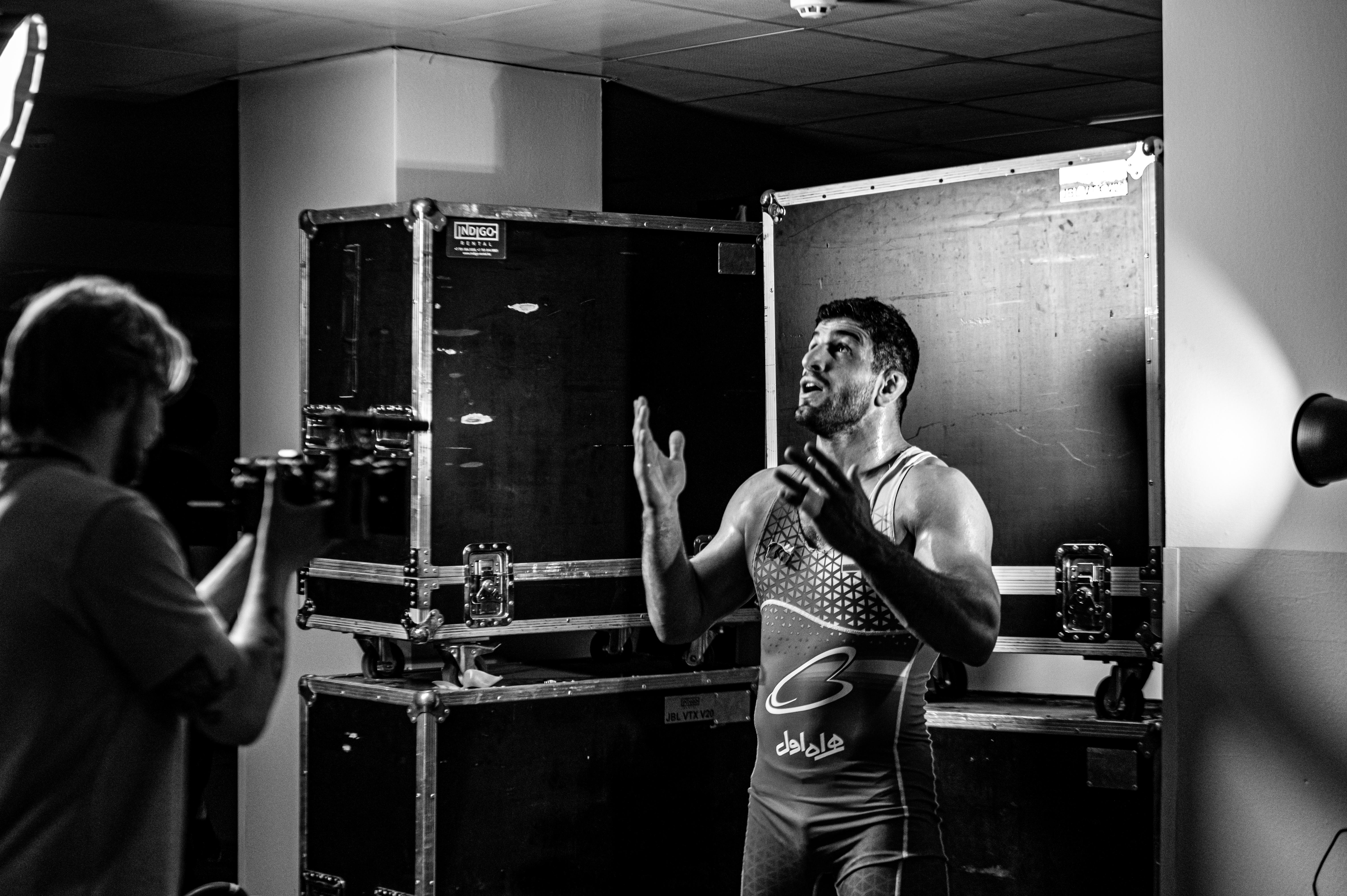 In a similarly dominant fashion, Ghasempour claimed the 92kg gold beating three Kazakhstan wrestlers en route. In his four bouts, the Iran wrestler scored 38 points while not giving up a single one.

Ghasempour had scored a career-defining world title win in Oslo and since then his following has sky-rocketed. In a short time, he has established himself as the top wrestler at 92kg with wins over J'den COX (USA) and Magomedov KURBANOV (RWF).

In Almaty, he started strong with a 10-0 win over Viky CHAHAR (IND) followed by Islyambek ILYASSOV (KAZ) in Round 2 with a fall after scoring 10-0. In the semifinal, he wrestled Abdimanap BAIGENZHEYEV (KAZ) and moved into the finals with an 11-0.

Adilet DAVLUMBAYEV (KAZ) had entered the final from the other side and he tried stopping Ghasempour from winning the gold but the Iranian wrestler was on a different level.

He quickly led 4-0 with two takedowns and Davlumbayev was already struggling to keep up. It quickly became 9-0 when Ghasempour scored another takedown and rolled the Kazakhstan wrestler for exposure. The corner challenged the two-point call but lost it.

Davlumbayev managed to delay the loss to the second period but Ghasempour was happy to play it easy and finally won the gold with 2:07 remaining. 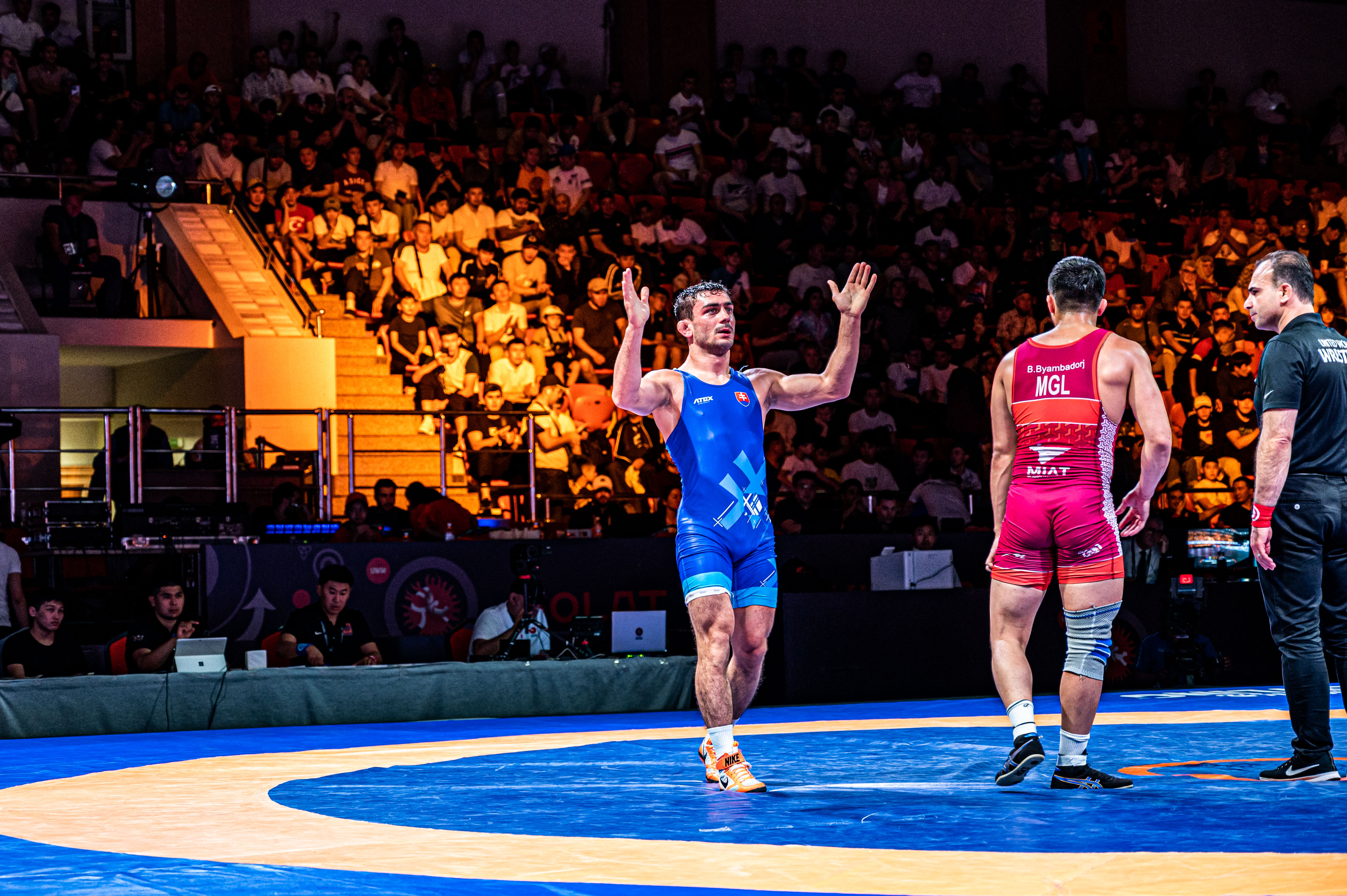 European champion Tajmuraz SALKAZANOV (SVK) won his first Ranking Series gold medal at 74kg. While he did not look the most aggressive on the mat, he did not allow his opponents to go through their attacks as well.

In the quarterfinal, he wrestled Ikhtiyor NAVRUZOV (UZB) and despite numerous attempts from the Uzbekistan veteran, he kept his defense intact and pulled off a 3-0 win. The semifinal against Asian silver medalist Nurkozha KAIPANOV (KAZ) was a similar affair as the scoreline was 3-1.

From the other side, Byambadorj BAT-ERDENE (MGL) had made it to the final and tried using his underhook defense against Salkazanov but that did not work. The World silver medalist was wrestling with such high pressure that Bat-Erdene gave up four stepout points. Salkazanov eventually won 8-0. 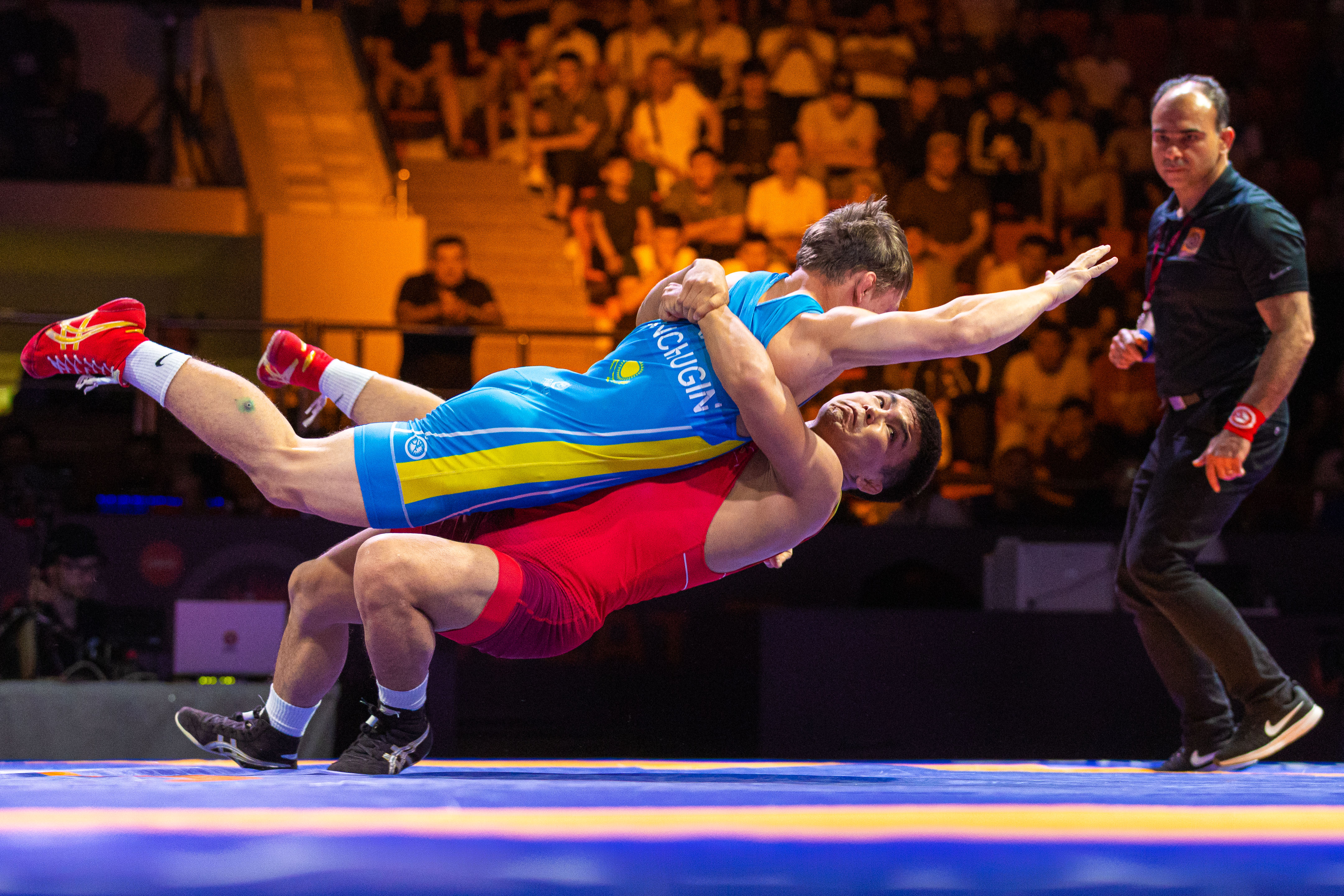 In a contrasting final at 70kg, U23 world champion Ernazar AKMATALIEV (KGZ) recovered from a shock start against Rodion ANCHUGIN (KAZ) to secure a fall after a 10-7 score.

But he did have a scare at the start when after getting an arm throw for four, teenager Anchugin scored a reversal and a gut wrench. He went for another attack but Akmataliev was ready and defended it with a cartwheel which resulted in Anchugin going out of bounds.

Before Akmataliev could settle down again, Anchugin added two takedowns to take a 7-5 lead. The bout had seen 12 points inside the first two points and it got the local crowd going.

It was at this moment when Akmataliev took a step back and slowed the pace of the bout. The two got in a scramble and Akmataliev scored an exposure and held Anchugin in a cradle to secure the fall with four seconds remaining in the first period.

Akmataliev was all praise for the Kazakhstan wrestler but said that he expected a final of this sort because he is not familiar with his opponent.

"The Kazakhstan wrestler is quite young," Akmataliev said. "I knew he would do something I wouldn’t expect, so I was ready for everything. As I expected, his wrestling was something new to me, he started at a quite high pace. I made a mistake and he caught me, but later I could score back and finally win. I am sure this wrestler will show himself up and well wrestle each other again."

Akmataliev won silver at 70kg in Oslo but he is focused on converting it to gold in Belgrade.

"I was in very good shape in Oslo," he said. "Unfortunately I couldn’t win the gold medal. As soon as we go back from Almaty, we will start training for Belgrade and I’ll do my best to win the gold."

Before Oslo, he also participated in the Tokyo Olympics at 65kg but suffered a 3-3 loss to eventual bronze medalist Bajrang PUNIA (IND) in the opening round. Akmataliev said that if given a chance, he would like to avenge that loss.

"There isn’t any specific wrestler who is really tough, all of them are," he said. "However, I had a very sad loss to Bajrang at Tokyo Olympics, I would like to wrestler him again and take revenge." 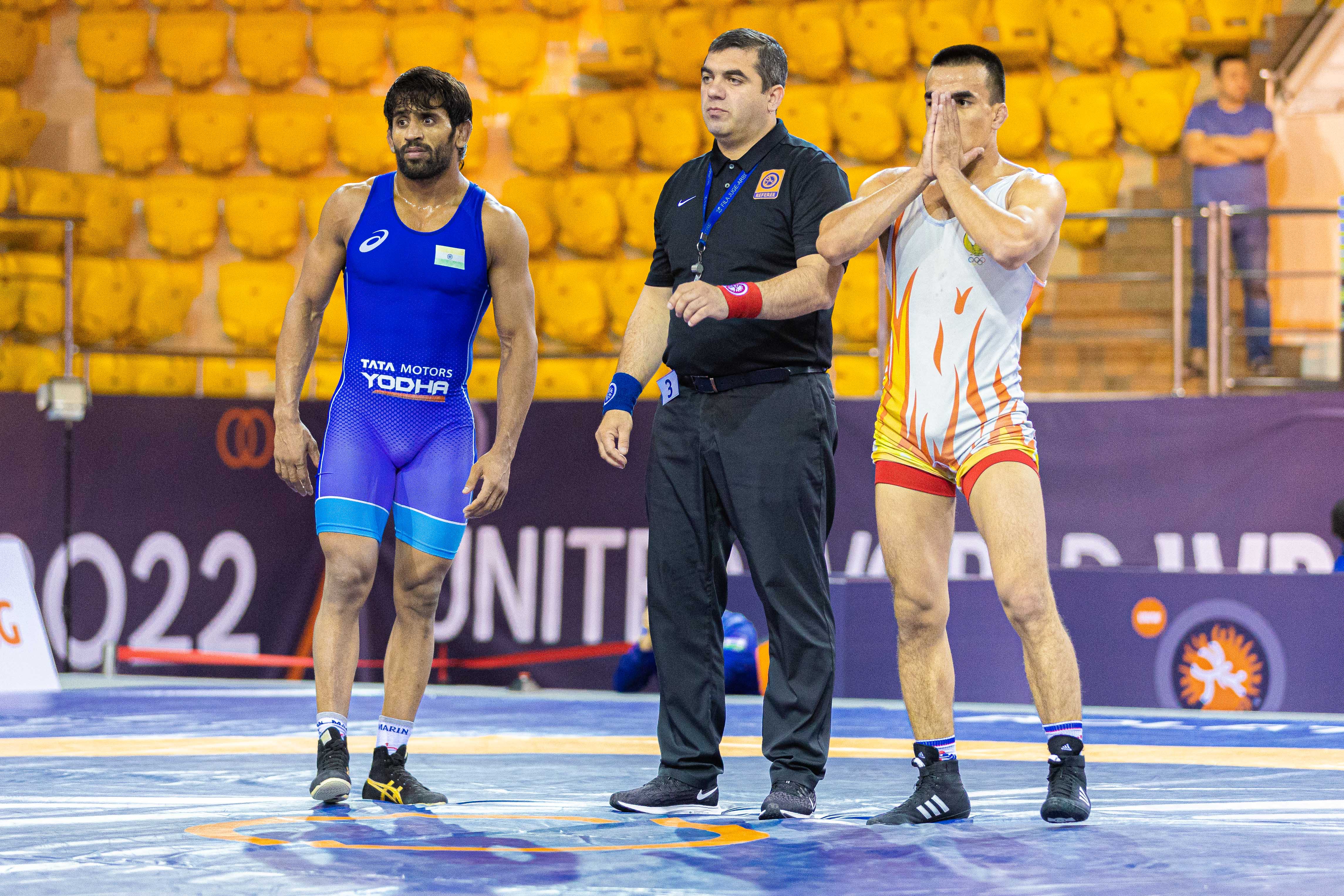 At 65kg, Punia's unbeaten record at five Ranking Series was finally ended as he suffered a shock loss to Abbos RAKHMANOV (UZB) in the opening round. After getting two points for Rakhmanov's negative wrestling, Punia's looked like a shadow of his old self and failed to get going. Rakhmanov kept up the pressure and ended the first period with 2-2 criteria lead after a takedown.

He was hit with passivity in the second period and then Punia decided to defend his 3-2 lead for a full minute. But Rakhmanov scored two points with exposure in the dying moments of the bout to win for the first time against Punia in the third attempt.

He reached the final against world bronze medalist Tulga TUMUR-OCHIR (MGL) but could repeat his performance from the morning and lost 6-1, giving the Mongolian his first Ranking Series gold.

Punia won the bronze while the other bronze medalist was former U17 world champion Umidjon JALOLOV (UZB).

India did win a gold in Almaty as Aman SEHRAWAT (IND) mounted an inspiring comeback against Merey BAZARBAYEV (KAZ) in Round 5 at 57kg.

He trailed 6-0 at one moment but Bazarbayev had little gas left in his tank as Sehrawat continued to attack. He eventually won 10-9 and won gold, an improvement from his bronze in Istanbul.

But the result was reversed at 79kg as Bolat SAKAYEV (KAZ) beat Saiakbai USUPOV (KGZ), 2-1 to win the gold to the home crowds' delight.

The Ranking Series action will now shift Matteo Pellicone to Rome, Italy. The tournament will take place from June 22 to 26.