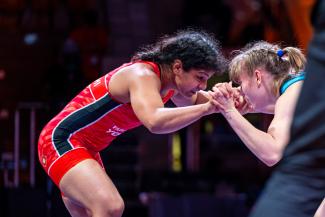 ALMATY, Kazakhstan (June 9) --- Indian women showed up to the Bolat Turlykhanov Cup with their sights set on grabbing critical Ranking Series point. They had wrestlers reach the finals in six of the final seven weight classes and left Kazakhstan with five champions. They rounded out the women's wrestling side of the competition as team champs with with 192 points -- 21 points ahead of second place Kazakhstan

The host nation finished with six medalists -- including a pair of gold-medal winners -- and 171 points. Uzbekistan rounded out the top three in the team standings with 121 points. They also had six wrestlers reach a podium position.

Here are the 10 women's wrestling finals from Almaty.

Eshimova injury defaulted out of the finals, giving Bat Ochir the 53kg title.

The second gold medal for Kazakhstan came from Marina Sedneva (KAZ) who defeated Shokhida Akhmedova (UZB), 4-3 in the 55kg final. She was called for passivity in the first period but hit a four at the start of the second to lead 4-1. Akhmedova managed to get an attack late in the bout and scored two points for danger but failed to get another as the time expired.

For Ahlawat, it was a confidence-boosting win as she continues to remain in the shadow of world silver medalist Anshu Malik (IND) and two-time Asian champion Sarita Mor (IND) at 57kg.

In a strong performance in Almaty, Ahlawat defeated Emma Tissina (KAZ) twice to claim the gold medal. The two met in the morning session in Round 3 which the Indian won 6-0. She then defeated another Kazakhstan wrestler Laura Almaganbetova (KAZ) via fall in the semifinal.

Tissina put up a better challenge in the final as she stopped Ahlawat from her attacks. But she gave up a point for passivity and two more stepouts to lose 3-0.

That all changed in 2020 when she won her first Asian gold medal at home in New Delhi. She defended her title in Almaty last year and added a World bronze medal in Oslo at 59kg.

"Earlier, my wrestling was very defensive," Mor said. "But for the last three years, I have managed to make some progress and improve it. I have benefitted from wrestling at numerous competitions and I hope to continue that to rectify my mistakes."

The change, as Mor explains, is brought about by her coach Rahul Mann (IND).

"My coach and husband Rahul has worked a lot on me," she said. "The most important one is to be active at the start of the bout. I used to stand in a lazy position at the start and give up points. But now it's changed. From the start till the final whistle, I have to wrestle."

She executed that plan to perfection in Almaty, dominating her competition as she gave up only two points in her four bouts. In a Nordic bracket, she began the day against Diana Kayumova (KAZ), handing her an 11-0 defeat in Round 1. She would have liked to avenge her Asian Championships loss to Shoovdor Baatarjav (MGL) but the Mongolian forfeited.

Mor had Aizhan Ismagulova (KAZ) in the semifinal and after a slow start, she switched gears and scored takedowns to lead 6-2 at the break. Two minutes into the second period, Mor clinched a spot in the final with a technical superiority win. U23 European champion Zhala Aliyeva (AZE) was the next to fall against Mor as she clinched the gold with a series of exposures.

"I am feeling so good and I have had 4 competitions here. Apart from the Asian qualifiers here I have managed to win a medal here. The best feeling is always when the Indian flag is raised," she said.

After a medalless start to the year in Istanbul, Mor won a bronze at the Asian Championships and now gold in Almaty. She has now set her eyes on winning the title at the World Championships.

"At Worlds, I lost 3-0 in the semifinal, but now I want to win the belt for India," she said. "As I said, I am continuing to improve with every tournament."

Malik, who reclaimed the starting spot at 62kg on the Indian team after beating Tokyo Olympian Sonam Malik (IND) for the first time, defeated Irina KUZNETSOVA (KAZ) twice in dominating fashion to win the gold medal.

The two met in the first round and Malik used the classic turks to finish the bout 10-0. She was supposed to meet Tserenchimed SUKHEE (MGL) in the semifinal but the Mongolian had failed to register at the weigh-ins. Sukhee had defeated Malik at the first Ranking Series event in Istanbul.

After both qualified for the finals, it seemed that Kuznetsova will be able to give a stronger fight as she pulled off a four-pointer to lead 4-3. But Malik kept her calm and secured the fall in the second period.

Perhaps it was her performance that rubbed off on her teammates as well. Manisha, who had suffered an 11-0 loss to Tokyo Olympian Elis Manolova (AZE) in the first round, recovered to win the gold at 65kg by beating Manolova.

The Indian was first put on the clock for inactivity but she scored a takedown and a stepout during the activity period to lead 3-0 at the break. Instead of going for attacks, Manisha decided to counter Manolova's attempts and was successful in scoring two go behinds.

As the clock ticked, frustration crept in for Manolova as she was warned for negative wrestling, giving the Indian another point. Apart from the two bouts against Manolova, Manisha outscored her opponents 21-0 and saved the best for the last with a strong counter-attacking game.

In the third round, she met Bolortungalag Zorigt (MGL) who had one fall and a loss in which she got only one classification point to be at six. To win the gold, she had to pin Kakran but could manage only a 14-10 win which gave Kakran the gold.

The bronze medal went to Enkhsaikhan who defeated Kairgeldinova 11-0 in the third round.

U20 Worlds silver medalist Bipasha (IND) could have made it three gold medals for India but Asian champion and World silver medalist Zhamila Bakbergenova (KAZ) denied her at 72kg.

The two wrestled in Round 3 which was virtually a gold medal bout after both had one win each in the morning session. Bakbergenova built a 5-0 lead in the first period and extended it to 7-0 within the first 30 seconds of the second.

Bipasha, 20, took some time to understand her opponent and it was only in the fourth minute of the bout that she tried attacking. She managed a takedown and stepout and Bakbergenova was cautioned twice for passive wrestling. But the Kazakhstan wrestler held off Bispasha and won the gold with a 7-5 scoreline.

The Istanbul Ranking Series winner Medet Kyzy had built a 4-0 lead with two takedowns but Hamza surprised her with a four-pointer to lead 4-4 at the break. Hamza tried defending the criteria lead but Medet Kyzy put her in danger with a two-on-one move. Hamza challenged the four-point call and lost as she had clearly landed on her shoulder.

From 9-4, the Asian champion quickly made it 13-6 with a whizzer but gave up two points in the same sequence. She then controlled the bout against a tiring Hamza scoring a takedown and a gut wrench to finish the bout.