UWW renews WISH partnership, 6 coaches to be in high-performance program

CORSIER-SUR-VEVEY, Switzerland (May 31) -- Continuing its push for gender neutrality and to provide more opportunities for women to progress into leadership roles, United World Wrestling (UWW) has renewed its partnership with Olympic Solidarity for the Women in Sport High Performance Pathway, also known as the WISH Programme.

Six current and/or future coaches have been selected for the 21-month program, which has been developed in coordination with a team of specialists at the UK-based University of Hertfordshire. The program aims to help women coaches, who have the potential and ambition, to progress into high-performance coaching roles at national and international levels.

The WISH initiative took shape following a discussion between stakeholders on the ways to address the low percentage of women coaches at an elite level. At the Tokyo Olympics, for instance, even though 48 percent of the athletes were women, just 13 percent of the coaches were female. The program was thus launched to bridge this gap.

Wrestling was among the six sports that were a part of the successful pilot program, which ran from 2019 to 2021.

In this edition, three-time world champion Martine DUGRENIER (CAN), former World Championship silver medalist Aline DA SILVA (BRA) and Australia’s Carissa HOLLAND are a part of the first group of 22 coaches from 20 NOCs and seven sports, who began their training in May. Olympic medalists Guzel MANYUROVA (KAZ), Marwa AMRI (TUN) and Happiness BURUTU (NGR) will be a part of the next batch that starts training in August.

The participants were chosen on the basis of extensive selection criteria set by the WISH management group. The guidelines include the requirement of the candidate to be recognized by the national and international federations as well as the NOC of being, or having the potential to be, a part of the national delegation to major international tournaments, having no history of anti-doping or other ethics violation, ability to commit to the whole program and having good written and spoken English (min IELTS 6.5).

The training module includes eight online leadership sessions, eight leadership mentor sessions, four sport-specific mentor sessions and a five-day residential session in the UK. The IF supports the coaches selected for the program with direct funding of US $3,500 in addition to sport-specific mentor fees and travel, accommodation and developmental costs. 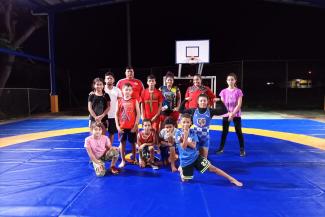 With excellent management from the Panama Olympic Committee and the Panama National Wrestling Federation, together with the Development Department of the UWW, these mats were delivered to Panama.

One of the mats was given to the Barraza Pitbull Club, affiliated with the Panama National Wrestling Federation, and to celebrate such an important contribution to sports development; the club held sports gathering with athletes from the provinces of Cocle, Colon, and Panama at the Jesus Master Gomez Gymnasium in the popular Barraza neighborhood in Panama City.

The new mat will be available for the benefit of children and young sportsmen and athletes of the community. President of the Panama Olympic Committee, Damaris Young was also present at the occasion.

The second donated mat was donated to the Provincial League of Herrera, which will make it available to the wrestlers of the region at the Pepe Osorio Gymnasium in Chitré.

These actions taken by the UWW are an incentive to continue promoting wrestling in countries that do not have significant development in the sport.

All mats in the development mat program are a benefit of the partnership between United World Wrestling and Taishan. For Taishan mats, please contact [email protected]