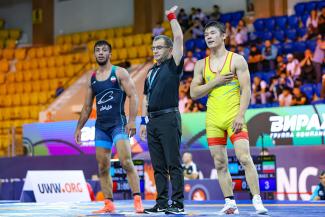 ALMATY, Kazakhstan (June 3) -- Mohammadreza GERAEI (IRI) may be unbeatable for many. But not for Meiirzhan SHERMAKHANBET (KAZ), who has made a habit of beating the Olympic champion.

Shermakhanbet maintained his 100 percent record over Geraei by handing him his fourth loss in four meetings with the latest coming Friday in front of his home crowd at the Bolat Turlykhanov Cup in Almaty.

"It was the fourth time I wrestled against Geraei," Shermakhanbet said. "We know each other very well. Even though he is an Olympic champion, it was the 4th time I've defeated him."

Geraei, however, walked away with the 72kg gold after Shermakhanbet pulled out of the final to not aggravate a shoulder injury he suffered in the first round of the morning session.

Seven Greco-Roman gold medals were decided Thursday with Iran and Turkey winning three each while the remaining one going to Uzbekistan. Iran, Kazakhstan and Kyrgyzstan won one each on the second day of the competition.

Iran won the team title with 185 points while Kazakhstan came second with 165 points. Uzbekistan managed to finish third with 108 points while Turkey was fourth with 100 points.

But the biggest talking point of the tournament will be Geraei's epic surrender against the '22 Asian champion. 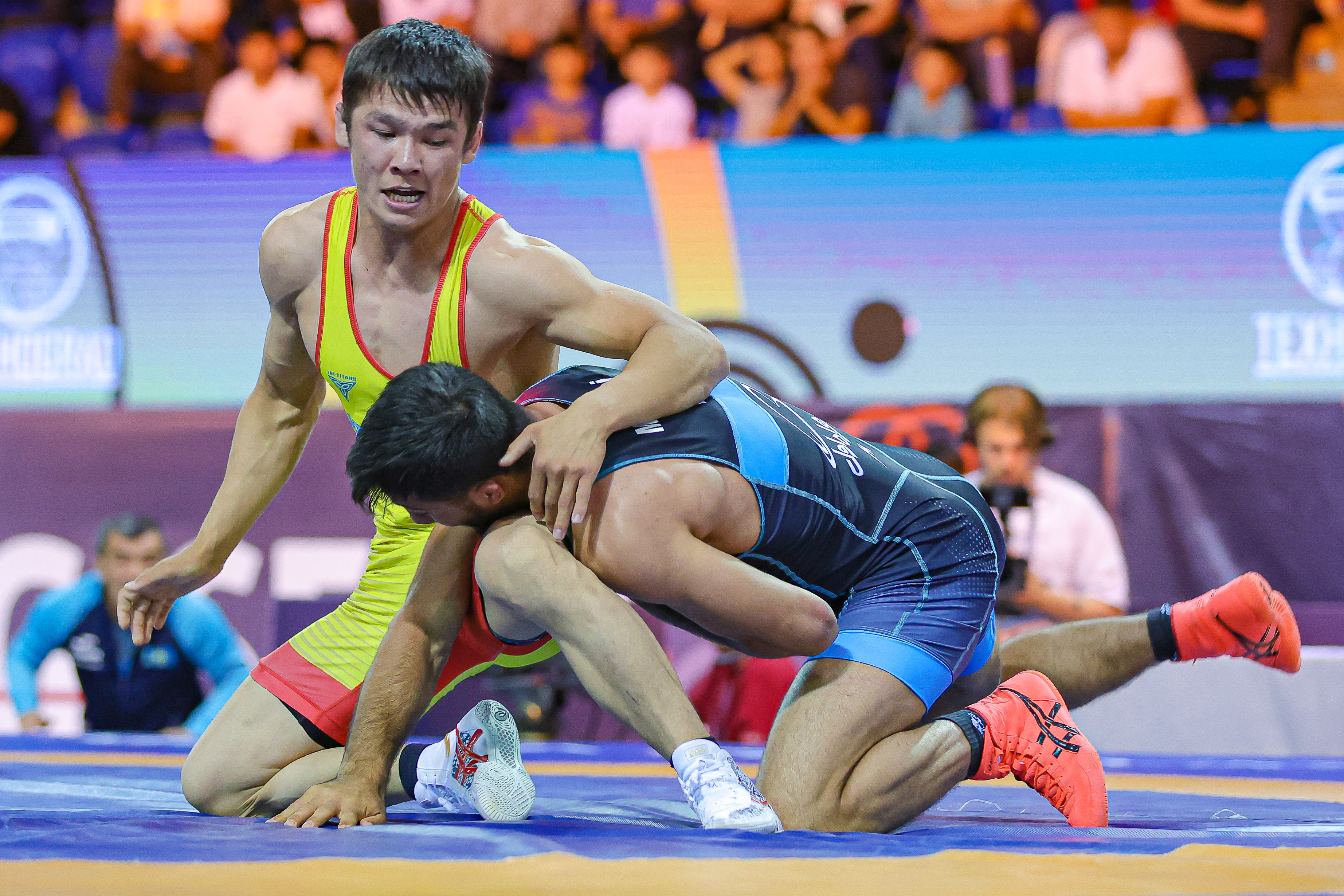 Incidentally, the first three meetings between Sherkhanbet and Geraei were all in 2018. He first defeated Geraei via fall at the prestigious Takhti Cup and six months later he won 6-3 in the final at the Hungarian Grand Prix. The third clash was at the World Championships in Budapest where Shermakhanbet won a bronze medal. On his way, he defeated Geraei 9-0 in the quarterfinal.

In Almaty, the two met in the second round of the 72kg weight class and after Geraei was called passive in the first period, Shermakhanbet exposed him thrice from par terre to lead 7-0. But Geraei was unfazed.

He had been in such a situation at the Olympics and World Championships but managed to recover and win, earning him the nickname 'The Iceman'.

But Friday was different as Shermakhanbet kept the pressure on Geraei and held on to his defense as well. He was called passive in the second period which gave Geraei a glimmer of hope but he could only get two points from par terre.

The two had moved up to 72kg from their preferred 67kg but are expected to return to the weight class and hopefully clash again.

"I am the team leader at 67kg, although this time I decided to compete at 72kg in order not to cut weight," Shermakhanbet said. "I was full of energy, so the tournament went well for me. In September I am planning to compete at the World championships at 67kg, I am going there for a gold medal only. I want to raise the Kazakhstan flag."

Reflecting on his loss, Geraei said that being away from competition for eight months may have made him rusty but is looking forward to a meeting in Belgrade, Serbia.

"I competed with little training and preparations," Geraei said. "I had not wrestled for 8 months after Norway. I was able to learn more about my weaknesses and errors and am going to work on them to improve them.

"I hope he can come to World Championships in Serbia and be able to win against all his competitors so we can wrestle against each other in the finale or the group selections." 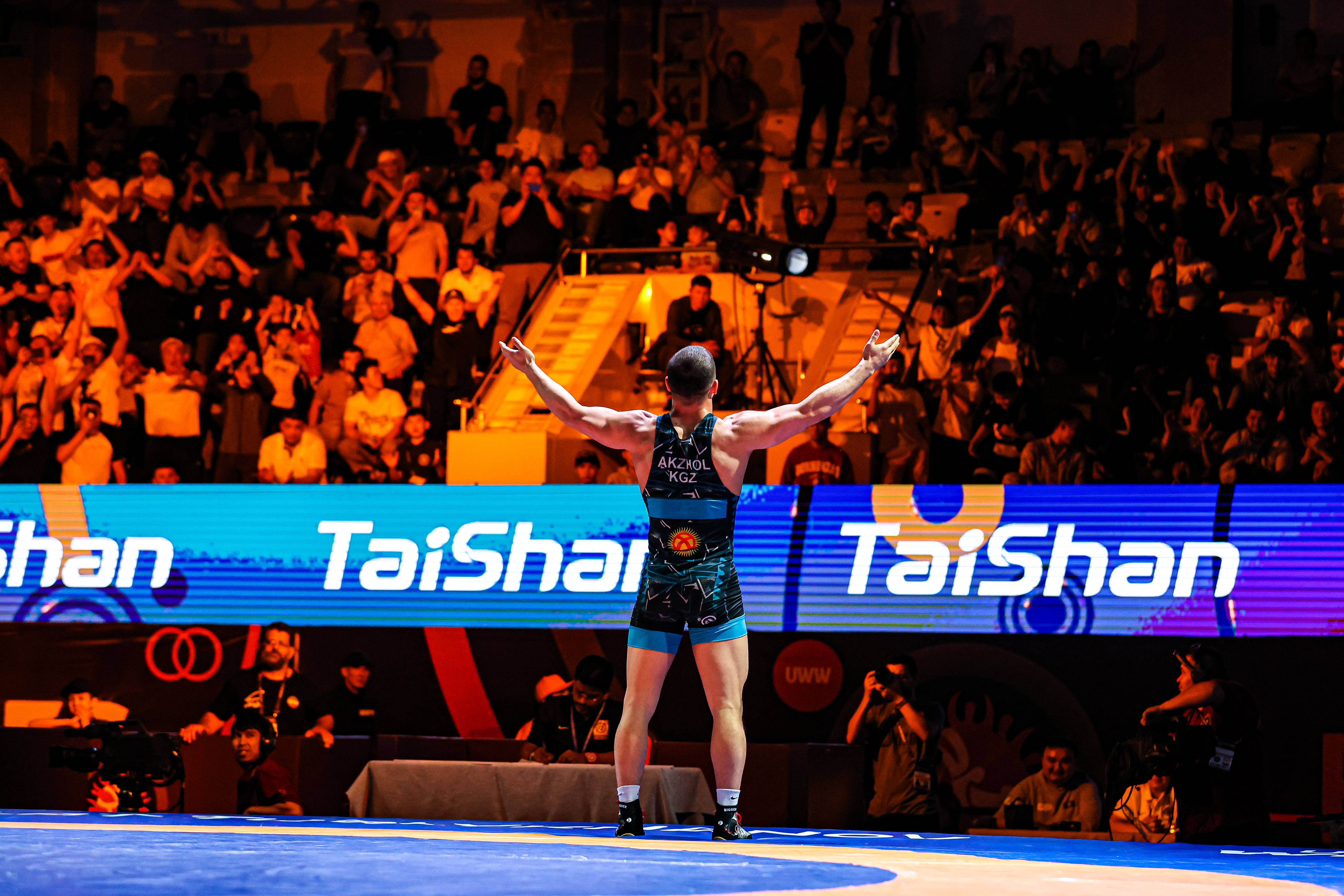 Makhmudov clashed with Akbudak in the quarterfinals and led 4-3 at the break despite giving up a passivity. He added another point in the second period to extend his lead to 5-3. Akbudak scored a stepout with two seconds remaining and got another point as Makhmudov was warned for fleeing. But Makhmudov held on for a 5-5 criteria win.

In the final, he made it look easy against Poshtam. He used two head-pinches for four points each to win 9-0.

"Today I've wrestled well, but not perfect," Makhmudov said. "I wasn't in my best shape, because I caught a cold. That's why I was trying to be active right from the beginning of the match. If I had given up some points, I wouldn't have been able to score them back."

Makhmudov's experience of wrestling at the Olympics and other high-level events is reflected in his game plan. He said that he is planning in advance for everyone.

"I am getting ready for every match, analyzing the wrestling of each opponent," he said. "I was getting ready for the final match the same way, so everything was planned in advance, you can now call me a 'professor.'"

The third Greco-Roman gold went to Kaharman KISSYMETOV (KAZ) as he defeated Demeu ZHADRAYEV (KAZ), 5-4 in an all-Kazakhstan final. The former rode on his four-point throw in the first round to win the gold. Zhadrayev got a gut wrench from par terre but it was not enough to overtake Kissymetov's five points. 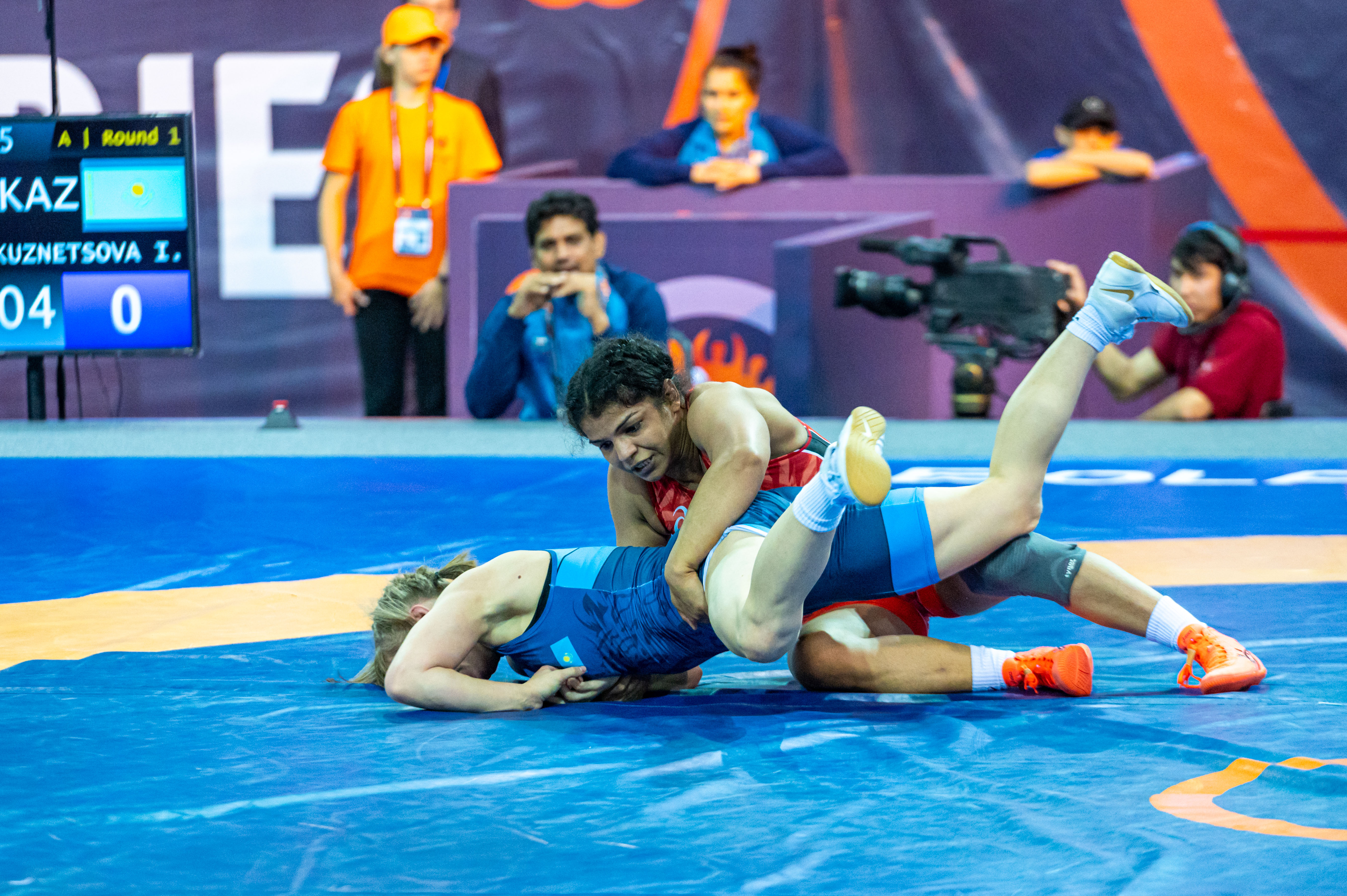 Malik, who reclaimed the starting spot at 62kg on the Indian team after beating Tokyo Olympian Sonam MALIK (IND) for the first time, defeated Irina KUZNETSOVA (KAZ) twice in dominating fashion to win the gold medal.

The two met in the first round and Malik used the classic turks to finish the bout 10-0. She was supposed to meet Tserenchimed SUKHEE (MGL) in the semifinal but the Mongolian had failed to register at the weigh-ins. Sukhee had defeated Malik at the first Ranking Series event in Istanbul.

After both qualified for the finals, it seemed that Kuznetsova will be able to give a stronger fight as she pulled off a four-pointer to lead 4-3. But Malik kept her calm and secured the fall in the second period.

In the third round, she met Bolortungalag ZORIGT (MGL) who had one fall and a loss in which she got only one classification point to be at six. To win the gold, she had to pin Kakran but could manage only a 14-10 win which gave Kakran the gold.

The bronze medal went to Enkhsaikhan who defeated Kairgeldinova 11-0 in the third round.

For Ahlawat, it was a confidence-boosting win as she continues to remain in the shadow of world silver medalist Anshu MALIK (IND) and two-time Asian champion Sarita MOR (IND) at 57kg.

In a strong performance in Almaty, Ahlawat defeated Emma TISSINA (KAZ) twice to claim the gold medal. The two met in the morning session in Round 3 which the Indian won 6-0. She then defeated another Kazakhstan wrestler Laura ALMAGANBETOVA (KAZ) via fall in the semifinal.

Tissina put up a better challenge in the final as she stopped Ahlawat from her attacks. But she gave up a point for passivity and two more stepouts to lose 3-0. 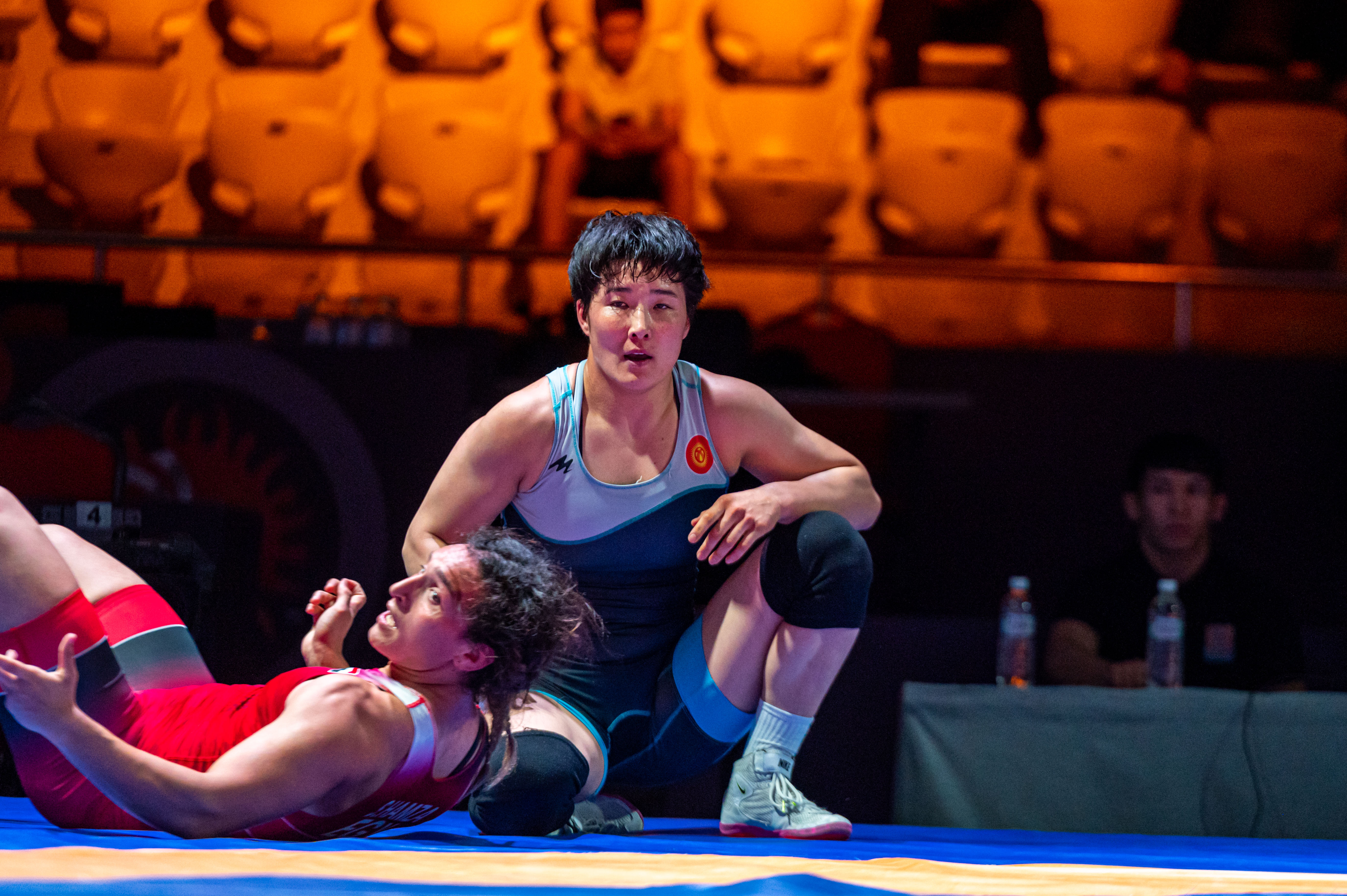 The Istanbul Ranking Series winner Medet Kyzy had built a 4-0 lead with two takedowns but Hamza surprised her with a four-pointer to lead 4-4 at the break. Hamza tried defending the criteria lead but Medet Kyzy put her in danger with a two-on-one move. Hamza challenged the four-point call and lost as she had clearly landed on her shoulder.

From 9-4, the Asian champion quickly made it 13-6 with a whizzer but gave up two points in the same sequence. She then controlled the bout against a tiring Hamza scoring a takedown and a gut wrench to finish the bout.