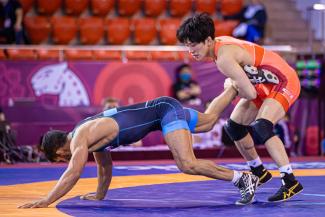 There won't be a crowd to go crazy, but the atmosphere will be electric when Takuto OTOGURO (JPN) and Bajrang PUNIA (IND) clash for the third time in their budding rivalry after both advanced to the 65kg final as the freestyle competition started Saturday at the Asian Championships in Almaty.

Otogoro will defend the title he won a year ago -- by beating Punia before his home crowd in New Dehli -- in the feature match of the five finals to be held in the night session at the empty Baluan Sholak Palace of Culture and Sports.

Ravi KUMAR (IND) will also put the title he won in 2020 on the line at 57kg when he takes on Alireza SARLAK (IRI), one of three Iranians who secured places in the gold-medal matches. Kazakhstan has two finalists, and Korea and Uzbekistan one each.

Few can forget the first Otoguro-Punia showdown, at the 2018 World Championships in Budapest for the gold medal. In a classic that was named that year's UWW Freestyle Match of the Year, Otoguro emerged from a non-stop whirlwind battle with a 16-9 victory.

Otoguro dominated the rematch in New Dehli, winning 10-2, and Punia will seek revenge as the two prep for the ultimate prize at the Tokyo Olympics. Both have already earned their spots in Tokyo, Punia after taking a bronze medal at the 2019 World Championships in Nursultan and Otoguro by placing fifth.

On Saturday, neither encountered any trouble on the mat, although Otoguro could not hide his frustration with the constant grabbing of fingers by semifinal opponent Morteza GHIASI CHEKA (IRI).

Otoguro cruised to an 8-2 victory over the Iranian, with two of his points coming on penalties for finger-grabbing and the rest from takedowns off his trademark single-leg attack.

For Otoguro, just back into competition for the first time since last year's tournament is a pleasure in itself.

"It was fun, it's been one year," he said. "Of course, I have wrestled [Punia] several times, so I think it will be an exciting match."

Asked about his condition, he smiled and replied, "I didn't get the coronavirus, so I'm OK."

Punia, limited to just an activity-clock point in the first period, turned it on in the second against Bilguun SARMANDAKH (MGL), spinning behind for a takedown then using grapevine legs and a crossface to turn him over. In the end, he shifted around to the front and secured a fall in 4:42.

Punia arrived in Almaty coming off a victory at last month's Matteo Pellicone tournament in Rome. Now assured of a sixth Asian medal, he will be aiming to make it his third gold.

Kumar, also Tokyo-bound as a 2019 world bronze medalist, earned a chance for back-to-back titles when he recorded a late 10-0 technical fall over an outclassed but valiant Ali ABURUMAILA (PLE) in the semifinals.

"The championship is not at the highest level so I was just trying to be relaxed," Kumar said. "I am wrestling after four months so I was just keeping it simple. It'll all about managing your body.

"The final is against Iran, but I am just focusing on my wrestling, and my style is something I am very confident about."

Kumar built a 5-0 lead going into the second period, but Aburumaila bravely fought on, twice tackling the Indian to his backside but being unable to finish off the moves and gain the points.

Kumar ended the match with a takedown with :08 left on the clock.

Aburumaila, just the fourth Palestinian to ever compete at an Asian Championships, showed he has the moves when he made it to the semifinals with a 7-4 victory over Hyeonsik SONG (KOR).

"I am without any coach here and this is my first international tournament," said Aburumaila, who still has a chance to become Palestine's first-ever Asian medalist. "It is a dream for every wrestler to wrestle at such a stage.

"To reach the semifinal is itself a great thing for me. I hope the level in my country will increase. I need to get better in wrestling if I want to win something. Maybe a coach should also be here to help me."

Sarlak, a 2019 world U-23 bronze medalist, assured himself of a medal after a seven-place finish last year when he scored an early takedown and then three stepouts to defeat Yuto TAKESHITA (JPN) 5-1 in the other semfinal.

"You have to be very careful about wrestling Japan wrestlers in the lightweight categories," Sarlak said. "They have high speed and agility. Thank God I was able to beat him."

At 79kg, 2020 bronze medalist Ali SAVADKOUHI (IRI) advanced to the final with an 8-2 victory over Galymzhan USSERBAYEV (KAZ). He will face 2018 Asian Games bronze medalist Byungmin GONG (KOR), who got a stepout point with :37 left clinch a 5-5 victory on criteria over Narsingh YADAV (IND).

"I hope with the prayers of my people I can win gold here," said Savadkouhi, the 2019 Asian U-23 champion. "I had to wrestle hard against the Kazakhstan wrestler to reach the final. So now I  will try to do the same and continue wrestling hard from first minute in the final as well."

Savadkouhi made it to the semifinals with the most exciting match of the session, a barn-burning 14-10 victory over Saiakbai USUPOV (KGZ) in which he had trailed 8-5 going into the second period.

Another 2020 bronze medalist with a shot at gold is Alisher YERGALI (KAZ), who powered his way to a 6-2 victory at 97kg over Altangerel CHINBAT (MGL) that included five stepouts.

"My wrestling today was very good and I have been planning for this," said Yergali, who secured an Olympic spot by placing fifth at the Nursultan worlds. "Now in the final I want to wrestle till the end because everything is on line here. It's in my hands to win or lose, so I will give everything on the mat to win the gold."

Yergali will have his hands full with Ali SHABANIBENGAR (IRI), a 2018 world U-23 bronze medalist who dominated in his two matches. After a technical fall in the quarterfinals, Shabanibengar needed just 24 seconds to pulverize Satywart KADIAN (IND), getting a quick takedown and reeling off four gut wrenches for a 10-0 rout.

The 70kg final will pit Sirojiddin KHASANOV (UZB) against Syrbaz TALGAT (KAZ). Khasanov, who was fifth in 2019, scored six points in the final 50 seconds to defeat Perman HOMMADOV (TKM) 8-3, while Talgat had a pair of takedowns in a 6-2 win over Seungbong LEE (KOR).

Early in the session, two silver medalists from 2020 were knocked out of the running for gold with losses just minutes apart.

Hikmatullo VOHIDOV (TJK) was knocked out in the 57kg quarterfinals by Takeshita, who countered a throw attempt for 2 points in the second period and added an activity clock point in a 4-1 victory.

At 70kg, Amirhossein HOSSEINI (IRI) saw his bid to improve from silver to gold end in the first round when Karan MOR (IND) scored a takedown in the final 30 seconds to notch a 3-1 win.

Mor subsequently lost in the quarterfinals to Talgat, ending the Iranian's tournament.