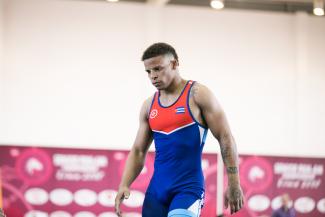 LIMA, Peru – All three Cuban finalists came away with gold in the first day of Greco-Roman competition at the 2018 Pan American Championships in Lima, Peru. The team was led by 2016 Olympic champion Ismael BORRERO MOLINA, who won the title at 67 kg.

Also a 2015 World champion, Borrero capped off a perfect day on Thursday, defeating Manuel Alejandro LOPEZ SALCERO (MEX) with an 8-0 shutout en route to his fourth overall Pan Am gold and first since 2014. It was Borrero’s fourth tech of the day as he outscored the field 40-0.

At 130 kg, Oscar PINO HINDS (CUB), a 2017 World bronze medalist, won his third-consecutive continental title with a 5-0 win over Robert Timothy David SMITH (USA). Pino opened the match with a big four-point throw to put himself in the lead early.

The other Cuban to walk away with gold was Luis Alberto ORTA SANCHEZ (CUB), who was awarded a win by injury default over Jancel Miguel PIMENTEL GONZALEZ (DOM) in the 60 kg finals.

The USA also had multiple champions on Thursday with Ryan MANGO (USA) and Ravaughn PERKINS (USA) winning at 63 kg and 72 kg, respectively.

63 kg champion Mango had his hand raised in victory by medical forfeit to complete a solid 4-0 day.

Other champions on the night included Sargis KHACHATRYAN (BRA) at 55 kg and Luillys Jose PEREZ MORA (VEN) at 97 kg. 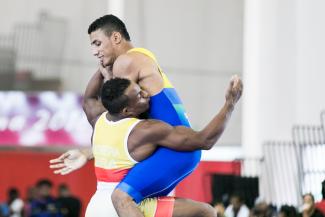 LIMA (May 4) – Friday morning’s session of the 2018 Pan American Championships wrapped up with a few surprises as 2017 Junior World champion Kamal BEY (USA) was knocked out of the competition when he suffered a broken rib in his first round of action at 77 kg.

Bey was going back and forth with two-time Pan American silver medalist Jair CUERO MUNOZ (COL) when the setback occurred. Bey was then forced to medical forfeit out of the tournament.

Cuero moved on to the finals at 77 kg and will do battle with 2018 Central American and Caribbean Championships gold medalist Ariel FIS (CUB).

Other notable happenings from Friday morning included 2017 World bronze medalist Becka LEATHERS (USA) sealing a gold medal at 55 kg after she defeated the other two competitors in the field, Lady MORAN VALENZUELA (ECU) and Cara NANIA (CAN). It is her second-consecutive Pan Am title.

Moran Valenzuela and Nania will wrestle for silver tonight.

Also already securing a gold medal is Luis AVENDANO ROJAS (VEN), who has posted a 3-0 record at 82 kg in Greco, so far. Earlier in the day, he defeated the only 3-1 wrestler in the field, Geordan Speiller, a 2016 Pan Am champion, with an 8-0 tech fall.

At 87 kg, the third Greco weight of the day, past Pan American medalists Yorgen COVA PULIDO (VEN) and Daniel GREGORICH (CUB) sailed to the finals and will face each other tonight for the crown.

Gregorich defeated Ben PROVISOR (USA) in a rematch of last year’s Pan Am finals. Their last meeting ended in a 2-2 decision for Provisor. Not only did Gregorich flip the result but he also widened the gap, picking up a 9-0 technical fall.

On the women’s side, Andribeth RIVERA (PUR) knocked off two-time Pan American champion and 2012 Olympian Kelsey CAMPBELL (USA) with an decisive 10-4 win to put herself in position for gold at 59 kg, which is also a round robin weight.

Rivera will face off against Laurence BEAUREGARD (CAN) for the top prize in tonight’s session.

There were no matches wrestled at 65 kg in women’s freestyle as there are only two competitors in the bracket, counting 2017 Pan Am bronze winner Forrest MOLINARI (USA) and three-time University World medalist Breanne GRAHAM (CAN). The two will go head to head tonight for gold.

The final round of 72 kg competition will be contested tonight with three in the hunt for the top of the podium. Veronica KEEFE (CAN) leads the pack with a 2-0 record so far. She will take on Diana CRUZ ARROYO (PER), who is 1-1, suffering a loss to Josselyn PORTILLO MEJIA (ESA), who is also 1-1 on the day. Portillo Mejia will meet up with Hannah GLADDEN (USA) tonight.

The finals are set for 7 p.m. ET and can be watched live on unitedworldwrestling.org.