MINSK, Belarus (July 24) --- The regular season comes to an end this weekend in Minsk, Belarus, as 175 wrestlers from 19 nations will take part in the final Greco-Roman Ranking Series event of the year, the Oleg Karavaev. The tournament’s entry list is littered with world-level talent, including 24 wrestlers who are ranked inside the top-20 of the latest Greco-Roman rankings, but it’s Emrah KUS (TUR), the No. 1-ranked wrestler in the world at 82kg, who headlines the nearly 200-man field.

The world runner-up’s weight is set to feature six ranked wrestlers -- which is the most top-20 guys entered in one bracket. Kus' most significant competition in Belarus will be Viktar SASUNOUSKI (BLR) and Rajbek BISULTANOV (DEN).

Bisultanov will be looking to take down top-ranked Kus and Sasunouski for the second time this season. The Danish wrestler defeated Sasunouski, 8-1 in the European quarterfinals, then followed that up with a 5-5 criteria victory over Kus in the semifinals en route to his first continental title three months ago in Bucharest.

Kus and Sasunouski have been in several brackets together over the past year but have somehow managed to miss wrestling each other. Most recently, they were in the same bracket at the European Championships, where Kus finished in third place and Sasunouski fell to a disappointing seventh-place finish.

Four Ranked Wrestlers at 67kg and 130kg
A pair of other stacked weight classes to keep an eye on are 67kg and 130kg. Both weights house a quartet of the world's top-20 competitors.

At 67kg, second-ranked RYU Hansu (KOR) leads a pack of four ranked wrestlers into Minsk. The 2017 world champion is the clear favorite to win the weight -- having already won titles this season at the Asian Championships and the Hungarian Grand Prix, while also finishing in third place at the Sassari City Tournament.

Japan will be sending a pair of top-ten wrestlers who’ll try to halt Ryu’s quest of winning a second 2019 Ranking Series title. The Japanese duo who sits inside the top-ten that are making the trip to Belarus are Tsuchika SHIMOYAMADA (JPN) and Shogo TAKAHASHI (JPN). They’re ranked ninth and tenth, respectively. Though Shimoyamada is ranked higher, Takahashi, who was this year’s Asian bronze medalist, has already been named Japan’s Nur-Sultan world team representative.

The fourth-ranked wrestler competing at 67kg will be Mohamed ELSAYED (EGY). Elsayed, the reigning U23 world champion, is ranked 17th in the world coming into the Oleg Karavaev.

The third weight with at least four ranked wrestlers entered is 130kg.

The front-runner at 130kg is Korea’s KIM Minseok. He’s currently ranked fourth in the world but is on the verge of locking up the third seed. Kim, the returning world bronze medalists, is only five points away from passing Heiki NABI (EST) for that third slot, and will gain the advantage after collecting the six entry points if he participates this weekend.

But, to do so, he’ll have to battle three heavy hitters in Muminjon ABDULLAEV (UZB), Yasmani ACOSTA FERNANDEZ (CHI), and MENG Lingzhe (CHN), who are ranked fifth, sixth, and ninth, respectively.

Kim Looking for Third Ranking Series Title
KIM Seunghak (KOR), the third ranked wrestler in the world at 60kg, comes into the Oleg Karavaev with hopes of luring in his third consecutive Ranking Series title.

Kim started his season with a fifth-place finish at the Grand Prix of Zagreb, but has since won back-to-back Ranking Series golds after title-winning performances at the Hungarian Grand Prix and the City of Sassari tournament in Sardinia.

Kim is stationed 14 points behind Victor CIOBANU (MDA), last year’s world runner-up, but could pass the Moldovan wrestler if he reaches the top of the podium for a third consecutive time. A gold medal this weekend would give Kim 16 Ranking Series points -- which would give him the two-point advantage over Ciobanu heading into Nur-Sultan.

The Japanese star has two world titles to his name. His most recent world title coming at the U23 age level last season, while his senior-level world title came back at the 2017 Paris World Championships.

Bakhromov is ranked 15th in the world, but that's down at 55kg.

Top-Two Matchup Brewing at 63kg
A showdown between two of the best 63kg wrestlers in the world could be on the horizon as No. 2 Elmurat TASMURADOV (UZB) and No. 3 Erbatu TUO (CHN) are both entered into the Oleg Karavaev.

Tasmuradov and Tuo met in Xi’an, China, earlier this year in the gold-medal bout of the Asian Championships with Tuo earning the continental title after Tasmuradov was forced to withdraw from the competition after suffering an apparent hip injury. During the time of the injury, Tasmuradov was leading 3-2 but surrendered two points from a caution-and-two and fell behind, 4-3 -- which is when he conceded the match.

The Oleg Karavaev marks the first time that Tasmuradov has competed since facing that hip injury. He comes into Minsk with a six-point advantage over Tuo, and could lock up the second seed by collecting 10 Ranking Series points.

Kuliyeu Eyeing the Fourth Seed at 87kg
Radzik KULIYEU (BLR) comes into Minsk as the sixth ranked wrestler in the world at 87kg but is in perfect position to grab the fourth seed with a podium finish this weekend.

The reason being, Hungary’s Erik SZILVASSY and Viktor LORINCZ are ranked third and fourth, respectively, but will have to forfeit one of the top-four spots because each nation can only enter one wrestler per nation into the World Championships. Hungary’s forfeiture of one of their top-four seeds will slide Islam ABBASOV (AZE) into the fourth seed, but since he’s not competing this weekend, Kuliyeu just needs nine points to overthrow the Azeri for the fourth spot.

Kuliyeu will be joined by two other top-ten wrestlers at 87kg. They are ninth-ranked Mikalai STADUB (BLR) and tenth-ranked Rustam ASSAKALOV (UZB).

The first set of brackets will be released on Thursday at 17:00 and wrestling will begin on Friday at 10:30 (local time). 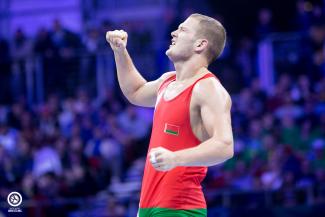 MINSK, Belarus (July 28) --- Viktar SASUNOUSKI (BLR) gave the host nation one of their four Oleg Karavaev golds and sealed up the third seed at September’s World Championships with a late clutch throw in the 82kg finals against the No.1-ranked wrestler in the world Emrah KUS (TUR).

In the opening period of the gold-medal match, Sasunouski conceded an inactivity point and an exposure and fell behind 3-0 to last year’s Budapest world runner-up. Sasunouski scored first in the second period and trailed 3-1 when he threw a desperation headlock -- which was good enough to pick up two correct throw points. Sasunouski hung on to edge Kus, 3-3 on criteria.

Sasunouski came into the Oleg Karavaev as the fourth-ranked wrestler in the world at 82kg, but after his title-winning efforts in his home country, he’s passed Iran’s Saeid ABDVALI for the third seed heading into Nur-Sultan.

The three other Belarusians gold medalists were Pavel LIAKH, Radzik KULIYEU and Siarhei STARADUB. They won their titles at 77kg, 87kg and 97kg, respectively.

In 77kg gold-medal match, Liakh cruised to an 11-0 win over Japan’s Shohei YABIKU and earned his second career Oleg Karavaev gold medal, but first since the 2016 season.

Kuliyeu earned the hard-fought victory in the 87kg finals over Dogan GOKTAS (TUR) and will move into the fourth seed at the World Championships. Hungary’s Erik SZILVASSY and Viktor LORINCZ are ranked third and fourth, respectively, but will have to forfeit one of the top-four spots because each nation can only enter one wrestler per nation into the World Championships. Hungary’s forfeiture of one of their top-four seeds moved Islam ABBASOV (AZE) into the fourth seed, but since he’s didn’t compete this weekend, Kuliyeu needed nine points to overthrow the Azeri for the fourth spot. He ended up collecting 16 Ranking Series points and is now the fourth-ranked wrestler in the world at 87kg.

The final Belarusian gold medal of the tournament went to Siarhei Staradub who took down Suleyman DEMIRCI (TUR), 6-1 in the 97kg finals.

Belarus (147 points), on the backs of the four gold medalists, won the team title two points ahead of second-place Russia (145 points). Turkey rounded out the top three of the team race with 113 points.

Kim Wins Third Consecutive Ranking Series Title
KIM Seunghak (KOR) came into Minsk riding one of the hottest streaks in all of wrestling and added yet another Ranking Series title to his resume with a 3-1 victory over Ahmet UYAR (TUR) in the 60kg gold-medal bout.

Kim started his season off with a fifth-place finish at the Grand Prix of Zagreb, but has since won Ranking Series golds at three straight events. He's had title-winning performances at the Hungarian Grand Prix and the City of Sassari tournament in Sardinia and now the Oleg Karavaev.

Kim has now earned the second seed at 60kg. He was stationed 14 points behind Victor CIOBANU (MDA), last year’s world runner-up, but with the 16 points he earned at the Oleg Karavaev, the Korean passed the Moldovan wrestler for the world’s second Ranking.

ElSayed Wins Battle of Past World Champs
In a battle of past world champions, Egypt’s Mohamed ELSAYED stuck RYU Hansu (KOR) in the 67kg finals after dominating the match from whistle-to-whistle.

Ryu was clearly frustrated when he got up to his feet and demanded that his corner challenge the initial four-point action -- saying it was a leg four. Ultimately, an additional point was tacked on for the failed challenge and ElSayed grabbed his first Ranking Series title of his career.