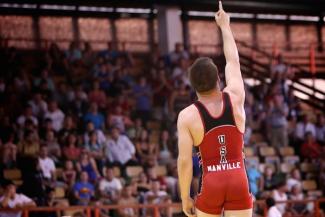 HUMENNE, Slovakia – Mason MANVILLE (USA)  and Spencer LEE (USA) rolled to impressive wins on the opening day of the freestyle events at the Cadet Wrestling World Championships, but Russia surged into the lead in the team rankings with one champion and two silver medalists.

Lee unleashed a torrent of takedowns on European champion Afgan KHASHALOV (AZE) for a technical fall for the gold medal at 50kg, and Manville was the aggressor throughout the 69kg final as he claimed a 5-0 triumph over Radik VALIEV (RUS).

Despite the heroics of Lee and Manville, the U.S. languished in fourth place in the team standings with only 26 points after the first day of freestyle.

Russia grabbed the first day lead with a gold medal from David BAEV (RUS) at 58kg, a pair of silver medals and 37 points, while Azerbaijan is second with 34 points, mostly from 85kg champion Shamil SADULLAYEV (AZE) and two silver medals.

Iran is in third place with 28 points after its only finalist Alireza GODARZI (IRI) won the 42kg with a late takedown.

50kg (24 entries)
Spencer LEE (USA), a seventh place finisher one year ago, scored with four different attacks from the feet and shut out European champion Afgan KHASHALOV (AZE), 11-0, in the gold medal final.
Asia silver medalist Nader NASRISAMAKOUSH (IRI) hit high single-leg takedowns on both sides of the intermission for a 5-1 win over continental rival Vasant Kolekar PRAKASH (IND) and a bronze medal.

Nicolai GRAHMEZ (MDA) rolled up a technical fall in 61 seconds with three straight gut wrenches against Balazs EGYED (HUN) for the other bronze.

58kg (26 entries)
David BAEV (RUS) scored three takedowns over the first three minutes and then gave two points back with fleeing-the-hold penalties, but it was enough for a 6-3 win over Makhir AMIRASLANOV (AZE) who had to settle for the world silver medal for a second year in a row.

69kg (27 entries)
Mason MANVILLE (USA), also an entry in the Greco-Roman competition earlier in the week, passed behind a surprisingly static Radik VALIEV (RUS) twice in the second period to seal a 5-0 win in the gold medal bout.

European silver medalist Alberts JURCENKO (LAT) scored a double-leg takedownin the second period and followed with back exposure to hand Samuel SCHERRER (SUI) a 5-0 decision for one bronze medal, while Gheorghi PASCALOV (MDA) slipped behind Asia champion Pritam PRITAM (IND) in the final 20 seconds for the other.

85kg (21 entries)
European champion Shamil SADULLAYEV (AZE) opened with an inside leg trip to takedown and cruised to a 4-1 win over Semih YAZICI (TUR) and his first world title after a bronze medal at 69kg in 2012.

Ilja MATUHIN (GER), took a punch during an apparent quarterfinal loss, but was declared the winner by disqualification and came back for the bronze medal with a 5-1 win over Hovhannes MKHITARYAN (ARM).