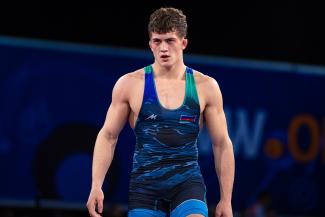 1320: We finish the session with an incredible comeback from Ivailo TISOV (BUL) against Demin LIUTCANOV (MDA). He was down 8-2 and then 14-8 but secures a fall to move into the semifinals at 57kg.

1310: Senior World bronze medalist Horst LEHR (GER) was trailing 2-0 until the final minute but blasted a double leg attack and secured the fall

1245: Nicolai GRAHMEZ (MDA) looks unstoppable today. He has his second fall of the day he moves into the 70kg semifinals

1240: What a bout we had. Bayramov and Alaca put on a show for the fans. Bayramov began with a four-point double and then laced two times to lead 9-1. But Alaca scripted a comeback to be 11-8 but Bayramov stayed composed to win it.

1200: Georgios KOUGIOUMTSIDIS (GRE) with a fall over Abdulvasi BALTA (TUR). The two were involved in a tough battle but the Greece wrestler with a big four-pointer to lead 13-3 but secured the fall

1143: Ugrelidze with a small comeback as he cuts Alaca's lead to 8-4. There is still a minute to go in the bout. Can the Georgian cause an upset? He can't. Alaca wins 8-5.

1130: Cadet world champion Hamza ALACA (TUR) is now on Mat A against Gia UGRELIDZE (GEO). He starts with a takedown and then two leg laces to make it 5-0. A duck under for two more.

1115: Welcome to day five of the U23 European Championships in Plovdiv. We will have Hrachya MARGARYAN (ARM) beginning against Dominik LARITZ (SUI) on Mat A 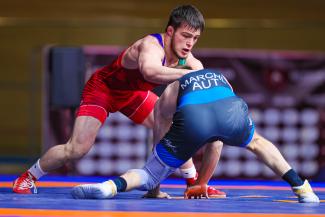