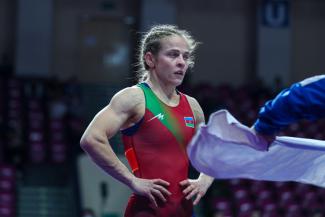 13:16: That does it for the morning session. We'll see you back here at 18:00 for Thursday's women's wrestling medal matches.

12:36: Very limited action in that semifinal, but Rotter Focken holds on to criteria and reaches the finals with a 1-1 win over Olympic champ Wiebe. She'll take on the winner of Aiperi MEDET KYZY (KGZ) and Epp MAEE (EST).

12:22: I'm not sure how today flew by so fast, but we're already to the Day Three semifinals. We'll wrap up these final matches on each mat and roll right into today's semifinals.

12:18: If there's such thing as too many world champions wrestling in one day, today is that day! One world champion walks off Mat A and another one walks on! Mat A welcomes Bulgaria's Taybe Yusein!

12:15: What a show Tynybekova and Ovcharova are putting on! There are 18 points on the board already and we still have two minutes left to go!

12:04: Stadnik is on fire today. She's won both matches by technical superiority.

12:03: Stadnik is back up again. She's wrestling Golston on Mat A. Stadnik scored two early takedowns and leads 4-0 after the opening 45 seconds.

11:41: Olympic champion Erica Wiebe built a substantial lead over on Mat C. It looks like she's going to close things out with a 7-0 win over Elmira SYZDYKOVA (KAZ). Weibe will wrestle the winner of Bout 119 (Mat A) between Aline DA SILVA FERREIRA (BRA) and Aline ROTTER FOCKEN (GER)

11:31: Olympic bronze medalist and four-time world medalist -- including '13 world champion -- Maria SASTIN (HUN) are squaring off on Mat B. Amri leads 1-0 after the first period.

11:24: Quick suggestion: do not take down Stanik. Vuc took her down and led, 2-0. Stadnik proceeded to score 12 points in 25 seconds and moved into the quarterfinals where she'll wrestle the winner of Erin Simone GOLSTON (USA) and Weronika SIKORA (POL).

11:15: For a second time this season, Olympic champion Natalia VOROBEVA (RUS) defeats Vasilisa MARZALIUK (BLR). She also beat her in the finals of the European Olympic Qualifier. Today, the final score was 4-1 in favor of the Russian.

11:14: World bronze medalist Epp MAE (EST) is making her tournament debut on Mat A. This is her first competition since back since becoming Estonia's first woman to win gold at the European Championships. She's wrestling Aysegul OZBEGE (TUR).