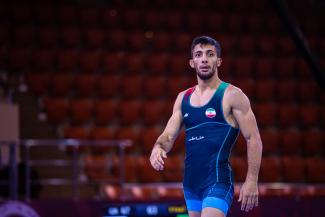 World and Olympic champion Mohammadreza GERAEI (IRI), Akzhol MAKHMUDOV (KGZ) and Burhan AKBUDAK (TUR) will be in action for the day.

13:45: A rematch that Mohammadreza GERAEI (IRI) wanted. He wins his semifinal to get a chance to avenge his loss against Meiirzhan SHERMAKHANBET (KAZ). The two will clash in the 72kg final. Shermakhanbet won the earlier bout 7-3

13:30: As expected, the final at 76kg for women's is set between two World bronze medalists Samar HAMZA (EGY) and Aiperi MEDET KYZY (KGZ)

13:00: Demeu ZHADRAYEV (KAZ) with a strong win over Asian champion Mohammad Reza MOKHTARI (IRI). Zhadrayev was trailing 2-0 at the break but got the activity points and then a turn in par terre. Mokhtari was was penalized for defending before the whitsle. A 5-2 win for Zhadrayev

12:35: No successful comeback this time for Mohammadreza GERAEI (IRI). Asian champion Meiirzhan SHERMAKHANBET (KAZ) scored seven points in the first period while Geraei managed only 3 in the second

12:00: Samar HAMZA (EGY) wins her first bout over Pooja SIHAG (IND). She gets the takedown and then turns Sihag twice using the leg-turk. Hamza finishes it with a 10-0 win.

11:35: Divya KAKRAN (IND) has been in and out of the national team but she marks her return to 68kg with two quick falls in two bouts. Another win will secure her the gold medal

11:00: 'The Iceman' Mohammadreza GERAEI (IRI) trailed Azat SADYKOV (KAZ) for four minutes but then goes for a body lock and secures the pin at 72kg. Effortless from the Olympia champion

10:50: Tokyo silver medalist Azkhol MAKHMUDOV (KGZ) led 4-3 at the break against Burhan AKBUDAK (TUR) before adding a point in the second period to extend his lead to 5-3. Akbudak scored a stepout with two seconds remaining and got another point as Makhmudov was warned for fleeing. But Makhmudov holds on for 5-5 criteria win over the world silver medalist

10:30: Welcome to the second day of the second Ranking Series event of the year. A big day is coming up and the first high octane bout at 82kg as Akzhol MAKHMUDOV (KGZ) and Burhan AKBUDAK (TUR) clash.