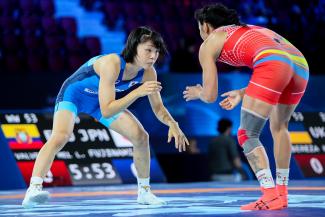 13:54: Khulan BATKHUYAG (MGL) scores all of her points in the first period of her 53kg semifinal against Zhuldyz ESHIMOVA (KAZ) and holds on for a 3-0 victory in the last match of the morning session. That puts the Mongolian into the final against Fujinami -- who beat her by technical fall in the group stage, although she took the match into the second period.

13:42: Anshu MALIK (IND) is stepping on the mat for the first time since the silver medal at Worlds in Oslo and she looks dominant. She begins her semifinal against Bolortuya KHURELKHUU (MGL) with four points and then she builds on it to win 11-0. She will face 55kg world champion Sakurai who goes past Akhmedov 12-2 and also had a four-point tackle in her win.

13:36: Can anyone or anything stop Fujinami. The freshman at Nippon Sports Science University, with her father and coach in her corner, rolled into the final with a 10-0 technical fall over Keunimjaeva. Fujinami scored the final six points with three exposures using a cross-face with legs. Her opponent in the final will be decided in the final match of the session

13:35: Ozaki and Tynybekova have set up a rematch of the 2021 world opening round. Ozaki will be well-rested for the final; she needed just 40 seconds to get a takedown and rip off four straight lace locks in a 10-0 technical fall over Manisha. Tynybekova took 2:24 to record a fall over Esinbaeva.

13:15: Khulan BATKHUYAG (MGL) thrilled the home crowd when, while trailing, she slammed Swati SHINDE (IND) to the mat and clamped down for a fall to finish second in 53kg Group B. That puts her into the semifinals against Group B winner Eshimova. In the other semifinal, Fujinami will face Keunimjaeva.

13:15: Zhamila BAKBERGENOVA (KAZ) and Sumire NIIKURA (JPN) are on Mat B wrestling for a gold medal at 72kg. Bakbergenova will win the gold if she wins the match here. But she is trailing 1-0 at the break. In the second period, she is once again put on the clock but she gets a four-point throw. Niikura with a takedown to make it 4-4 but the Kazak wins on criteria.

12:55: Tsugumi SAKURAI (JPN) is wrestling Bolortuya KHURELKHUU (MGL) to confirm the top spot in Group B at 57kg. She begins with a stepout and then adds a takedown to lead 3-0 at the break

12:43: Fujinami was at her dominant best in swiftly putting away Swati SHINDE (IND) 10-0 in 43 seconds to clinch the top spot in 53kg Group A. The Japanese star got a takedown, then twisted Shinde like a pretzel twice for a 6-0 lead, then a pair of lace locks ended the proceedings.

12:42: RADHIKA (IND) was in some trouble early but then secures the fall over Ariukhan JUMABAEVA (UZB) at 65kg. This gives her a chance to return and still be in silver medal contention

12:36: In one of the surprises of the session, unheralded Hyungyoung OH (KOR) jumped out to an 8-0 lead against veteran Eshimova in their 53kg Group B match, only to see the 34-year-old Kazakh storm back with nine points in the final minute. The winning points came on a gut wrench with 8 seconds on the clock.

12:28: Sumire NIIKURA (JPN) may not have been ready for that. Davaanasan ENKHAMAR (MGL) came back every time Niikura scored a takedown with stepout added with cautions to make it 6-6. But she was not able to break the criteria.

12:22: Anshu MALIK (IND) notches up another 10-0 win. She gut wrenches Danielle LIM (SGP) at 57kg. She confirms her spot in the semifinals as the topper of the group

12:21: Dariga ABEN (KAZ) keeps her gold medal hopes alive as she wins 10-0 against Ariukhan JUMABAEVA (UZB). All she needs to do is beat world silver medalist Miwa MORIKAWA (JPN)

12:20: Tsugumi SAKURAI (JPN) gets the cradle against Nilafur RAIMOVA (KAZ) and secures the fall as well at 57kg.

12:11: Zhamila BAKBERGENOVA (KAZ) wins her Round 2 bout against Svetlana OKNAZAROVA (UZB) 13-2 which included a big four-pointer from the Kazak wrestler

12:10: Mira MORIKAWA (JPN) was looking for a pin leading 6-0 but RADHIKA (IND) manages to survive. Morikawa begins the second period with a takedown which was an attempted throw from Radhika. She finishes off with another takedown to win 10-0

12:04: In a match that will likely decide who avoids Fujinami in the semifinals, veteran Zhuldyz ESHIMOVA (KAZ) got the second of the two passivity points awarded, giving her a 1-1 victory on criteria over Aktenge KEUNIMJAEVA (UZB ). Keunimjaeva might be bound for a third straight Asian bronze medal.

12:01: Super-teen and world champion Akari FUJINAMI (JPN) needed a little time to break down the defenses of Khulan BATKHUYAG (MGL) in her opening group match at 53kg, but capped a 10-0 technical fall in 3:24 with a 4-point tackle to the back. The weight class has six entries, and Fujinami is in Group A of the two groups.

11:50: The 62kg division has eight entries, so it is in the usual knockout format. In the semifinals, Tynybekova will face Nabira ESENBAEVA (UZB ), whom she beat by TF at the 2019 Asian Championships in Xi'an. Ozaki will next face Manisha MANISHA (IND)

11:40: World silver medalist Zhamila BAKBERGENOVA (KAZ) is wrestling Davaanasan ENKH-AMAR (MGL). She gives up a point for passivity and gets one as well. But Ekhamar scores a takedown to lead 3-1. Bakbergenova counters with a takedown as well. It's 3-3 Kazakhstan lead and she hangs on to it.

11:35: World champion and Olympic silver medalist Aisuluu TYNYBEKOVA (KGZ) launched her campaign for a fifth Asian title with a steady 7-3 over a tough Khongorzul BOLDSAIKHAN (MGL), a fifth-place finisher at the Tokyo Olympics.

11:30: We're all set for the start of Day 4 of the Asian Championships by finishing up the women's competition at 53kg, 57kg, 62kg, 65kg, 72kg. Mat C will be in the early spotlight, with Miwa MORIKAWA (JPN), Sumire NIIKURA (JPN), Tsugumi SAKURAI (JPN) and Akari FUJINAMI (JPN) up in succession from the second match.