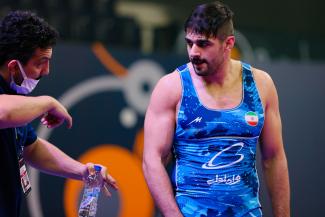 ULAANBAATAR, Mongolia (April 23) -- The Asian Championships move to freestyle on day five. Wrestlers from 57kg, 65kg, 70kg, 79kg and 97kg will be in action in Ulaanbaatar.

13:50: The semifinals and repechage matches are over, bringing a close to the morning session. The crowd has been great, and we can expect some fireworks in the finals starting at 18:00 local time.

13:43: Taishi NARIKUNI (JPN), making his first international appearance since 2017, stormed into the final at 70kg with an 11-5 victory over defending champion Syrbaz TALGAT (KAZ). Narikuni will face world silver medalist Ernazar AKMATALIEV (KGZ) in the final. Interesting to note that Narikuni's mother was a world champion in 1990 and 1991 (as Akiko IIJIMA) and the coach at the kids club where he started wrestling.

13:42: Ernazar AKMATALIEV (KGZ) comes back from 6-3 down and scores a 12-6 win over Temuulen ENKHTUYA (MGL). He added a stepout before launching a gut wrench to secure the win.

13:34: In a rematch of the '20 Asian final, Arsalan BUDAZHAPOV (KGZ) and Gourav BALIYAN (IND) in a back-and-forth bout and Baliyan avenge that loss with an 8-5 victory. He led 2-1 at the break with a counter. But in the second period, the two changed leads three times. Budazhapov scored a stepout before Baliyan added an exposure for two but gave up the reversal and a roll. Budazhapov needed to defend the 5-4 lead for a minute but he failed to keep up and conceded a takedown with 11 seconds remaining. Baliyan won 8-5, making him the third Indian in the final

13:30: Rahman AMOUDZADKHALILI (IRI) gives Iran a third finalist with an 6-0 victory in the 65kg semifinal over Tsogbadrakh TSEVEENSUREN. He'll face Punia for the gold in the night session.

13:28: Rakhat KALZHAN (KAZ) pulls off an amazing comeback to make the final at 57kg. Down 5-0 against Almaz SMANBEKOV (KGZ) going into the second period, he cuts the gap with a takedown. With the clock ticking down, he scores a takedown, then muscles Smanbekov over with a gut wrench to go ahead 6-5 with :16 left. He holds on to the end to earn a date in the final against India's defending champion Kumar.

13:25: Ali SAVADKOUHI (IRI) moves into the 79kg final after a 3-0 win over Yudai TAKAHASHI (JPN). He got a point for the passivity of Takahashi in the first period. He was called passive in the second period but he scored a takedown in the activity period.

13:18: Ravi KUMAR (IND) starts out in a 4-0 hole in the 57kg semifinal against a fired-up Zanabar ZANDANBUD (MGL), who scores a takedown and gut wrench in the opening seconds. But the Olympic silver medalist shakes it off and puts on a takedown clinic, reeling off three in a row to go ahead 6-4 at the break. From there he pads the lead and wins 12-5, giving him a shot at a third straight Asian gold.

13:17:Bajrang PUNIA (IND) will make his fourth straight 65kg final at the Asian Championships as he controls his semifinal against Haji ALI (BRN) to win 3-1

13:03: S. TALGAT (KAZ) gets a win by technical superiority and he confirms a semifinal against Taishi NARIKUNI (JPN) who beats Mohammademehdi YEGANEHJAFARI (IRI) 6-2 at 70kg

12:56: Ernazar AKMATALIEV (KGZ) bounces back from 2-0 down to beat NAVEEN (IND) 6-3 and reach the 70kg semifinal. We will be beginning with the semifinals shortly

12:50: Rahman AMOUZADKHALILI (IRI) fills the final semifinal place at 65kg with a workmanlike 8-0 win over Kaiki YAMAGUCHI (JPN). The match was a  battle between current (Amouzadkhalili) and 2019 (Yamaguchi) world junior champions at 61kg. The semifinals will be Bajrang PUNIA (IND) vs Haji ALI (BRN) and Amoudzadkhalili and Tsogbadrakh TSEVEENSUREN (MGL).

12:36: Tsogbadrakh Tseveensuren (MGL) is trailing 4-1 when he twists Alibek Osmonov (KGZ) to his back and secures the fall, much to the delight of the home crowd, to advance to the semifinals at 65kg.

12:35: Ali SAVADKOUHI (IRI) and Byambadorj ENKHBAYAR (MGL) wrestled an action-packed second period at 79kg. Savadkouhi was leading 7-4 before Enkhbayar managed to make it 7-6 with 10 seconds remaining. His last attack did not yield any points as he goes down at 79kg

12:32: Olympic silver medalist Ravi KUMAR (IND) faced tough competition from Rikuto ARAI (JPN), but ultimately overpowered the young Japanese with a run of takedowns for a 15-4 technical fall to advance to the semifinals at 57kg. He will face local favorite Zanabazar ZANDANBUD (MGL) for a place in the final.

12:31: Olympic bronze medalist Bajrang PUNIA (IND) begins his campaign for a third Asian gold at 65kg win a 3-0 win in the quarterfinals over a cautious Abbos RAKHMONOV (UZB ). Punia scored two points on the activity clock and another on a stepout in a match a bit shy of action.

12:30: 2020 champion Arsalan BUDAZHAPOV (KGZ) gets the small contingent of Kyrgyzstan fans going with an 11-0 win over Bumgue SEO (KOR). A series of gut wrenches to finish the bout

12:20: Mohammadhossein MOHAMMADIAN (IRI) could not have begun in a better style. He scores a takedown and then Zyyamuhammet SAPAROV (TKM) is put in par terre for his forced break for bleeding during the action. Mohammadian scores three gut wrenches before closing out a 10-0 win with a takedown

12:19: 2017 silver medalist Zanabazar ZANDANBUD (MGL) gets the crowd roaring as he roars back from a 6-1 deficit to defeat Reza MOMENIJOUJADEH (IRI) 10-6 to advance to the 57kg semifinals. With 1:20 left, Zandanbud starts his comeback with a takedown, followed by two gut wrenches. He adds a stepout, then tackles the Iranian to his back, where he remains as time expires.

12:10: Batzul ULZIISAIKHAN (MGL) was trailing 5-5 against Mamed IBRAGIMOV (KAZ) but then got into a bear hug and scored a big four and win 9-5 at 97kg. The home crowds loves it

12:00: At 97kg, Satyawart KADIAN (IND) shuts out Takashi ISHIGURO (JPN) attacks and counters them with go behinds to win 5-0 in the quarterfinals.

11:52: NAVEEN (IND) with an 11-0 win over Perman HOMMADOV (TKM) at 70kg and he gets World silver and U23 world champion Ernazar AKMATALIEV (KGZ) in the quarterfinals.

11:50: Jasurbek USMONOXUNOV (UZB) did score two takedowns but that was not enough as Bumgue SEO (KOR) hung on for a 5-4 win at 79kg

11:48: Yudai TAKAHASHI (JPN) begins with a four and then adds two takedowns to lead 8-0 against Shuhrat BOZOROV (TJK). A takedown and stepout in the second period gave him the win 11-1

11:46: Tsogbadrakh TSEVEENSUREN (MGL) gets the home crowd charged up when he finished up an 11-0 win over Sanzhar DOSZHANOV (KAZ) with :28 left in their qualification round match at 65kg.

11:45: Rahman AMOUZADKHLILI (IRI), the world junior champion at 61kg, started his campaign at 65kg with an 11-0 technical fall over Inayat ULLAH (PAK) in the qualification round. Amouzadkhlili is the favorite to make the final in the bottom half of the bracket.

11:27: On an overcast morning in Ulaanbaatar, the mat will be shining with Asian's top freestyle wrestlers with competition at 57kg, 65kg, 70kg, 79kg, and 97kg on Day 5. Sit back and enjoy the ride.