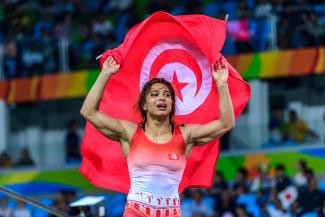 19:20:  The semifinal session just wrapped up. We'll take a few-minute break and roll right into the medal matches.

19:11: This'll be the final match of the semifinal session. We'll take a quick break and roll right into the medal matches.

18:35: How about that? Rckaela AQUINO (GUM) scored five first-period takedowns against Siwar LOUATI BEN ALI (TUN) and booked Guam a ticket to the Olympic Games at 53kg. She's the second women's wrestler ever from Guam to qualify for the Olympic Games.

18:22: After leading 10-0, Joseph Emilienne ESSOMBE TIAKO (CMR) pinned Lamia CHEMLAL (ALG) and qualified Cameroon for the Olympic Games at 53kg. That was her second win of the day via fall. In her first match, Essombe Tiako pinned her '20 finals opponent Bose SAMUEL (NGR) in less than a minute.

18:13: There's going to be one more 50kg Round 4 match. After that, the next four matches will determine Olympic berths as 53kg and 57kg are traditional brackets.

18:07: We're back to action! The match order is posted below. Outside of 53kg and 57kg, the majority of these matches will be Nordic-style bracket matches -- meaning the winners may not punch their nation's tickets to Tokyo. They'll have to finish in the top two to book a spot at the Tokyo Olympics.

12:40: That concludes the morning session. We'll return at 18:00 for the women's wrestling Tokyo Qualification round.

12:13: What a match! Amri comes out on top, 3-1. She waited for the inactivity clock to expire, and once it did, she struck with a takedown and won by two points. Smart wrestling on behalf of the Tunisian.

12:03: One of African women's wrestling biggest rivalries Amri and Adeniyi just started on Mat B.

11:57: This session is flying by! We only have two matches left on each mat.

11:39: That didn't last too long! Hamza was quick to hit a nasty headlock. She pinned Zaineb SGHAIER (TUN) and will wrestle Debora TURE (GBS) in two matches on Mat C!

11:30: Samar HAMZA (EGY) is coming up next on Mat A. The reigning African champ is ranked No. 2 in the world at 76kg after her runner-up finish at the '21 Matteo Pellicone in Rome earlier this year.

11:22: Amri only led 1-0 after the first frame but is a different wrestler here in the second. She stopped an attack from Berthe ETANE NGOLLE (CMR) then snagged two gut wrenches and closed out the match 7-0. Amri's next match will be against Aminat ADENIYI (NGR) -- the last African wrestler to hand her a loss.

11:10: We barely had time to get situated and we already had a '20 African finals rematch go down! Joseph ESSOMBE TIAKO (CMR) hip tossed Bose SAMUEL (NGR) and earned the 24-second fall. That match was in the opening round at 53kg.

11:00: We're ready to get things roll on Day 2! Below you'll find the opening round match order for the morning session.