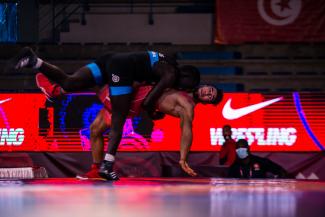 1845 hrs: American Samoa have to wait for their third freestyle wrestler at Olympics. Amr Reda Ramadan HUSSEN (EGY) shatters the dreams of Elias Lauofo VAOIFI (ASA) with a 10-0 win at 74kg semifinal

1830 hrs: Adama DIATTA (SEN) qualifies Senegal for the Tokyo Olympics. What a stunning performance from the Rio Olympian as he beats Aime Mbolalalaina Joel RAKOTONIAINA (MAD) 10-0 in the 65kg semifinal

1825 hrs: Three takedowns and a point for stepout. It's 10-0 win for Diamantino IUNA FAFE (GBS) as he qualifies his country for the Games.

1820 hrs: Diamantino IUNA FAFE (GBS) with a point for activity and a takedown to lead Chakir ANSARI (MAR) 3-0 at the break in the second semifinal at 57kg.

1813 hrs: Algeria with the first Olympic berth of the night! Abdelhak KHERBACHE (ALG) mounts a strong comeback to beat Junjun ASEBIAS (FSM) 15-8 to qualify his nation for the Tokyo Games

1805 hrs: Asebias with a takedown and a gut to lead 6-1 against two-time African champion Kherbache. He gets another takedown but Kherbache with a four! Asebias 8-5 at the break

1800 hrs: We're back! Abdelhak KHERBACHE (ALG) is wrestling Junjun ASEBIAS (FSM) for a place in the 57kg final. The winner also earns a ticket to Tokyo

1745 hrs: We are 15 minutes away from the second session in Hammamet. Mat B will see all the action of the qualifiers

1245 hrs: We have are semifinalists! 24 wrestlers are now locked in and will wrestle for the 12 Olympic spots on offer in Hammamet

At 97kg, Mohamed SAADAOUI (TUN) will wrestle Hosam Mohamed Mostafa MERGHANY (EGY) in the first semifinal while Soso TAMARAU (NGR) will be wrestling Mohammed FARDJ (ALG) in the second semifinal

1215 hrs: Senegal's Rio Olympian Adama Diatta will be looking to qualify for the Games again as he makes his way to the semifinals at 65kg. He will take on Aime Mbolalalaina Joel RAKOTONIAINA (MAD)

1200 hrs: We have our first set of semifinals for the night. The two winners will get a ticket to Tokyo Olympics. At 86kg, Jayden Alexander LAWRENCE (AUS) vs Ekerekeme AGIOMOR (NGR) and Khaled Masoud Ismail ELMOATAMADAWI (EGY) vs Fateh BENFERDJALLAH (ALG) will wrestle for the two spots in the final

1137 hrs: Senior Africa Championships bronze medalist at 125kg Johannes Jacobus KRIEL (RSA) if knocked out in a thriller. Djahid BERRAHAL (ALG), who was a silver medalist at the same tournament, 8-8

1128 hrs: What a show from local boy Haitem DAKHLAOUI (TUN). The African champion at 70kg starts his qualifying tournament at 65kg with a 14-3 tech victory over Mostafa REZAEIFAR (AUS). Six guts to finish it off

1100 hrs: Hammamet is ready for the final day of wrestling at the African and Oceania Olympic qualifiers.