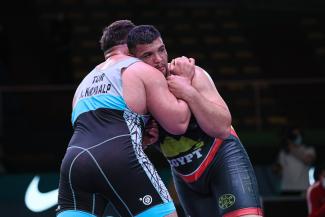 HAMMAMET, Tunisia (April 2) -- The wait is almost over! The highly-anticipated Africa and Oceania Olympic Qualifier kicks off on Friday morning at 11:00 am (local time). Wrestlers who win their semifinal matches and reach the finals at their respective weight classes earn a berth for their nation to the Tokyo Olympic Games.

20:10: In a matchup of last year's African champions, Haithem MAHMOUD (EGY) defeated Abdelkarim FERGAT (ALG), 10-3. He trailed 2-0 in the gold-medal match, but outscored the Egyptian 10-1 to earn the 60kg title.

20:00: We're rolling right into the Greco-Roman finals. First up will be Abdelkarim FERGAT (ALG) and Haithem MAHMOUD (EGY).

19:45: That'll do it for our traditional bracket semifinal matches. The remaining bouts will be Nordic Style bracket matches.

19:32: Bachir SID AZARA (ALG) and Mohamed METWALLY (EGY) both won their semifinal matches and punched Algeria and Egypt's second ticket of the day to the Olympic Games.

19:10: For the second time in his last three matches, Zied AIT OUAGRAM (MAR) trailed 3-0 but somehow found a way to come out on top. He'll wrestle Lamjed MAAFI (TUN) for 77kg gold on Saturday night.

18:12: Fajari leads 3-0 after the first period. He scored an inactivity point and a gut wrench and closed out the period with a three-point lead.

18:00: We're back to Greco-Roman action! This is going to be an emotional session. The first match up will be Abdelkarim FERGAT (ALG) at Fouad FAJARI (MAR) at 60kg.

THE END OF THE MORNING SESSION.

12:58: That'll do it for the morning session. We'll see you back here at 18:00 for the semifinals. The winners of the semifinal matches in the 60kg, 77kg and 87kg traditional brackets book their nation's tickets to the Olympic Games.

12:32: Not so fast, wrestling fans! We still have two matches left in this session.

12:28: Just as I was typing, "We could be witnessing the changing of the guard at 77kg,"  Ait Ouagram picks up a feet-to-back throw and pins. Richard FERREIRA (RSA) The Morrocan trailed 1-0 at the time of the fall.

12:24: Mohamed GABR (EGY) bounces back and picked up an 8-0 opening-period win against Tyler ILI (ASA). Gabr dropped his first match by a point and was clearly upset walking off the mat.

12:07: The arena lights were cut for a minute, but we have power to everything else, so we'll keep things rolling!

11:52: It seems like he just walked off the mat, but Fergat is up again. The reigning three-time African champ is up on Mat A.

11:25: That's how fast a match can change! Ait Ouagram put up five quick points and commands a 5-2 lead with just over one minute left.

11:19: Not too much to say about that opening-round match for Mohamed. He survives and moves into the second round with a 1-1 criteria victory over Amine GUENNICHI (TUN).

11:10: Abdellatif MOHAMED (EGY) is wrestling on Mat C. Prior to COVID hitting, the Egyptian was ranked inside of the top five at 130kg. Mohamed is the favorite to earn at least one of the 130kg Olympic berths.

Wrestling fans, we'll see you back here in the morning to start what's expected to be an emotional weekend! We'll get to watch 18 Olympic dreams come true (six freestyle, six Greco-Roman and six women's wrestling).