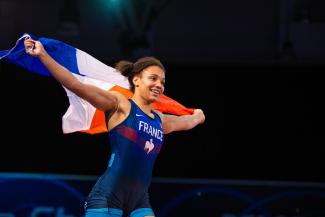 Given her record in wrestling, Larroque could have skipped the ongoing U23 Worlds in Belgrade to focus on the next season after a busy 2021. But a lot had changed since she won the U23 title in Bydgoszcz, Poland.

The 23-year-old won the junior Worlds gold, silver at the senior Worlds in 2018 and was destined for greatness as Tokyo Olympics approached. But tragedy struck on the mat.

During the 2018 World final against Alla CHERKASOVA (UKR), Larroque got caught in a leg lace and injured her knee. The youngster took almost a year to recover but failed to finish on the podium at any world event. She qualified for the Tokyo Olympics but suffered a loss via fall. Two months later, she finished seventh at the Oslo Worlds after dropping a close one to Forrest MOLINARI (USA).

So Belgrade was a final push to finish on a high and regain some lost ground.

“It was my last competition in U23 and I am very happy to win because last month was not easy for me,” Larroque said. “I am happy that I will take some rest after winning a gold medal.”

Larroque, wrestling with a heavily strapped knee, defeated Vusala PARFIANOVICH (RUS) 3-0 after scoring a takedown from an ankle pick and a stepout. With that, she now has a cadet, two junior and two U23 world titles apart from the two medals at the senior level.

Since the Olympics, Larroque has been training away from her personal coach, who is on a break and the French wrestler had to make a few adjustments to her wrestling with the new staff.

“Right now I am at 66kg so it was easier for me to participate in 68kg,” she said. “But in Oslo, I was at 64kg so it was difficult. It was hard for me as my coach is not here and I did not have a lot of preparation.”

But with the sole objective of winning a gold in Belgrade, she came with a set plan of keeping it simple and not being over-attacking. Her first two bouts were high scoring but she took a cautious approach in the semifinal and final, scoring a total of only six points.

Not only Larroque, but her father, who was watching from the stands, wanted his daughter to ascend to the top of the podium after watching her struggle for close to three years.

“I am so pleased,” Stephan LARROQUE said. “She had an injury in 2018 and she has achieved everything on her own so it's great to see her win again.”

Now, the Larroques want her to make the family proud in Paris.

“Before Rio, I thought she will qualify for the Olympics but she did not,” he said. “In Tokyo, I was hoping she will win a medal and I will go but that did not happen. So let's wait for Paris.”

Apart from Larroque, four different nations won a gold medal with three of them being first-timers. Kyrgyzstan, Poland and Romania had their first-ever women's U23 world champions while Emily SHILSON (USA) added to her collection of cadet and junior world titles.

Aiperi MEDET KYZY (KGZ) gave Kyrgyzstan a gold medal when she denied Colombia its first world champion in the 76kg final. Tatiana RENTERIA RENTERIA (COL) led 1-0 at the break against Medet Kyzy but gave up the lead when she was penalized for passivity.

The Oslo bronze medalist from Kyrgyzstan scored a taken in the final 20 seconds to secure a 3-1 win and added another gold to her junior world title.

At 59kg, Anhelina LYSAK (POL) created history by winning her country's first world title at the U23 level as she took out Solomiia VYNNYK (UKR), 7-2, in the finals.

She earned the match’s first point, but gave up a takedown and surrendered the one-point lead heading into the second period. But she bounced back by jacking up Vynnyk with double underhooks and regained the lead with the stepout point.

“I was going for this tournament only to win gold because I knew I am in shape,” Lysak said.

She faced a familiar opponent in the final as Vynnyk and her have been training in Ukraine for a long time.

“She [Vynnyk] is really strong, but I really wanted to win and I was going to get mine,” she said. “Mat is mat but off it we are friends.”

As she graduates to the senior level, Lysak wants to continue winning for Poland especially after breaking the deadlock with the U23 gold.

“This is my job and I am no longer fighting at U23,” she said. “Now I will be a senior and I still want to fight for medals and win as much as I can for the country.” 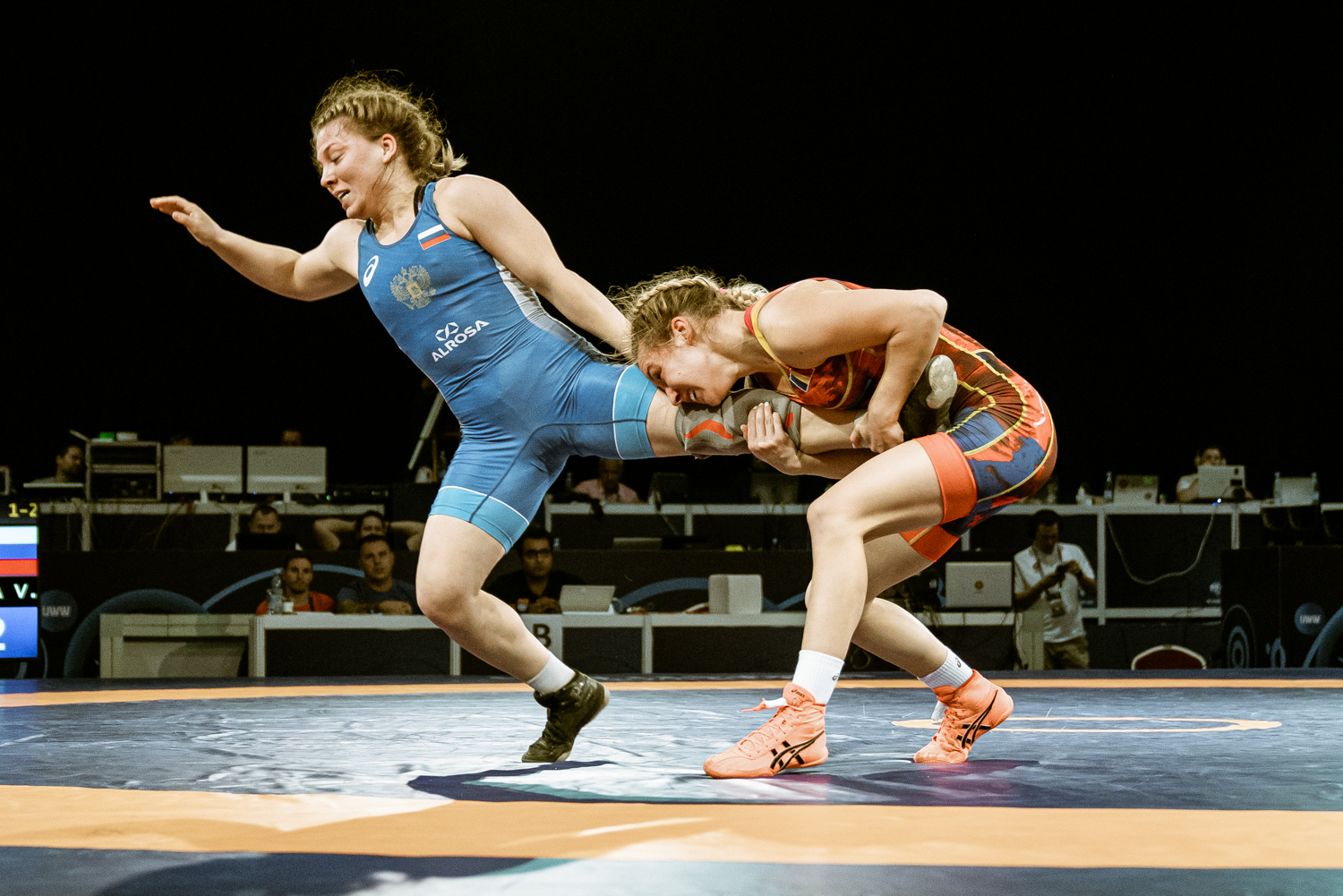 The third historic title was for Romania as Andreea ANA (ROU) clinched a thriller at 55kg against Viktoriia VAULINA (RUS).

The Romanian trailed Vaulina 2-2 with 18 seconds left when she fired off a double leg. Her Russian opponent halted the initial shot attempt, but Ana transitioned to a head outside single leg. She tree topped the leg and kicked out Vaulina’s balancing foot to pick up the match deciding takedown with five seconds remaining.

This was Ana's eighth World Championships and second after Tokyo Olympics as she participated in Oslo before coming to Belgrade. She said that her experience in Tokyo and Oslo helped her win here.

“I am proud of myself,” Ana said. “I improved with my experience as I have wrestled at a lot of competitions. In Tokyo and Oslo, I wrestled good wrestlers who were more experienced than me. I think that helped me to win this medal.”

Ana’s win in Belgrade was an improvement on her ’19 U23 world bronze medal and Romania’s first-ever U23 women’s wrestling world title.

To say Shilson is good is an understatement. The 20-year-old Wednesday joined a small group of wrestlers who have won two world titles in the same year.

The USA wrestler made the trip to Ufa, Russia in August for the junior world championships and dominated her way to the title, something similar to what we saw in Belgrade. In her four matches, Shilson never looked in trouble and won her bouts 10-0, via fall, injury default and a fall.

“Two years ago I did not win a medal at this tournament and now I have so felt awesome,” Shilson said.

In 2019, she finished 11th but did not make any mistake now even after a frantic start to the final against Shivani PAWAR (IND).

Shilson tried to strike early in the first with a single leg, but it was countered by her Indian opponent. While trailing 2-0, she hit a far side headlock and pinned Pawar less than 90 seconds into the opening frame.

Being one of the most active wrestlers in the US, Shilson was aware of the situation the Indian could have put her.

“I knew she was going to be like that be like that, she just wanted scramble,” Shilson said. “I had to get back up, refocus, and get to where I wanted to be, and then I was able to take what she was giving me.”

Shilson will be one of the wrestlers to watch out for as the Paris Olympics approaches and she thinks that she is on the right track in her career.

“In Ufa, I was one of the oldest wrestlers there, and here I am probably on the younger side,” she said. “Being able to go from juniors and step up on another level, U23 is reassuring that I am on the right track.” 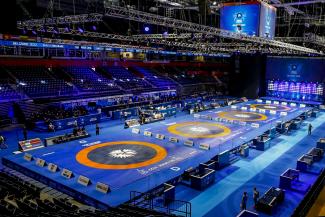 CORSIER-SUR-VEVEY (November 14) -- The World Championships will return to Belgrade, Serbia for the second straight year as it was elected as the host for the 2023 edition on Monday.

United World Wrestling Bureau met Monday to pick the host for the World Championships and locked in Belgrade. Azerbaijan and Turkey also expressed their interest in hosting the mega event but fell short. UWW will continue to work with the national federations of these nations for future events.

UWW President Nenad LALOVIC (SRB) and Bureau members Rodica YAKSI (TUR) and Namig ALIYEV (AZE) did not participate in the voting due to a conflict of interest.

Belgrade, which hosted the 2022 World Championships with grand success, will host the tournament at the beginning of September 2023.

The dates for the tournament are subject to change from the original September 16 to 24 as it clashes with the Asian Games which are scheduled to begin on September 23 in Hangzhou, China.

The World Championships were scheduled to be held in Russia but since International Olympic Committee recommended sanctions on the nation, it became ineligible to host.

Wrestlers will get a chance to win 90 quotas for the 2024 Paris Olympics from the Belgrade Worlds. Any nation which participated in the 2023 continental championships will be eligible to participate in the World Championships.