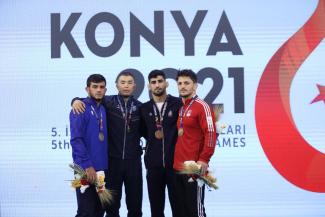 Overall, Iran and Azerbaijan won three gold medals each in both Greco-Roman and women's wrestling and emerged as the top two teams in both styles.

But Saturday belonged to Kyrgyzstan as two-time world silver medalist Zholman SHARSHENBEKOV (KGZ) rose to the top of the podium with a decisive 10-2 win over Murad MAMMADOV (AZE) in the final of 60kg.

Tokyo Olympic silver medalist Akzhol MAKHMUDOV (KGZ) wrestled world silver medalist Sanan SULEYMANOV (AZE) in the 77kg final which turned out to be a close battle. Suleymanov managed to score two points over Makhmudov but the Kyrgyzstan star got a total of four points after Suleymanov was put in par terre. That remained the winning sequence as he captured the gold medal with a score of 5-2.

The third gold of the night for Kyrgyzstan was captured by world champion Meerim ZHUMANAZAROVA (KGZ) at 68kg in women's wrestling.

Olympic bronze medalist Zhumanazarova was on a roll on Saturday and capped off her brilliant performance by pinning 2022 Asian champion Madina BAKBERGENOVA (KAZ) final.

In her previous bouts, Zhumanazarova won three bouts with technical superiority and one via fall. None of her opponents were able to score a single point on the Asian silver medalist.

At 67kg, European bronze medalist Jafarov wrestled Amantur ISMAILOV (KGZ) in the final and put a solid defensive performance to win 3-1. The difference was that Jafarov was able to score when Ismailov was put in par terre while the Kygyrzstan wrestler failed to do so.

For Aliyeva, the 57kg final turned out to be a high-scoring bout against former African champion Omolayo KOLAWOLE (NGR). A total of 20 points were scored in the gold medal bout but Aliyeva, a U23 European champion, won 14-6.

With that gold, Azerbaijan matched the tally of Kyrgyzstan as both countries won three gold medals each. Turkey won two gold medals in the home Games while Nigeria and Kazakhstan managed to win one each.

Carrying a foot injury into the final, Yousefi was determined to step on the top of the podium and managed to hold off Yildirim, 3-2, in the gold medal bout.

The other gold medal went to Jalgasbay BERDIMURATOV (UZB) at 87kg and joined Rustam ASSAKALOV (UZB) as the country's Greco-Roman gold medalist.

In a battle of Asian champions, Berdimuratov faced three-time Asian gold medalist Ramin TAHERI (IRI) twice in the day and won both of the bouts.

The 2019 world bronze medalist defeated first wrestled Taheri in Round 5 of the Nordic bracket but managed to beat the Iranian with the barest of the margins -- 5-5.

The two managed to win their semifinals and wrestled again in the gold medal bout. But Berdimuratov made sure he doesn't run it as close as the Round 3 bout and stunned Taheri with an 11-2 superiority win in the 87kg weight class.

Iran and Azerbaijan finished the Greco-Roman event with three gold medals each while Kyrgyzstan and Uzbekistan shared the remaining 4 other golds by winning two each. 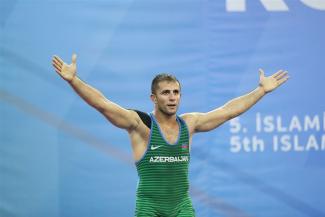 In Greco-Roman, Azerbaijan and Iran shared two golds each while Uzbekistan won one as well. In women's wrestling, Turkey, Kazakhstan and Kyrgyzstan won a gold medal each.

The first gold medal of Greco-Roman wrestling went to Azerbaijan as the 2018 world champion and two-time world bronze medalist Eldaniz AZIZLI (AZE) won by superiority over Jasurbek ORTIKBOEV (UZB) in the final match at 55kg. Azizli got a position in par terre and finished the bout with gut wrenches to win 10-1.

Another world champion doubled the gold count for Azerbaijan. Perhaps one of the most accomplished wrestlers in the field, Rafig HUSEYNOV (AZE) claimed the second gold at 82kg. The 34-year-old, an Olympic bronze medalist, defeated Kalidin ASYKEEV (KGZ), 6-3 in the 82kg final.

Huseynov, the 2022 European champion, struggled a little in the day, especially in his semifinal against Emrah KUS (TUR), which he won narrowly, 2-1.

In the 63kg final, Beheshti Tala was up against 2022 Asian champion Tynar SHARSHENBEKOV (KGZ) and was an underdog. Just when it looked like Sharshenbekov will run away with the gold, Beheshti Tala managed to beat him 4-2 and claim the top medal.

Iranian newcomer and former junior world bronze medalist Rostami had an even closer bout against Ulvu GANIZADE (AZE) in the 72kg final.

Ganizade, who has silver medals from the age-group World Championships, led 8-8 and was set to win the final on criteria but Rostami managed to score a stepout late in the final and earned a 9-8 victory.

At 97kg, the battle was between three top wrestlers of this year's Asian championships. Uzur DZHUZUPBEKOV (KGZ) succeed to win the match against Asian champion Mehdi BALI (IRI) 7-3 in the semifinal but 38-year-old Rustam ASSAKALOV (UZB) ended his dreams of becoming a champion in Konya and claimed the first gold for Uzbekistan Greco-Roman team.

After exchanging passivity, Assakalov managed to get a turn from par terre and managed to hang on for a 3-1 win against Dzhuzupbekov and the gold medal.

Medet Kyzy, a 2021 World bronze medalist, outscored her opponents 40-0 in the four bouts en route to winning gold. In the final, the 23-year-old, who has won gold at U23 Worlds and Asians, earned an easy 10-0 win over Amy AYOUIN (CIV).

As the wrestlers in the weight class competed in a Nordic bracket, Yetgil had to beat Shokhida AKHMEDOVA (UZB) in Round 3 to claim the gold. She ended up pinning Akhmedova and let out an animated celebration in front of the home fans after capturing the title.

On Thursday, Buse TOSUN (TUR) won the gold at 72kg, the first of the Games for Turkey in wrestling.

At 65kg, Yelena SHALYGINA (KAZ) controlled her final against Elis MANOLOVA (AZE) to win the gold medal 3-3 on criteria.

Wrestling at the 5th Islamic Solidarity will continue Saturday, the final day, with five Greco-Roman and two women’s weight categories.