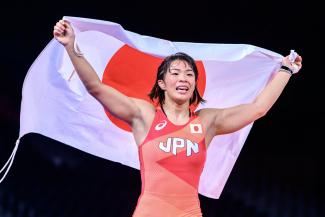 TOKYO (May 12)---Japanese star Risako KAWAI (JPN), who has not competed since winning a second straight Olympic title last summer in Tokyo, made a surprising announcement on Instagram that she had recently given birth to her first child.

The 27-year-old Kawai, a three-time world champion who won the Tokyo Olympic gold at 57kg, wrote that she had given birth to a girl on May 10. The baby's name and other details were not included.

Kawai expressed her gratitude to the doctors and medical staff who took her from pregnancy to childbirth and the many people who provided support, adding, "From now, everything I face will be an unknown to me, but I want to grow as a person along with my family."

Kawai's victory in Tokyo came a day after younger sister Yukako won the 62kg title, and the golden sister combination exponentially enhanced their national notoriety. The two became regular guests on talk shows and variety shows, milking the opportunity for all it was worth.

But neither has returned to competition since, and for Risako, the reason has become clear.

Just under a month after her Olympic triumph, Kawai announced on Aug. 27 that she had married Kiryu KINJO (JPN), a former wrestler with the Japan Self-Defense Forces. The two had been going together for five years, and she credited him with motivating her and helping her capture a second Olympic title.

The two are living in Fukui Prefecture, where Kinjo is now a teacher and wrestling coach at his alma mater of Tsuruga Kehi High School. They made no announcement of the pregnancy, and Kawai reportedly returned to her home in neighboring Ishikawa Prefecture to give birth, which is common in Japan.

Kawai, who won the 63kg gold at the 2016 Rio Olympics, had a tough road to winning again in Tokyo. By moving down to 57kg, it put her on a collision course with four-time Olympic champion Kaori ICHO (JPN).

The two went head-to-head four times during the qualifying process that drew world attention, with Kawai winning three times and eventually earning a place on Japan's team to the 2019 World Championships in Nur-Sultan, where she won her third straight world gold and clinched a berth at the Tokyo Olympics.

At a ceremony at the All-Japan Championships last December to honor Japan's Olympic medalists, Kawai expressed her intention to attempt to win a third Olympic title at the 2024 Paris Games.

"I will be 30 years old the year of the Paris [Olympics]," Kawai said at the time. "I'll probably have to put up with more injuries, so I will keep that in mind. I'm going to practice so I can be ready to come back any time. I want to set my goals while keeping tabs on my physical condition."

As expected, the recent birth has kept Kawai out of the upcoming All-Japan Invitational Championships in June, which in turn rules her out of this year's World Championships in Belgrade. Kawai's name was not on the list of entries released Friday by the Japan Wrestling Federation for the tournament, which is the second domestic qualifier for the worlds.

Sankei Sports, citing an unnamed source, reported that Kawai will aim for the All-Japan Championships in December, which will be the first step in the qualifying process for the Paris Olympics. That tournament will serve as the first qualifier for 2023 World Championships, where the first berths for Paris 2024 will be awarded.

The sports daily said that Kawai's mother Hatsue--a two-time national champion during her wrestling days--will help in taking care of the baby, freeing up time for Risako to train.

Unlike in the past, motherhood is no longer a barrier keeping a woman from continuing their career in sports. Among top wrestlers, four-time Olympic medalist Mariya STADNIK (AZE) has a boy and girl, and Tokyo bronze medalist Vanessa KALADZINSKAYA (BLR) has a son. Adeline GRAY (USA), who won a sixth world title last year in Oslo, is expecting twins.

The 5th Islamic Solidarity Games, originally scheduled to be held in 2021, were postponed by a year due to the COVID-19 pandemic. About 4200 athletes from 56 countries have arrived in Konya to compete in 19 different sports and four para-sports.

Wrestling got underway at the Games on Wednesday with five freestyle and two women's weight categories.

In freestyle, Iran and Azerbaijan grabbed two gold medals each on the first day while Uzbekistan succeed to take one gold.

However, it wasn't an easy run for him as he was in trouble in the quarterfinal against Tokyo Olympian Morteza GHIASI (IRI) but came from behind to win the match.

With less than 30 seconds to the end, Ghiasi led 4-1 but Aliyev hit a double and gut wrenches to earn an 8-4 victory. 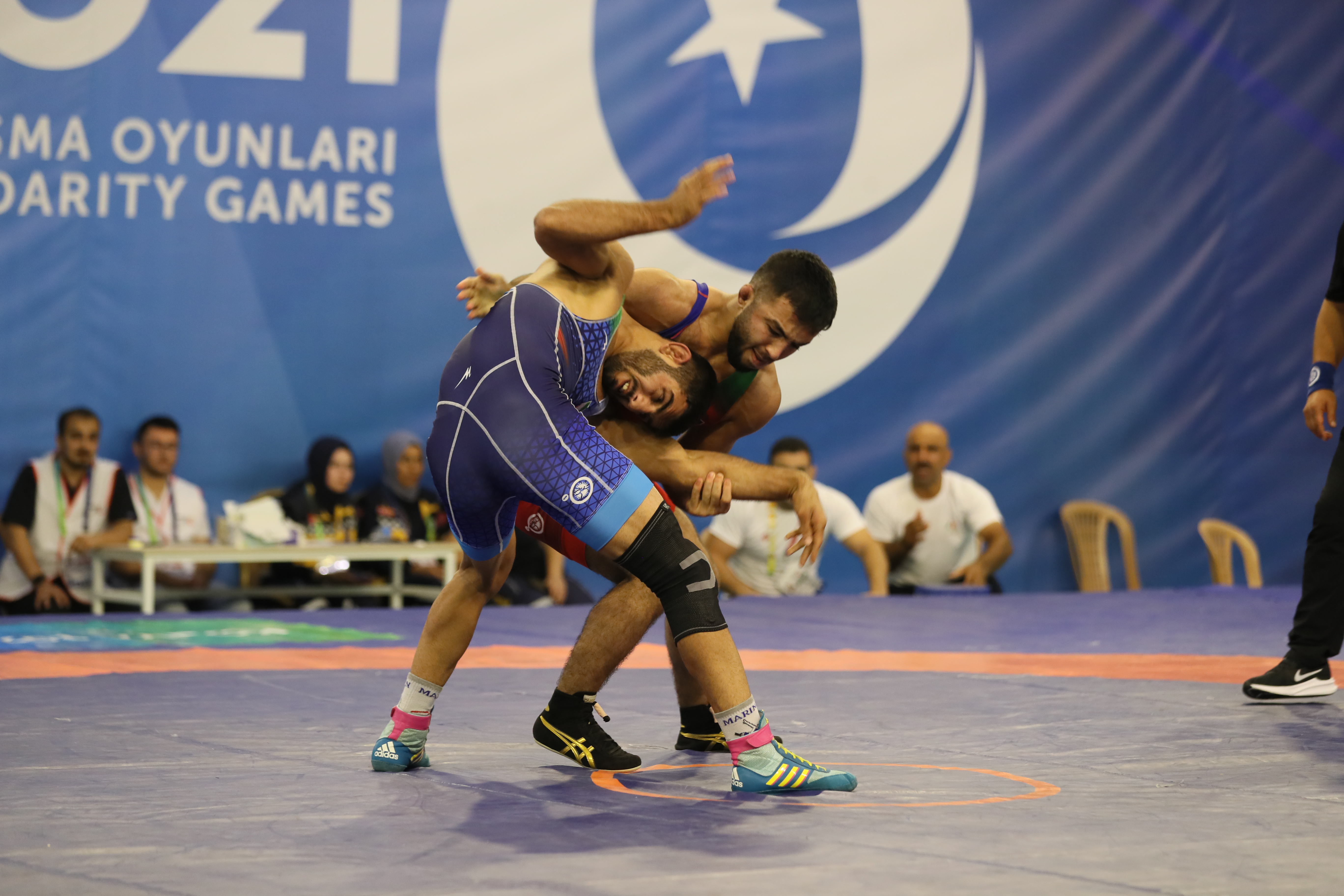 In another close Azerbaijan-Iran bout, Turan BAYRAMOV (AZE) earned the second gold for Azerbaijan by a 2-1 victory over Mohammadsadegh FIROUZPOUR (IRI) in the 74kg final.

Karimi controlled the bout by several takedowns and had a 9-0 lead when Abakarov signaled for a forfeit citing an injury. Karimi outscored his opponents 29-0 in the three bouts. 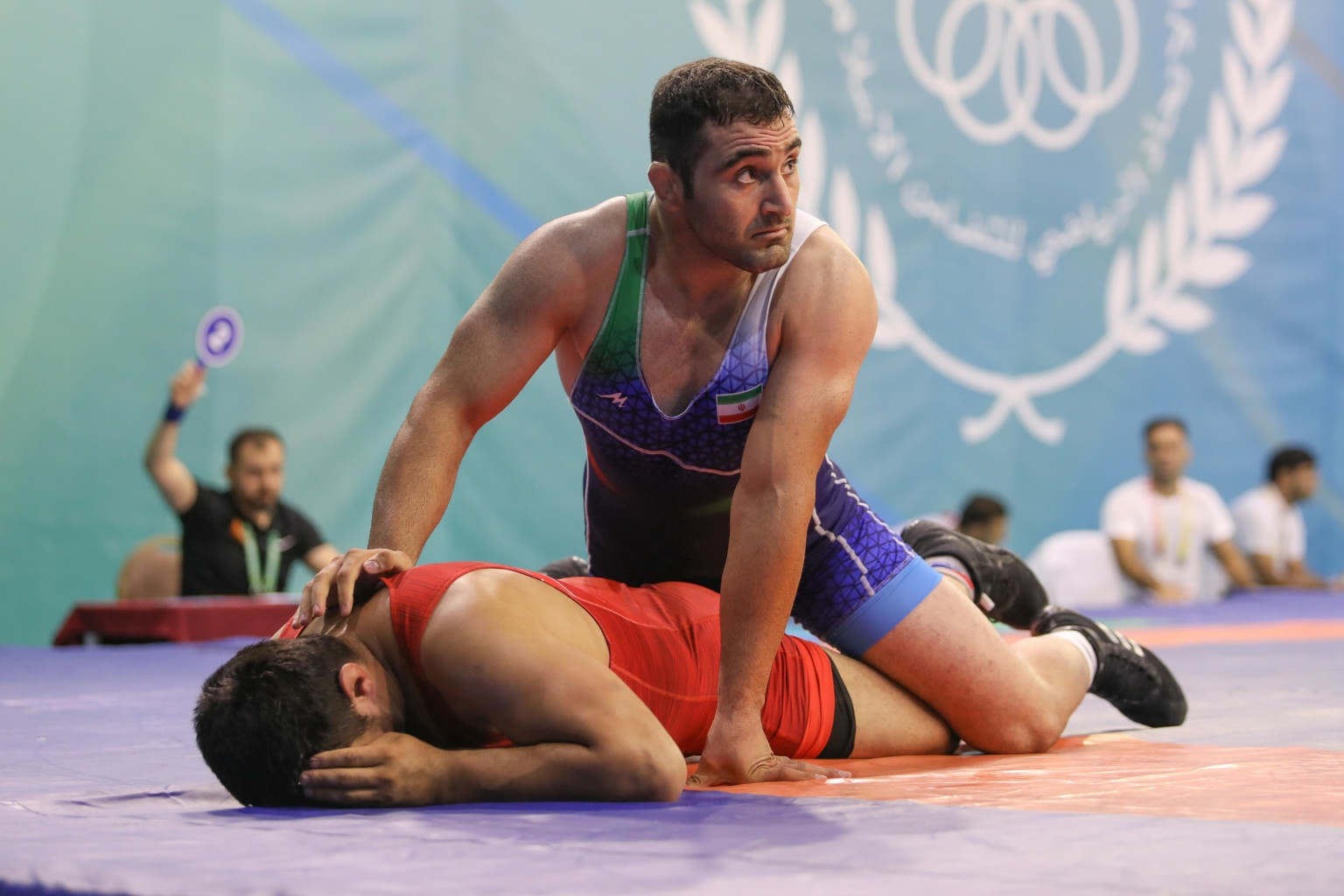 Goleij opened the bout with two points when the Turkey wrestler failed to continue further due to an injury.

Tokyo Olympian Muminjon ABDULLAEV (UZB) won the first gold of the night as he downed Almaz SMANBEKOV (KGZ) in the 57kg final bout to put the gold in Uzbekistan's pocket. 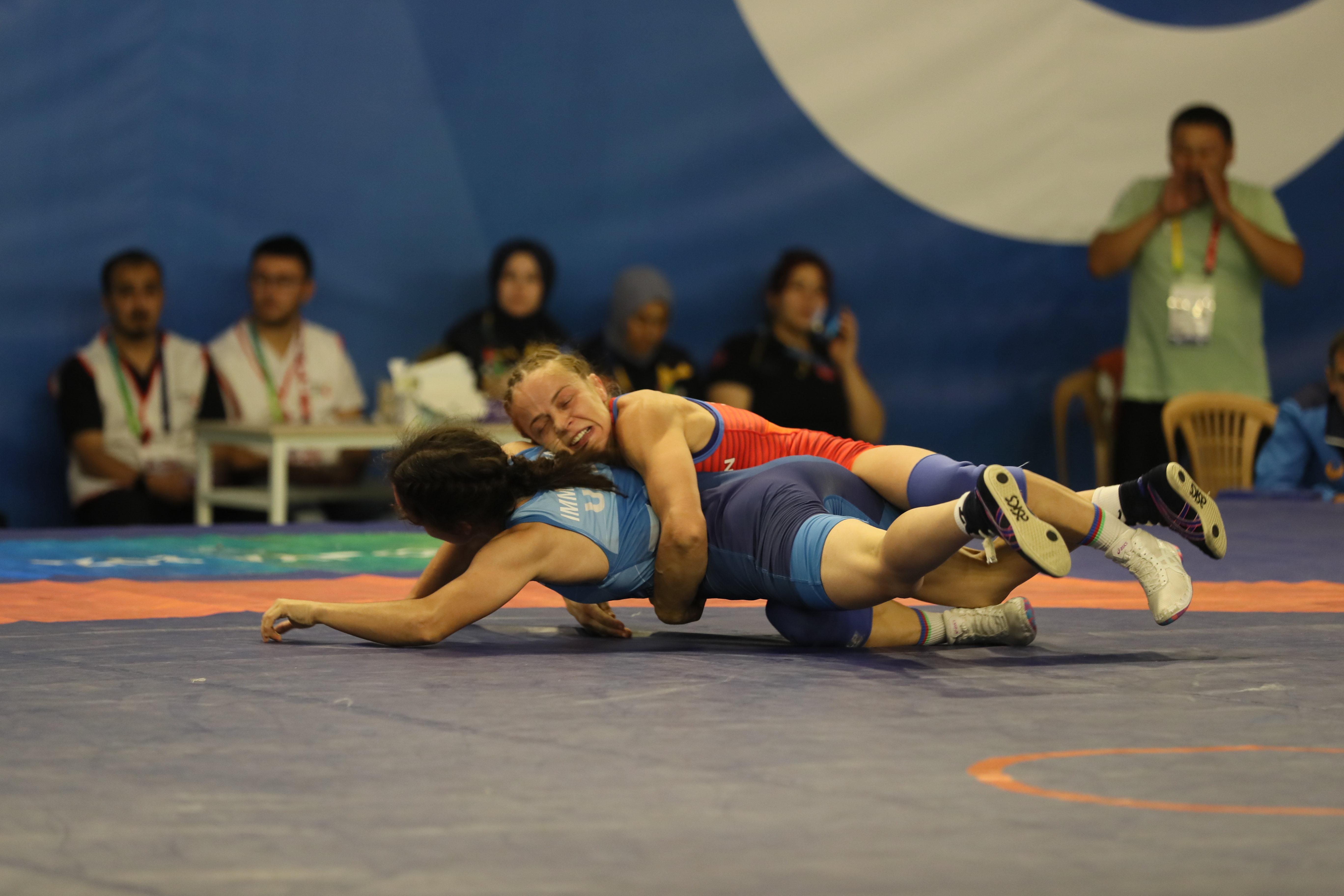 The two women’s wrestling weight classes in action on Wednesday were 50kg and 59kg.

10-time Olympic and World medalist Mariya Stadnik (AZE) made a return to competitive wrestling for the first time since Tokyo Olympics and it was golden.

The four-time Olympic medalist defended her gold medal from the 2017 Games with a brilliant performance.

Over the course of her four bouts, she had a 40-0 record and celebrated her title by a 10-0 victory over Jasmina IMMAEVA (UZB). 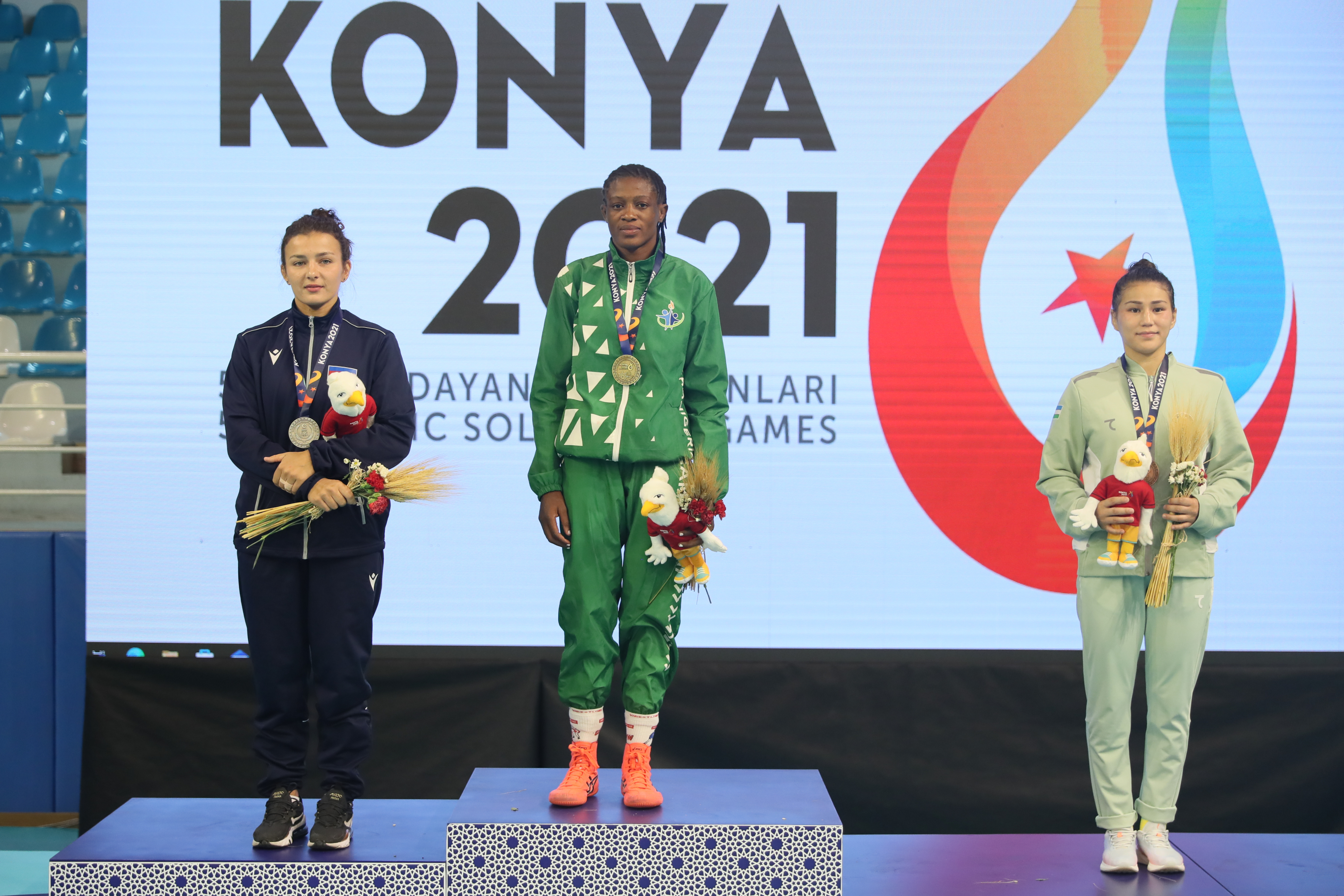 After winning gold less than a week ago at the Commonwealth Games in Birmingham, Odunayo ADEKUOROYE (NGR) became the third wrestler of the day who defended her title from the 2017 edition of the Games.

Wrestling at 59kg, three-time world medalist Adekuoroye earned 27 points against her four rivals. Since there were five wrestlers in the weight class, it was conducted in a Nordic bracket. 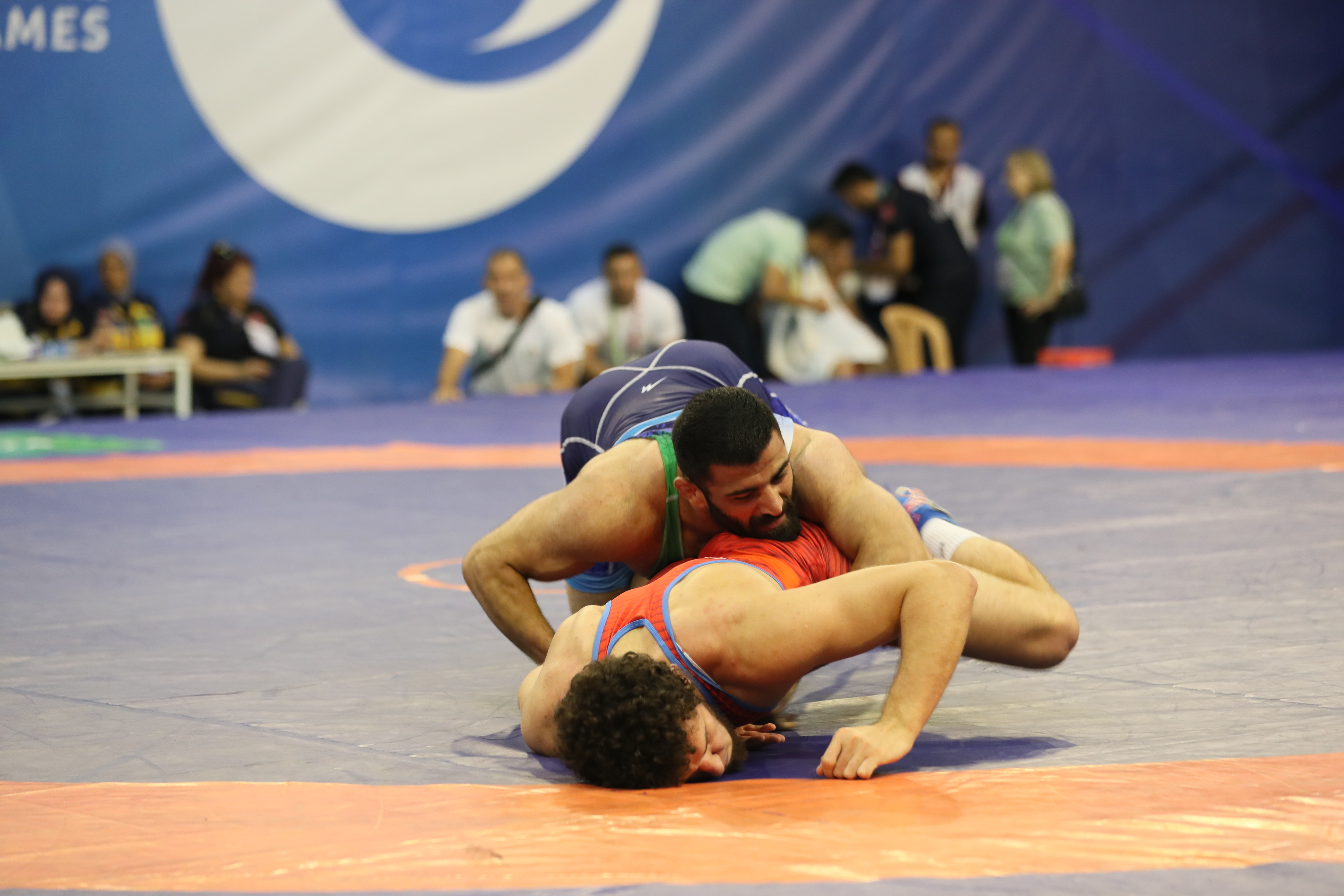