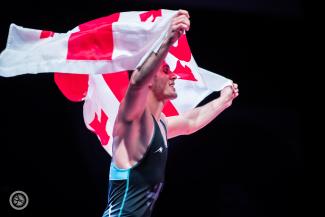 NOVI SAD, Serbia (March 6) – Georgia (178 points) wrapped up the Greco-Roman team title at the U23 European Championships, 11 points ahead of second-place Russia (167 points). They closed out the final day of Greco-Roman wrestling with a solo gold medalist and brought their tournament championship total to five.

Georgia’s second Day 3 finalist was Giorgi MELIA (GEO). Melia fell to Finland’s Arvi SAVOLAINEN, 4-1, in the 97kg gold-medal match. The Georgian led 1-1 on criteria but gave up a late takedown and a lost challenge dropping the match, 4-1. Although he didn’t leave as a titleholder, Melia’s silver medal still helped Georgia win the team title by claiming his 20-second place points.

Meanwhile, second-place Russia had a trio of Day 3 finalists but only walked away with a single champion.

Alen MIRZOIAN claimed Russia’s second overall gold of the tournament, blowing out the host nation’s Sebastian NAD, 10-0, in the opening period of the 67kg gold-medal bout.

Mirzoian grabbed the 1-0 lead with a passivity point, then quickly went to work in the par terre position. The Russian picked up two points from a leg foul and added a point from a failed Serbian challenge, which brought the score to 4-0. The returning U23 European champion closed out the match 10-0 with a four-point throw and a gut wrench for good measures.

In the 82kg finals, Zotlan LEVAI (HUN) trailed 1-1 on criteria before picking up the match's first takedown to steal the gold medal from Russia’s third finalist Vaag MARGARIAN, 3-1.

The final gold medal of the day went to Kerem KAMAL, who defeated Romania’s Razvan ARNAUT in the 60kg gold-medal bout and helped Turkey finished in third place in the team race.

In the finals, Kamal scored the first passivity points, but a Romanian reversal evened the match at 1-1. The Turkish wrestler scored a late period step out and regained the lead, 2-1, heading into the closing period.

Kamal started the second period with a pair of step outs, extending his lead to 4-1. Kamal stopped an arm throw attempt and wrapped up his second consecutive U23 European Championships with a gold medal, bringing his overall age-group European gold medal bout to five.

Georgia won the Greco-Roman team title with 178 points. Russia had 167 points and finished in second place. Turkey, Romania, and Ukraine rounded out the top-five respectively.

Russia Closes out U23 European C'ships with Freestyle Team Title 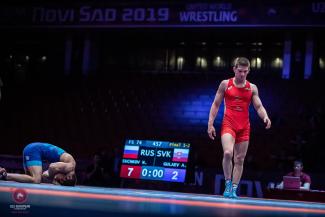 NOVI SAD, Serbia (March 10) – The Russian Federation won four gold medals on the final day of wrestling at the U23 European Championships and brought their freestyle championship total to six. Russia closed out the competition in Novi Sad, Serbia, 77 points ahead of second place Turkey.

Overall, Russia reached the finals in eight of ten freestyle weight classes and reached the top of the team podium thanks to their four Day 7 gold medal performances by Abasgadzhi MAGOMEDOV, Nikita SUCHKOV, Arsen-Ali MUSALALIEV, and Batyrbek TCAKULOV.

Nikita Suchkov claimed Russia’s second gold medal of the day with a win in the 74kg finals over Akhsarbek GULAEV (SVK).

Suchkov improved on his 2017 U23 European Championship finish of 17th place, cruising past Gulaev, 7-2. Sunday's loss made it the second year in a row that Gulaev lost to a Russian opponent in the U23 European finals. Last season, he fell short against eventual senior level world champion Zaurbek SIDAKOV in the U23 continental finals.

Arsen-Ali Musalaliev, the reigning U23 European champion, won Russia’s third consecutive gold medal of the day with a 6-1 victory over Turkey’s Arif OZEN (TUR) in the 86kg finals. Musalaliev successfully defended his U23 European title by scoring a pair of takedowns and a gut wrench, closing out the European Championships by outscoring his four continental opponents 32-3.

In the 92kg finals, last year’s U23 European bronze medalist Batyrbek Tcakulov collected four points from a takedown and a gut wrench and scored the 4-0 shutout win over Ukraine’s Vasyl SOVA, giving Russia their fourth and final gold medal of the day.