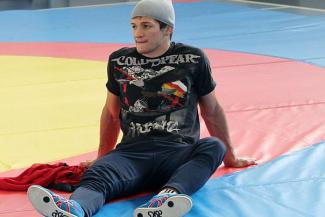 Nobody said that winning an Olympic gold medal in Greco-Roman wrestling would be easy.

Stepping onto the mat for his match in the Olympic finals, Russia's Alan Khugaev not only had to deal with the pressures of new fatherhood and the threat of blood trickling into his eye from a nasty cut on his eyebrow, he had to defeat one of the sports most celebrated champions. Karam Gaber, Khugaev's Egyptian opponent stood half a head taller than the Russian, and sported a physique that appeared to be chiseled from a rock face. Back in 2004, Gaber won a gold medal in Greco-Roman in the Athens Olympic in devastating fashion, tearing through the competition with almost unprecedented power and ferocity. In the past, Gaber had not just beaten opponents, he had tossed them around like children, and now he was back in the Olympic finals intent on reclaiming his former glory.

Though smaller in stature, and more modest in musculature, Khugaev competed against Gaber without the slightest hint of intimidation. He resisted all of the Egyptians throw attempts, and the two wrestlers stood toe to toe, deadlocked, neither able to gain an advantage. The match went to ordered holds so that the tie could be broken. Khugaev, through superior technique and crafty defense, bested his opponent through craftiness and technique, lifting Gaber off the mat and then resisting his opponent's lift attempts in kind. As the sport of wrestling so often shows, skill can always neutralize brawn, and in London, Khugaev used skill to defeat a titan and win a gold medal.

Khubaev had persevered through life's harshest pressures off the mat, triumphed over the toughest possible opponent's he could encounter on the mat and now he stood atop the world of Greco Roman wrestling as an Olympic champion. After so many near misses in some of the sport's greatest tournaments- a silver medal in the Junior World Championships, a silver medal in the European championships and a loss in the bronze-medal match of the 2011 Senior World Championship, he had finally obtained the prize he had sought since first training in wrestling as at 10 years of age.

Even in his youth, Khugaev showed the potential to become a great wrestler; as a young man, Khubaev's body possessed such stength and flexibility that coaches likened his physical build to that of a serpent. Like so many great wrestlers, his father, Anatoli, was a wrestling coach, but while his father's occupation might have made Khugeaev's entry into the sport inevitable, his choice of wrestling style proved to be a bit of a curiosity.

Khugaev hails from Vladikavkaz in the Russian republic of North Ossetia-Alania. Vladikavkaz, without a doubt, is one of the world's premier wrestling hot spots, and many world and Olympic champions claim the city as their home. Most of these champions compete in freestyle wrestling, and Ossetian champions in Greco-Roman, such as Khugaev, are considerable less common. Nevertheless, through the influence of a family friend, Khugaev adopted Greco-Roman as his style of choice. Eventually he entered the tutelage of renowned coach Vladimir Uruymagov, and moved to Moscow to pursue his dream of becoming the best in the world.

Before winning any world-level titles, however, Khugaev would have to beat Russia's very best just to earn a place on his own national team. This would prove to be no easy task. Russia boasted world champion Alexej Mishin at Khugaev's weight. For seven years, from 2004-2011, Mishin dominated domestic competition, not losing a single match to a Russian opponent. This changed in 2011 when Khugaev announced his ascendancy by defeating Mishin at the Ivan Poddubny Grand Prix.  Khugaev would cement his place as the best Russian wrestler at his weight, and confirm his status as on Olympian with a Russian National Championship in 2012.

Khugaev's tale is still being told. At a mere 24 years of age, he potentially has many years of success in front of him. He continues his wrestling career, balancing time training with time spent with his wife, Fatima, and daughter, Aida. When not training or competing, he fosters a keen interest in cinema and frequents movie theaters. Wrestling, however, remains his true passion, and he continues to excel. Since his victory in the Olympics, he has also captured a University world title, and almost certainly his eyes now turn to the Rio de Janeiro Olympics in 2016 and the allure of another gold medal to add to his growing collection.

This is the first profile of an 18-part series to introduce wrestling fans to their 2012 Olympic champions before the 2014 season gets underway. Check back every Tuesday for more information on our sport’s newest Olympic champions.