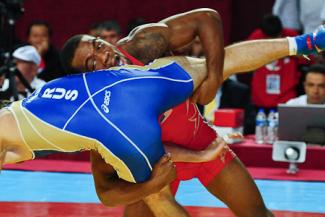 In a sport of champion wrestlers loved by their countrymen, Jordan Burroughs has transcended national loyalties to become one of the sport’s true champions..

In the last three years, Burroughs put on a 69 match win streak, took home two World Championships and secured an Olympic gold medal. During his reign of dominance, the New Jersey native has employed a rare blend of world-class technique, savvy tactics and a signature double-leg takedown that he’s used time and again to beat world-class opponents.

No wrestler grows without the nurturing and direction of a coach and for Burroughs that influence was University of Nebraska head wrestling coach Mark Manning. Burroughs joined Manning’s program at Nebraska in 2006, and the coach quickly recognized the vast well of potential contained within the then 18 year-old wrestler.

“Coach Manning told me after I got to Nebraska that if I did what he told me, I had what it took to become a world and Olympic champ,” Burroughs says. “I thought to myself, ‘I’m going to buy into what this guy is saying, I’m going to do what he asks me.’”

After doing what Manning has asked for the better part of a decade, Burroughs is now the biggest wrestling star the United States and arguably the world. His sculpted figure now graces countless posters on the walls of wrestling rooms throughout the USA and he’s referred to in Iran as a “Palawan” a title of endearment and respect by Iranian fans.

Though it’s tough to imagine, Burroughs has not always had an impressive physique, wrestled so well or been as well known to fans.

When Burroughs first found his way to Nebraska, he arrived undersized and with unpolished wrestling skills. Most wrestling fans don’t remember that version of Burroughs – the one that toiled in obscurity -- but Manning remembers him well.

“His development included huge physical gains,” says Manning. “Coming into our program as a 141lber and leaving 165lber in 2011. But, he grew in mindset and insight as well. I saw it day by day, week by week, and year by year -- he transformed from a good college wrestler into a great college wrestler.”

Burroughs improved at an amazing rate, transforming not just into a great college wrestler, but the best in the entire nation. He went undefeated during the 2009 and 2011 college wrestling seasons, winning two NCAA Division I National Championships. After the 2011 season he received the Hodge Trophy, the highest honor in American college wrestling, awarded to the best college wrestler in the nation regardless of weight.

Even though Burroughs grew so fast and achieved so much, his upward climb through the wrestling world did not always go smoothly.

“Jordan and I have been together over eight years,” recalls Manning. “So I remember when he struggled and grew as a young man in our program.”

One of these struggles occurred in 2008 at the Junior World Championships. Burroughs represented the United States at 66 kg in his first taste at international competition. Things started well for the American, and he won his first two matches of the tournament. Soon after that, however, his bid for a Junior World Championship ended as Hungary’s Sandor Toezser defeated him in the third round, a loss which would eliminate Burroughs.

The loss to Toezser hurt Burroughs deeply, but it would also play a huge role in his eventual success. The Olympic gold medalist points to the experience as the time when everything changed for him.  After his   devastation in 2008, Burroughs committed himself to standing on the podium after every single wrestling tournament he entered.

“I remember the exact moment that was turning point for me, it was after that match in 2008,” Burroughs explained. “ I went into the locker room crying and bawling, and made a promise to myself that I would never fell this way again, that I would earn a medal at time out. After that I changed my entire work ethic so that I would never fail to place at another tournament.”

Burroughs has not only placed at every tournament he entered after that, he has only failed to earn gold at a single one: the 2014 Yasar Dogu Grand Prix in Turkey, where he won bronze. Between his loss at the 2008 Junior World Championships and February of this year, Burroughs did not lose a single match. Always standing matside during his amazing run, spectators would find Burroughs’s faithful mentor Manning, who, despite never winning international wrestling titles himself, possesses world- class insight into what it takes to succeed at this highest levels of the sport.

“I am thankful that I have learned from others in my coaching and competitive career,” Manning remarked. “People from whom I can pass knowledge and expertise on to him.”

Manning has passed much more than wrestling expertise on to his charge, Burroughs credits the coach with making him a better all-around person. During the course of their eight-year relationship, he has moved past just viewing Manning as just someone who teaches a sport, but as something more akin to a parent.

“Mark Manning is awesome,” says Burroughs. “He is definitely a father-figure, a father away from home. He not only makes me a successful wrestler but a respectable man. Even though I’m successful he keeps me humble. He keeps me grounded.”

Staying grounded is significant when discussing a wrestler who has experienced the success of Burroughs. Over the next four years, Burroughs wants to win gold medals at the three more World Championships and the 2016 Olympics, breaking John Smith’s American record of five world-level titles in a row, and making himself the undisputed greatest wrestler in the history of the United States.

Whether or not Jordan Burroughs accomplishes this lofty goal remains uncertain, but without a doubt his coach Mark Manning will be with him every step of the way.