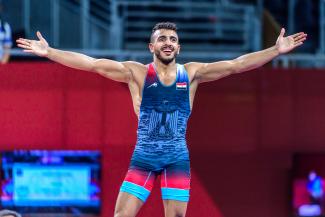 ORAN, Algeria (June 16) -- The XIX Mediterranean Games are scheduled to be held in Oran, Algeria from June 26 to 29 and will see a number of stars in the action next week.

Not only the Games will see some of the biggest names of the sport, but it will also mark the Ranking Series points being at any Games for the second time after the South-East Asian Games last month.

United World Wrestling's decision to include the Mediterranean Games, which struggled to get wrestlers to compete in the Games, in the ranking system has received a tremendous response which resulted in nearly twice as many athletes registering for this edition as the previous ones. This year's edition received entries from countries like Turkey, France, Portugal, Spain, Slovenia, Algeria, Morocco, San Marino, North Macedonia and Albania.

Olympic bronze medalist Yasemin ADAR (TUR) will be leading the women's wrestling field while the Games will also mark the return of Mohamed EL SAYED (EGY), who won a bronze medal in the 67kg weight class at the Tokyo Olympics. History maker for San Marino with a bronze medal in Tokyo and European champion, Myles AMINE (SMR) is entered at 86kg.

Earlier this year, United World Wrestling had added the Games before the September World Championships as part of the Ranking Series.

Across 17 Olympic weight classes, a total of 145 wrestlers will be competing at the EMEC Hall over the four days beginning June 26. 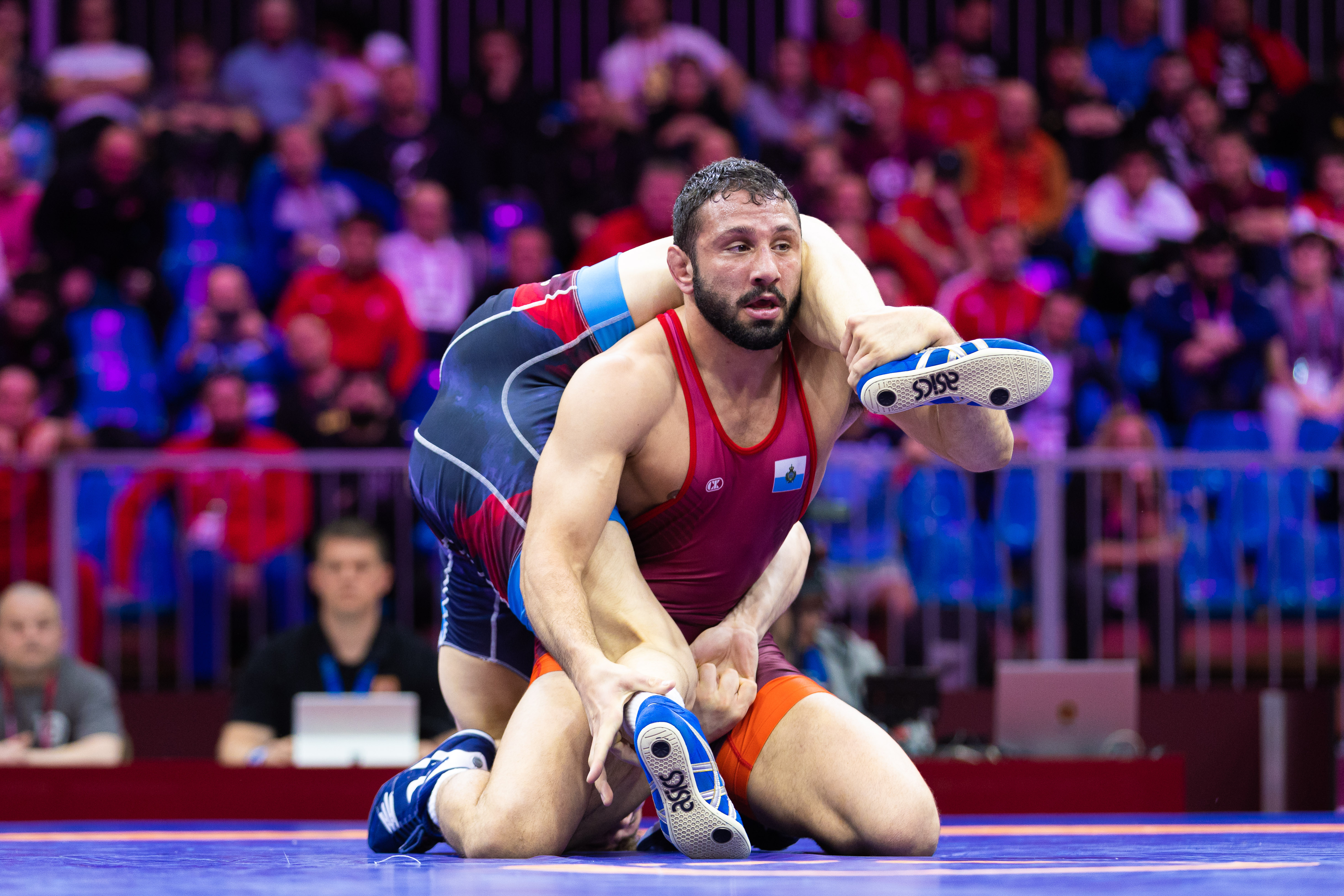 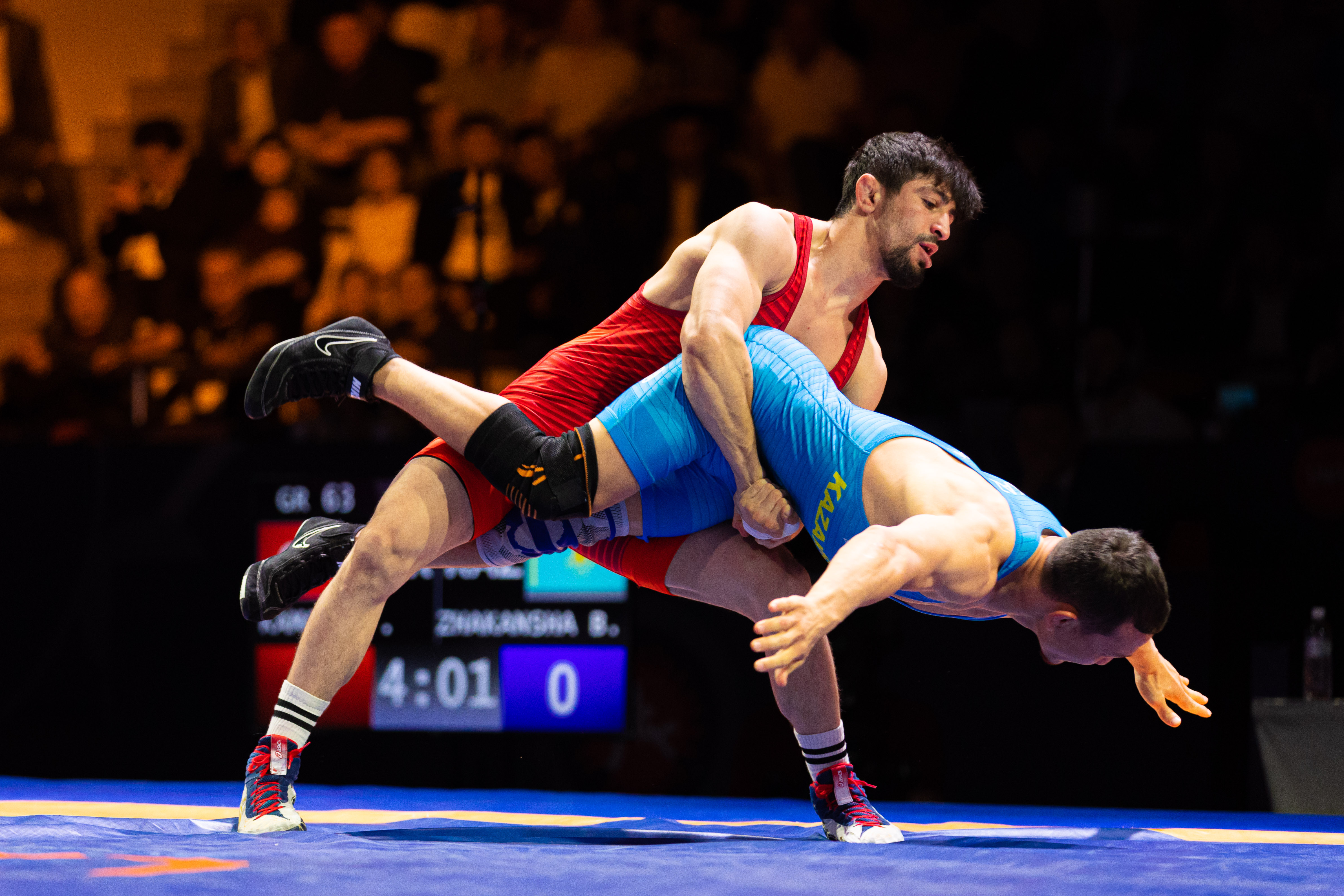 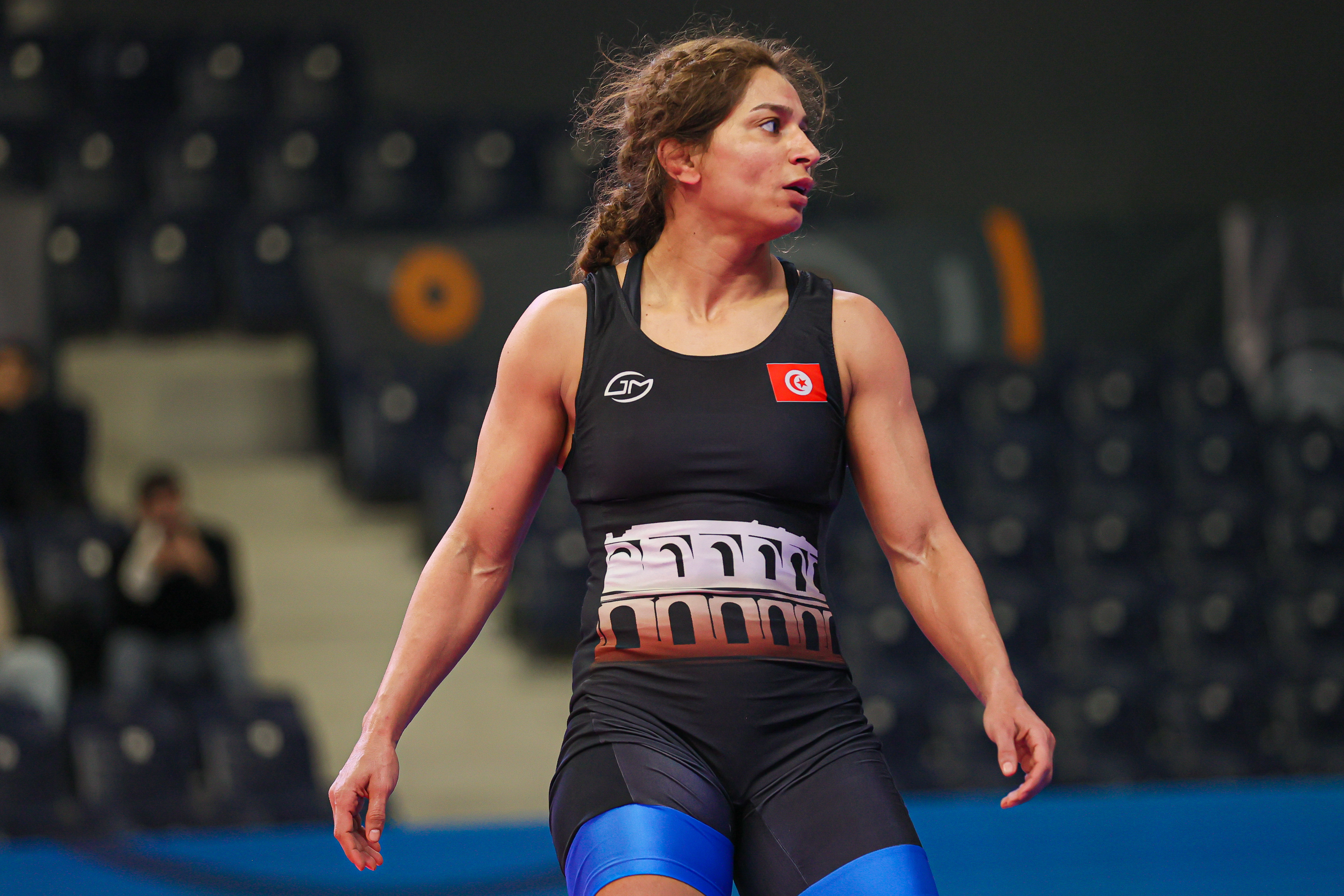 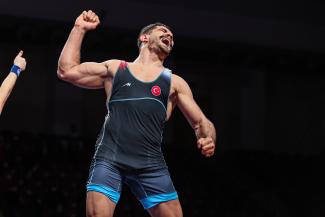 ISTANBUL, Turkey (March 1) -- The first Ranking Series event on the calendar is in the rearview, and after the event, several wrestlers have improved their rankings, which will ultimately be used for the seedings at the 2022 Continental and World Championships.

This year, UWW will award points according to the new ranking system.

The top eight wrestlers who acquired the most points from the four Ranking Series events and the Continental Championships will earn a seed for September's World Championships, held in Belgrade, Serbia.

As of now, wrestlers who competed and subsequently earned points from the Tokyo Olympic Games and Oslo World Championships fill out the top-20 in the rankings heading into Istanbul.

55kg
There were no changes in the top-10 but gold medalist Adem UZUN (TUR) debuts at No.11 with 8000 points, while silver medalist Amangali BEKBOLATOV (KAZ) enters the rankings at No. 13 with 6400 points.

63kg
Taleh MAMMADOV (AZE) moved up one sport after Istanbul. He went from being sixth to fifth after winning a bronze medal. He earned 5200 points, which moved him from 25000 points to 30200 points.

Gold medalist Islomjon BAKHRAMOV (UZB) entered the rankings at No.13 with 8000 points.

72kg
Kristupas SLEIVA (LTU) was ranked third with 31000 points. He moved to the second spot ahead of Sergei KUTUZOV (RWF) with a 9400-point silver-medal finish.

Ulvu GANIZADE (AZE) moved from eighth to seventh with a 10th-place finish. He's earned 5480 points, enough to take him past Valentin PETIC (MDA).

Mikko PELTOKANGAS (FIN) moved into the top-10 from 12th with a fifth-place finish. He received 7000 points for his finish, bringing his tally to 15200 points.

77kg
World silver medalist Sanan SULEYMANOV (AZE) moved to the third spot after his silver medal in Istanbul. He had 37000 points but added 9400 points, bringing his overall total to 46400 points.

Viktor NEMES (SRB) broke into the top-10 after his fifth-place finish. He was ranked 12th previously but received 7000 points.

82kg
Rafig HUSEYNOV (AZE) and Burhan AKBUDAK (TUR) are ranked first and second, respectively. The two met in the semifinals in Istanbul, with Akbudak winning the 8000-point gold, while Huseynov picked up 5200 points for bronze. The Azerbaijan wrestler remains first with 50200 points, while Akbudak is second with 45000 points.

87kg
World champion Zurabi DATUNASHVILI (SRB) improved his points tally from 79200 points to 85600 points with a silver medal. Arkadiusz KULYNYCZ (POL) was ranked seventh [31000 points] but is now sixth after finishing seventh and getting 3520 points.

97kg
Young star and Tokyo fifth-place finisher Arvi SAVOLAINEN (FIN) made a big jump from 12th to sixth place with a silver medal. He scored 11400 points and moved from 23000 points to now 34400 points.

130kg
Riza KAYAALP (TUR) reached the fifth spot from seventh after he won a bronze medal. He had 34200 points, and the additional 8200-point bronze gave him 42200 points.

Osman YILDIRIM (TUR) also moved two spots from ninth to seventh after the gold win and 11000 points. He now has 36000 points to his name.

Silver medalist and Kayaalp-slayer Beka KANDELAKI (AZE) entered top-10 at the No. 10 position with his silver medal. He had 17000 points but now has 26400 points.

57kg
World bronze medalist Horst LEHR (GER) missed out on earning a medal but still picked up 5100 points for finishing 12th in a bracket that had more than 16 participants. That helped him jump from his seventh position to fifth.

61kg
Ulukbek ZHOLDOSHBEKOV (KGZ) jumped seven places to break into the top-10 at 61kg. The former U23 world champion won a bronze medal and collected 10200 points. He was ranked 16th before the Yasar Dogu with 5400 points, but ended with 15600 points and is now ninth in the rankings.

Gold medalist Ravi KUMAR (IND), who is competing up a weight from his Tokoyo silver-medal winning weight of 57kg, added 13000 points and jumped up into the 12th spot.

65kg
World champion Zagir SHAKHIEV (RWF) is the new number-one ranked wrestler at 65kg. He won a silver medal in Istanbul and overtook the top spot from Olympic champion Takuto OTOGURO (JPN). He now has 56400 points as he added 11400 for his silver.

Otoguro [51000 points] has now slipped to third as Tulga TUMUR OCHIR (MGL) improved to second with a fifth-place finish. He entered the competition with 44500 points but now has 53500 points after the additional 9000 points.

Rohit ROHIT (IND) improved his ranking by one place. He grabbed 8200 points for his eighth-place finish and sit No. 8. Morteza GHIASI CHEKA (IRI) also moved from 16th to 13th with a 12th-placed finish and 5100 points.

Silver medalist James GREEN (USA) improved from seventh to fifth after leaving Istanbul with 11400 points. He now has 29600 points.

Viktor RASSADIN (RWF) won bronze and has entered the rankings at 12th with 10200 points.

The two fifth-placed wrestlers -- Levan KELEKHSASHVILI (GEO) and Aliakbar FAZLIKHALILI (IRI) -- debut at 14th and 15th with 9000 points each. Since the Georgian had more classification points than Fazlikhalili in the tournament, he is ranked above the Iranian.

74kg
Fazli ERYILMAZ (TUR) broke into the top-three with a silver-medal finish in Istanbul. He was awarded 11400 points, enough to take him from the previous eighth position to third. He now has 42400 points.

92kg
Ahmad BAZRIGHALEH (IRI) and Erhan YAYLACI (TUR) were the two wrestlers who improved their ranking at 92kg. Bazrighaleh debuts in this month's rankings with 11000 points for his gold medal in Istanbul.

97kg
Gold medalist at 97kg Mohammad MOHAMMADIAN (IRI) made a marginal jump of three spots from 17th to 14th despite getting 11000 points for the win. He now has 16400 points.

125kg
Taha AKGUL (TUR) and Lkhagvagerel MUNKHTUR (MGL) won the gold and silver, respectively, giving them 13000 and 11400 points. They remained third and fourth in the rankings.

The Turkish wrestler now has 78200 points but is still behind number two Geno PETRIASHVILI (GEO) who has 78400 points. Munkhtar now has 65400 points but no change in the rank.

Bronze medalist Yusup BATIRMURZAEV (KAZ) made a big jump from 22nd rank to 12th as he collected 10200 points. He had 6200 points but now has 16400 points to be placed 12th. Oleg BOLTIN (KAZ) improved from seventh to sixth with 8520 points for his eighth-place finish in Istanbul.

Gennadij CUDINOVIC (GER, who was previously ranked 13th,  jumped to eighth. He started with 23200 points and was awarded 8200 points for finishing eighth in the competition.

Miglena SELISHKA (BUL) [31700 points] had a chance to be fourth but she missed out on winning gold. She received 10200 points for her bronze and is now fifth with 41900 points.

It was a similar case for Otgonjargal DOLGORJAV (MGL) [31000 points] and Nadezhda SOKOLOVA (RWF) [31000 points]. They remain seventh and eighth, respectively, despite winning bronze and finishing eighth.

53kg
Olympic bronze medalist Bolortuya BAT OCHIR (MGL) managed to topple Mayu MUKAIDA (JPN) from the weight's No. 1 by winning the gold in Istanbul. She had 43200 points but an additional 13000 points brought her total to 56200, enough to move past Mukaida's 51000 points.

Junior world champion Emma MALMGREN (SWE) moved from 15th to 11th thanks to her ninth-place finish and 7800 points. Annika WENDLE (GER) moved from 17th to 12th as she finished seventh and got 8520 points.

55kg
Mehlika OZTURK (TUR) moved from tenth to seventh after collecting 8520 points for her eighth-place, while gold medalist Jacarra WINCHESTER (USA) is 11th with 11000 points.

57kg
Olympic bronze medalist Evelina NIKOLOVA (BUL) added 13000 points for her gold medal and consolidated her second position in the rankings. She now has 64200 points. Tokyo silver medalist Iryna KURACHKINA (BLR) was fifth with 41400 points but is now third after her 10200-point bronze.

Veronika CHUMIKOVA (RWF) moved from eighth to sixth after winning a bronze medal and 10200 points. She now has a total of 35200 points.

59kg
Alyona KOLESNIK (AZE), previously ranked tenth, moved to seventh with a bronze medal. She had 14300 points before the tournament but now has 22500 points.

Jowita WRZESIEN (POL) broke into the top-10 with a bronze medal and 8200 points. She is now ranked tenth from her earlier 12th as she now has 16400 points.

62kg
Taybe YUSEIN (BUL), who had 34200 points, jumped to the third-ranking after she collected 9000 points. She now has 43200 points, the same as fourth-ranked Kayla MIRACLE (USA), but is ranked third because the USA wrestler is yet to participate in a Ranking Series event this year.

Lais NUNES DE OLIVEIRA (BRA) was ranked eighth-ranked with 29600 points but is now fifth with 37400 points as she finished ninth and collected 7800 points.

Dinara KUDAEVA SALIKHOVA (RWF) moved from tenth to seventh as she earned 5050 points for her 14th place finish. She now has 19350 points.

68kg
Meerim ZHUMANAZAROVA (KGZ) is now the top-ranked wrestler at 68kg. Despite winning the silver in Istanbul, the 6400 points were enough to take her tally to 83600 points, 3600 points more than Tamyra MENSAH STOCK (USA), who has 80000 points.

72kg
Zhamila BAKBERGENOVA (KAZ) won the gold for 8000 points, tying her with top-ranked Masako FURUICHI (JPN). But as Furuichi finished with gold at the World Championships and Bakbergenova silver, the Kazak wrestler remains second.

World bronze medalist Anna SCHELL (GER) retained her third place with a silver medal, while Buse CAVUSOGLU TOSUN (TUR) fumbled her shot at jumping to No. 3 in the rankings after she finished fifth on home soil.

Kseniia BURAKOVA (RWF) moved from 13th to 11th with 4000 points for her fifth-place finish.

World bronze medalist Samar HAMZA (EGY) had 43300 points and needed to finish ninth or better to overtake Olympic champion Aline FOCKEN (GER) for the fourth spot. She finished ninth and took home 7800 points, moving past Focken for the fourth rank.