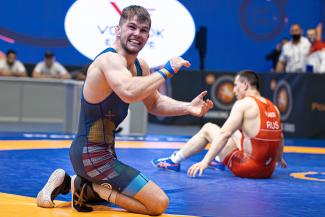 WARSAW, Poland (June 12) --- “The smallest,” Roman VLASOV (RUS) did not mince his words when asked about his chances to make the Russian team for the Tokyo Olympics.

He was the favorite to win the 77kg weight class in Warsaw on Saturday but the Russian suffered a shock defeat to the rising star Tamas LEVAI (HUN) in the semifinal 1-1, hurting his own chances of making the Russian team for the Games.

It was one of those matches where Vlasov failed to find his rhythm despite being the aggressive wrestler. He did not anticipate the tactics Levai deployed first to come out unharmed from the par terre position and then defend the 1-1 criteria lead until the end of time.

The two-time Olympic champion's fate now hangs in balance as Russia will decide the the Tokyo Olympian later this month. 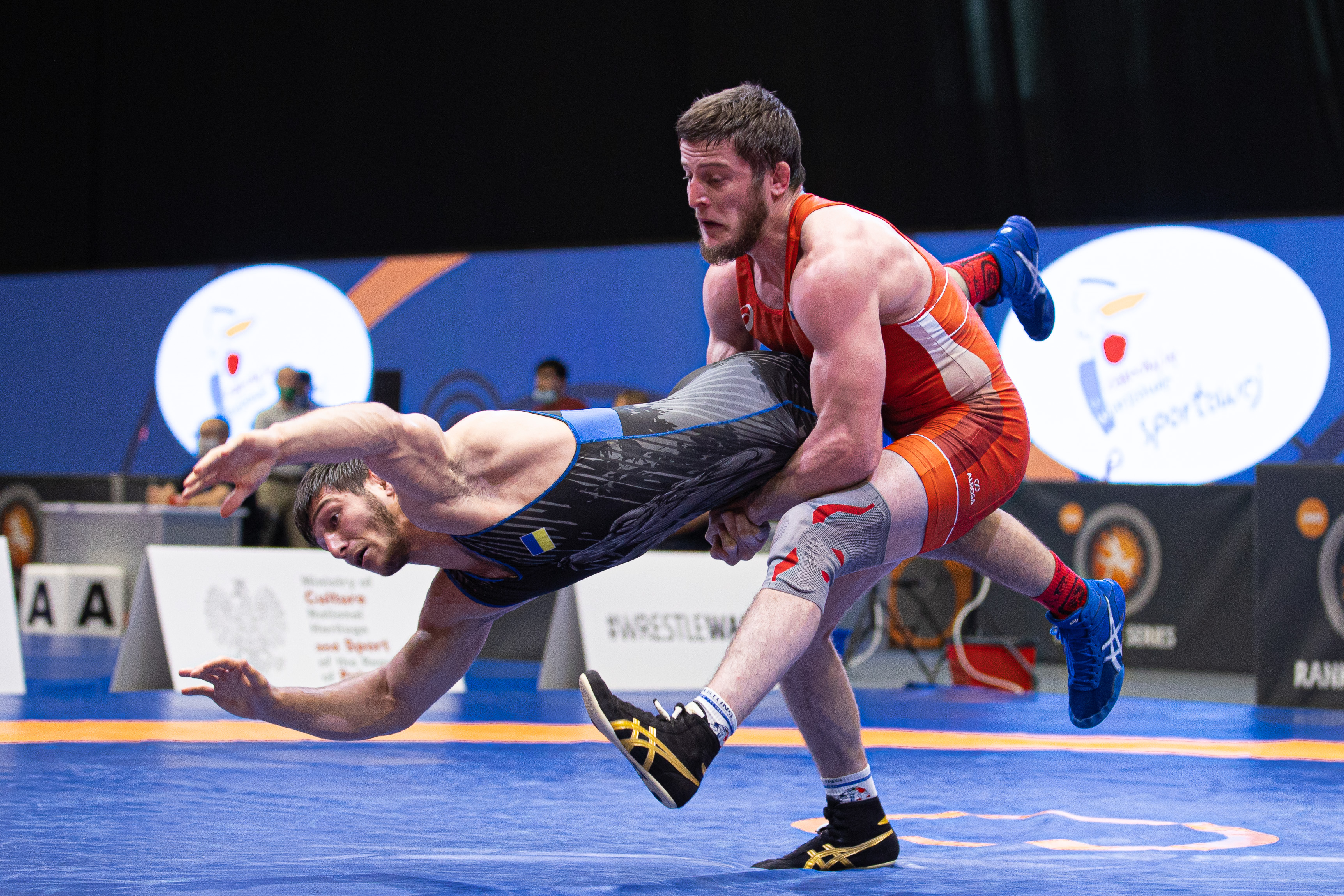 In the 77kg final, Abuiazid MANTSIGOV (RUS) manhandled Levai -- outplacing Vlasov in the process -- and will likely square off against fellow world champion Aleksander CHEKHIRKIN (RUS) for the Russian 77kg at the Tokyo Olympic Games.

It’s not clear when or where the special wrestle-off will take place, but once that information is available, it’ll be posted on www.uww.org and all of our social media accounts.

However, Iran got their Olympian at 130kg. In the all-Iranian battle for the gold and a place on the team for Tokyo, Amin MIRZAZADEH (IRI) used a mean underhook throw-by with 45 seconds left in the second period to pick up the match's only offensive points against Aliakbar YOUSOFIAHMADCHALI (IRI). That was the match-deciding takedown, as Mirzazadeh claimed gold with the 3-1 victory. 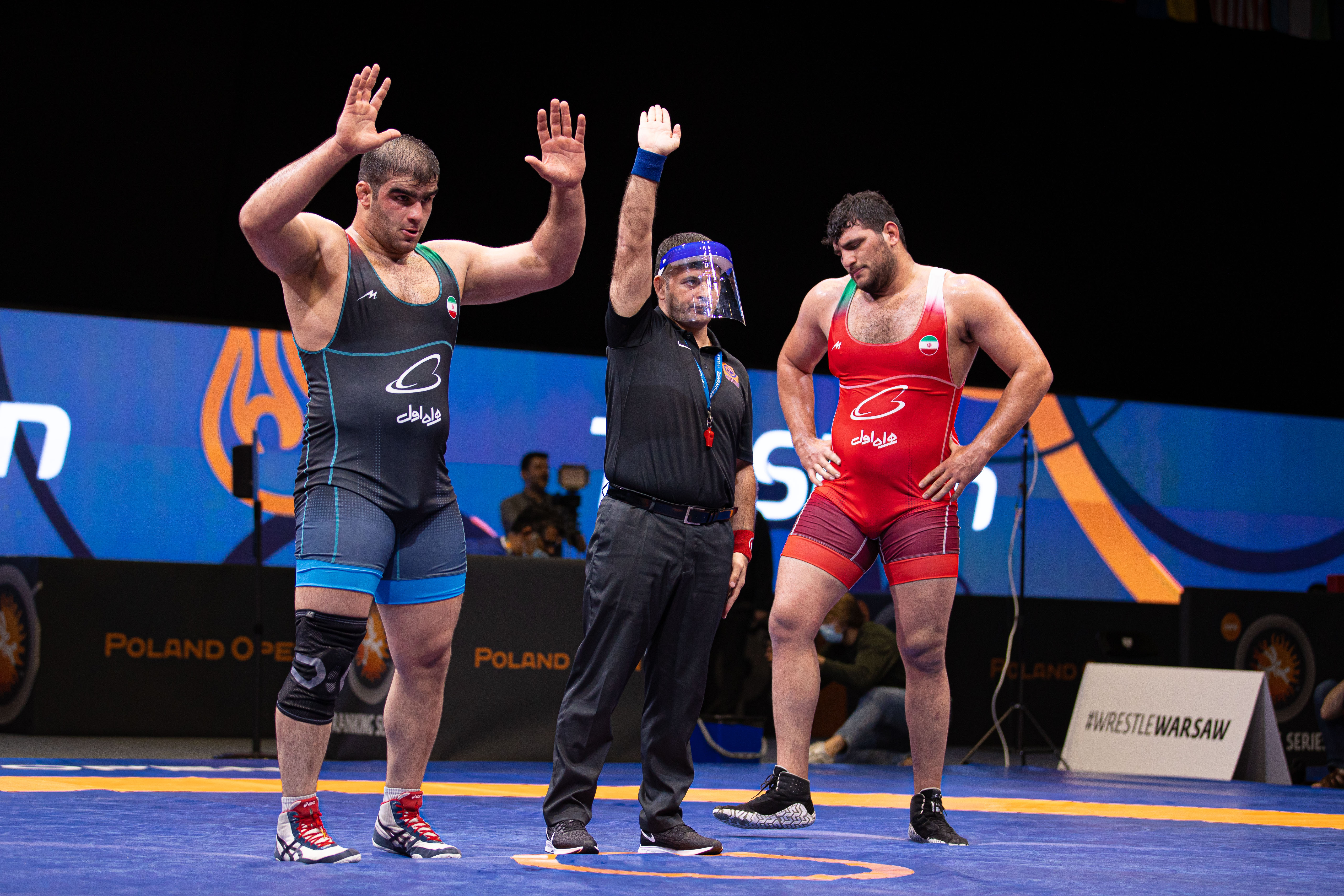 There was a third Iranian -- Amir GHASEMIMONJEZI (IRI) -- part of the process but Muminjon ABDULLAEV (UZB) defeated him 8-0 in the quarterfinal to end his run for the Olympics.

Abdullaev finished with the bronze medal and will receive 12 points, breaking into the top four seedings for the Olympics. His 12 points made his jump over Moises Salvador PEREZ HELLBURG (VEN) and sit fourth with 40 points.

At 67kg, Murat FIRAT (TUR) forged a five-point second-period comeback and stopped Mohamed ELSAYED (EGY) from putting a third Ranking Series gold on his resume. The 24-year-old Turk surrendered an inactivity point and a right-sided two-point gut wrench against the Tokyo Olympian, but conserved enough energy to string together five unanswered points and steal the match from the Egyptian.

Firat’s point-scoring frenzy started with a pair of step-outs, followed by a two-point exposure that results from an inactivity point.

What the silver medal does is take Elsayed to second place in the Tokyo seeds at 67kg as he collected 12 points for his silver medal. His total of 50 points keeps him behind Ismael BORRERO MOLINA (CUB) who has 80 points but he moves ahead of Artem SURKOV (RUS) and Mate NEMES (SRB) who have 40 points and 39 points respectively.

Elsayed said he missed competing internationally and due to lack of training due to COVID-19, he was not 100 percent on Saturday. But the U23 world champion was confident of being in best shape for the Olympics.

The youngsters' win here doesn't give any ranking points for the Tokyo Olympics as he will be moving down to 77kg at the Olympics.

At 55kg, Max NOWRY (USA) was awarded the gold medal as he was the only entry in the weight class.

Greco-Roman wrestling will continue on Sunday with five more weight categories in action in Warsaw.