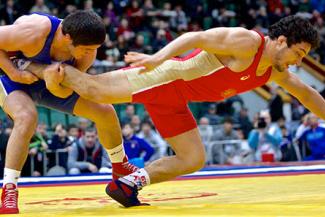 With a shortened Sunday schedule, the third and final day of the Ivan Yariguin provided fans with a brief, but dramatic day of wrestling.

After qualification rounds filled with crowd-pleasing throws, the finals got started off right at 86 kg with Russians Abdulrashid Sadulayev defeating 2013 world team member Shamil Kudiyamagomedov, 14-7. Sadulayev trailed 2-0 heading into the second period, but Sadulayev founght bak and found a four point takedown and gut wrench to make the score 6-2. After some back and forth the score tied 7-7 with a minute left on the clock. Sadulayev scored a takedown on the edge, making the score, 9-7. The Dagestani wrestler finished the match with a chest lock from his feet that was scored for four points.

At 97kg, 2012 Olympian Abdusalam Gadisov of Russia put on a workman-like performance against Belarus’ Ivan Yankovski. The Dagestani wrestler used a series of snaps and short arm passes to score four takedowns and take home the coveted Yariguin championship.

The final matches of the tournament belonged to the 125 kg grapplers from Russia. Defending Russian National champion Alan Khugaev faced off against countrymen Anzor Khizriyev (RUS) and battled for their entire six minutes on the mat. Khugaev trailed Khizriyev 1-0 heading into the second period, but managed to score a counter takedown off Khizriyev’s shot near the edge to pull off the 2-1 victory.