Day One: Ivan Yariguin Memorial IT 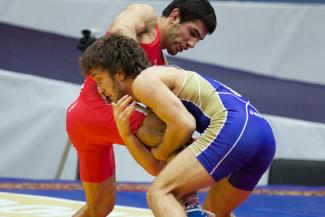 Day One: Ivan Yariguin Memorial IT

The “Toughest Wrestling Tournament in the World” lived up to its name on Friday, as former world champion Viktor Lebedev (RUS) failed to medal in the opening day of action, and Olympic champion Natalya Vorobieva (RUS) needed all six minutes to squeak out a hard-fought 2-0 won in her gold medal match.

Lebedev, who won world titles in 2010 and 2011 at 55 kg, dropped his quarterfinal match to finalist Vladmir Flagontov (RUS), 4-3, ceding a late takedown to the lanky Russian.

The 25th Annual Ivan Yariguin Memorial tournament was opened with an expensive and glitzy opening ceremony that included pyrotechnics, bedazzled dancers, and a video ode to the toughness of the Siberian people. The 30-minute show also featured a duet, hundreds of dancers, and a few dozen youth soldiers in a choir to sing the Russian national anthem.

As the song and dance concluded, Russian Federation president and FILA Bureau member Mikhail Mamiashvili officially opened the tournament and welcomed the 5000-plus fans in attendance for the finals. The crowd also stood in recognition of FILA Bureau member Natalia Yariguin, widow of Olympic champion Ivan Yariguin, and beloved matriarch of the Russian wrestling community.

Even after all the fireworks and displays of companionship, the first day of finals matches didn’t disappoint. Just as the day had been filled with creative scrambles and dramatic come-from-behind efforts, the finals showcased brilliant tactical matches and dominating performances.

As expected, three-time Olympic champion Kaori Icho dominated at 58 kg, her new weight class from now through 2016. The Japanese wrestler faced 2013 Junior world champion Tserenchimed Sukhee (MGL) in the finals of her first senior event. Sukhee was the aggressor, but was quickly made to pay for her offense ad dropped a 10-0 decision to Icho.

Natalya Vorobieva, the other Olympic champion in the night’s finals, had a tougher time with her opponent, fellow Russian Darima Sanzheeva. Vorobieva picked up a passivity point in the first and push out in the second to secure a 2-0 victory.

The match of the night featured 2013 Yariguin champion Aniuar Guduev (RUS) and challenger Ahmed Ghadzimagomedov (RUS) in a back-and-forth finals at 74 kg. Ghadzimagomedov held a criteria advantage with a 1-1 score and :10 left on the clock when he missed on a chest lock and gave up four points right before the final whistle to lose, 5-1.