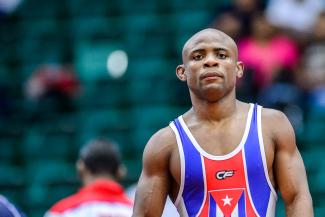 FRISCO, Texas (March 5) – Cuba stormed back from a subpar performance at the 2015 World Championships with a stellar showing at the Pan American Olympic Qualifier in men’s freestyle wrestling Saturday with five wrestlers earning berths at August’s Olympic Games in Rio de Janeiro, Brazil.

The top two finishers in each of the six men’s freestyle weight classes clinched spots Friday to advance to Rio.

The Pan Am Olympic Qualifier medal matches are set for 5 p.m. CT at the Dr. Pepper Arena in suburban Dallas and will be shown on a live webcast at UnitedWorldWrestling.tv. 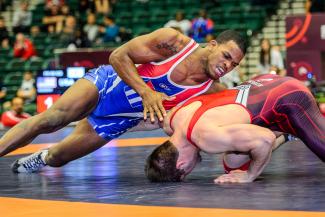 At 86kg, Cuban Salas Perez held off American Jake HERBERT 2-1 in the semifinals in a battle of former World silver medalists. Franklin GOMEZ MATOS (PUR) also advanced to the finals at 65kg after earning a controversial quarterfinal win over Brent METCALF (USA).

Gomez, a 2011 World silver medalist at 60kg and 2012 Olympian, built a 9-0 lead before Metcalf stormed back to close within 9-7 in the match’s final minute. Metcalf was in deep on a double-leg shot in the closing seconds of the bout and was close to scoring a takedown, but no points were awarded. The United States was out of challenges, so the key final sequence was not reviewed. Metcalf is a four-time World Team member.

Jaime ESPINAL (PUR) shot in to score in the final five seconds to rally past Pool AMBROCIO GREIFO (PER) to earn a 5-1 semifinal win at 86kg. Espinal was a 2012 Olympic silver medalist for Puerto Rico. Olympian Tervel DLAGNEV (USA), a two-time World bronze medalist, advanced to the heavyweight finals against veteran Korey JARVIS (CAN). 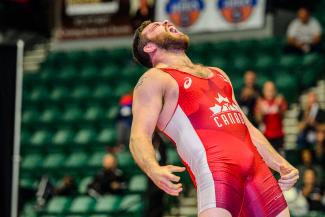 American Tony RAMOS trailed 2-1 early in the second period before scoring a takedown and a succession of leg laces for a 13-2 technical fall over Pedro MEJIAS RODRIGUEZ (VEN) in the 57kg semifinals. Ramos will face the explosive Bonne Rodriguez, whom he lost twice to last year, in the finals.

There will be two more Olympic Games qualifiers after the Pan Am Olympic Qualifier, in Mongolia in April and in Turkey in May.

The Greco-Roman competition is set for Sunday in Texas. 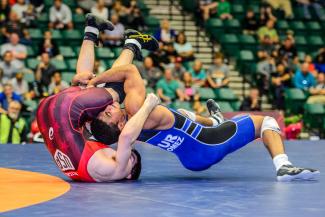