Cuba and USA impress in Pan Am Games finals on Friday 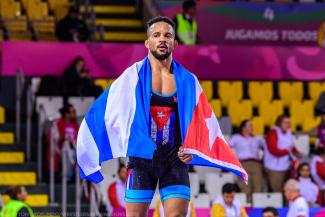 At 62 kg, Kayla MIRACLE (USA) defeated two-time Olympic bronze medalist for the title with a dominant technical fall. Miracle led 7-0 at the break before finishing up the match with a takedown and later a crotch lift for an eventual 12-0 win.

Winning gold at 68 kg was 2018 World bronze medalist Tamyra MENSAH-STOCK (USA), who picked up a win by pin in 2:17 in the finals over 2017 Pan American champion Olivia DI BACCO (CAN). The fall came shortly after Mensah-Stock scored on a single leg.

Earlier in the day, Fix recorded a 4-1 win over 2017 U23 World champion Reineri ANDREU ORTEGA (CUB).

In addition to Valdes’ gold, Cuba won three other bronze medals, coming at 68 kg and 76 kg in women’s freestyle and 57 kg in men’s freestyle.

There was one other gold medal match on Friday night. 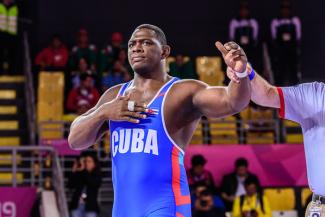 LIMA, Peru – Three-time Olympic champion and four-time World champion Mijain LOPEZ (CUB) made his return after taking more than a year off from competing. In his first tournament back, Lopez claimed his fifth Pan American Games gold medal, winning the 130 kg weight class in Greco-Roman on Thursday in Lima, Peru.

For gold, Lopez dominated Moises PEREZ HELLBURG (VEN) in 2:02 with an 11-0 victory, highlighted by an impressive four-point throw.

Wrestling at 67 kg, Borrero recorded three technical falls on the way to his first Pan Am Games title and did not give up a single point.

At 97 kg, Rosillo won his third Pan American event of the year, adding to his 2019 Senior and Junior Pan Am Championship golds.

A second-period four-point throw helped Rosillo separate himself from the American and eventually win the bout, 7-2.

Three other countries picked up gold medals in Greco this week, including Ecuador, United States and Venezuela.

After a 6-6 show-stopping win over two-time Pan Am champion Luis ORTA SANCHEZ (CUB) in the first round, Montano dominated the competition, securing two technical falls to propel him to gold, including an 8-0 victory in the finals over two-time Pan Am bronze winner Dicther TORO CASTAÑEDA (COL).

Winning the title at 77 kg was three-time Pan Am Championships gold medalist Pat SMITH (USA), who grinded out some solid wins en route to his first Pan Am Games gold.

Venezuela did, however, win a gold on Wednesday night as two-time Pan Am Championships gold winner Luis AVENDAÑO ROJAS (VEN) picked up the win at 87 kg.

In the team race, Cuba was first with 120 points, followed by Venezuela with 110 and USA with 91.