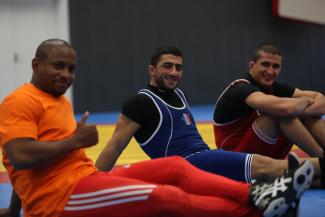 The week of educational and cooperative content was a combination of two separate courses: The Educator Course and the Greco-Roman Advanced School for Coaches. The Advanced Schools are held every year in each style and was the first time United World Wrestling cooperated with INSEP on a course.

[[{"fid":"2224","view_mode":"wysiwyg","type":"media","link_text":null,"attributes":{"height":440,"width":850,"style":"width: 450px; height: 233px; margin: 5px; float: left;","class":"media-element file-wysiwyg"}}]]The Educator Course was part of the new agreement with World Academy of Sport and the United World Wrestling Academy. The Trainers were supplied by World Academy of Sport in cooperation with the Interanational Rugby Board. The Educator Course focused on best practices, methodological and pedagogical aspects of coach education.

For the Greco-Roman Advanced School the mission statement was, “Working together to reinvigorate Greco- Roman wrestling – how can new approaches to training and coaching revive forgotten techniques and make Greco-Roman wrestling more exciting for wrestlers, coaches and spectators.”

Ivan IVANOV (USA), Momir PETKOVIC (USA) and Daniel ROBIN (FRA) led the Advanced School. The head of the referees commission, Karri TOIVOLA (FIN) was also present as many of the items discussed was in how to improve the rules of the sport.

“It was very good to cooperate: Coaches, referees, wrestlers altogether and share their ideas for the rules,” said Toivola. “It was also interesting to show the complicated situations because that way you saw coaches should have more training on the rules because many coaches thought something different than what is currently happening.”

In all, 30 coaches participated in the Mega Week. At the end of the course they made several recommendations on proposed rule changes and passed them ahead to Toivola for consideration by his commission.

“This is a first time for the coaches and we will need to work on making this more effective for everybody,” said Ivanov, a well-respected Greco-Roman coach living in the United States[[{"fid":"2225","view_mode":"wysiwyg","type":"media","link_text":null,"attributes":{"height":440,"width":850,"style":"width: 450px; height: 233px; float: right;","class":"media-element file-wysiwyg"}}]] and who emigrated from Bulgaria. “Overall everybody was adjusting every hour and had better understanding and the different ideas about our sport.”

In addition to the on-the-mat instruction, United World Wrestling's Florian Bakour also worked to provide a range of multimedia content to help coaches and educators absorb how points were being distributed, and how athletes were scoring their technical points. David LOPEZ (MEX) also provided excellent video analysis.

The courses were supported through close collaboration with Olympic Solidarity, the French Olympic Committee and the national wrestling federation of France.

In all the coaches and attendees voiced a positive outlook for the sport of wrestling and Greco-Roman.

“We’re all very optimistic,” said Ivanov. “I see a bright future for our sport.

United World Wrestling operates one Advanced Clinic per style, per year but is looking to add more in future years. Later this month men’s freestyle and female wrestling will be combined for the first time during the Advanced Clinic in Rio de Janiero.