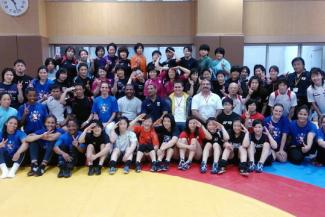 TOKYO – The Brazilian and the Japanese wrestlers square off every day in full-bodied training and heated – sometimes contentious -- combat.  And thus begins a cooperative program between athletes of the host countries of the upcoming summer Olympic Games.

Brazil’s top female wrestlers are training with their Japanese counterparts at the national training center in northern Tokyo as part of program that emerged from a conversation between the heads of Brazilian and Japanese wrestling federations.

Brazilian wrestling confederation president Pedro Gama Filho and Japan’s Tomiaki Fukuda came up with the idea of an exchange between future Olympic Games hosts at a FILA Bureau meeting in Rome in February.

The arrival of the Brazilian women’s squad on May 10 marked the beginning of the exchange with plans to see the Japanese women visit Brazil in November for a joint training camp and compete in the Brazil Cup.

The Brazilian women are scheduled to return home 25 May.

“This exchange is something positive for the Brazilian wrestlers.  And, we hope that this cooperative relationship will continue for a long time,” Filho said in Tokyo. “As countries that will welcome the next Olympic Games, we want to do our best.”

“Through the exchange, we hope to strengthen each other and improve the Olympic Games to be hosted by each locale,” added Fukuda.