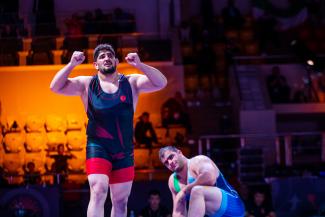 ALMATY, Kazakhstan (June 2) -- Amin MIRZAZADEH (IRI) thought he passed his toughest test in Almaty as he defeated arch-rival and world champion Aliakbar YOUSOFI (IRI) in a 2-2 comeback. But little did he expect that Osman YILDIRIM (TUR) will hand him a shock defeat in the final at 130kg.

The U23 world champion was the favorite to win the gold at the Bolat Turlykhanov Cup, the second Ranking Series event of the year, but Yildrim scored from par terre while Mirzazadeh failed to do the same. That proved to be the difference as the Turkey youngster won his second straight Ranking Series gold. His first was at home in Istanbul where he won gold over Beka KANDELAKI (AZE).

"I saw that my opponent in the final would be the Iranian wrestler," Yildirim said. "I concentrated a lot to prepare well. I know that the wrestlers from Iran and Georgia are very strong. The match was really tough. I was preparing and glad that it paid off."

Mirzazadeh began the day on a strong note with a 9-0 win over SATISH (IND) before advancing to the semifinal against Yousofi, who defeated Olympic silver Iakobi KAJAIA (GEO) 8-0 in the quarterfinal.

Apart from exchanging the passivity points, Mirzazadeh and Yousofi had one stepout each in the semifinal but Mirzazadeh scored the latest point to claim the win. 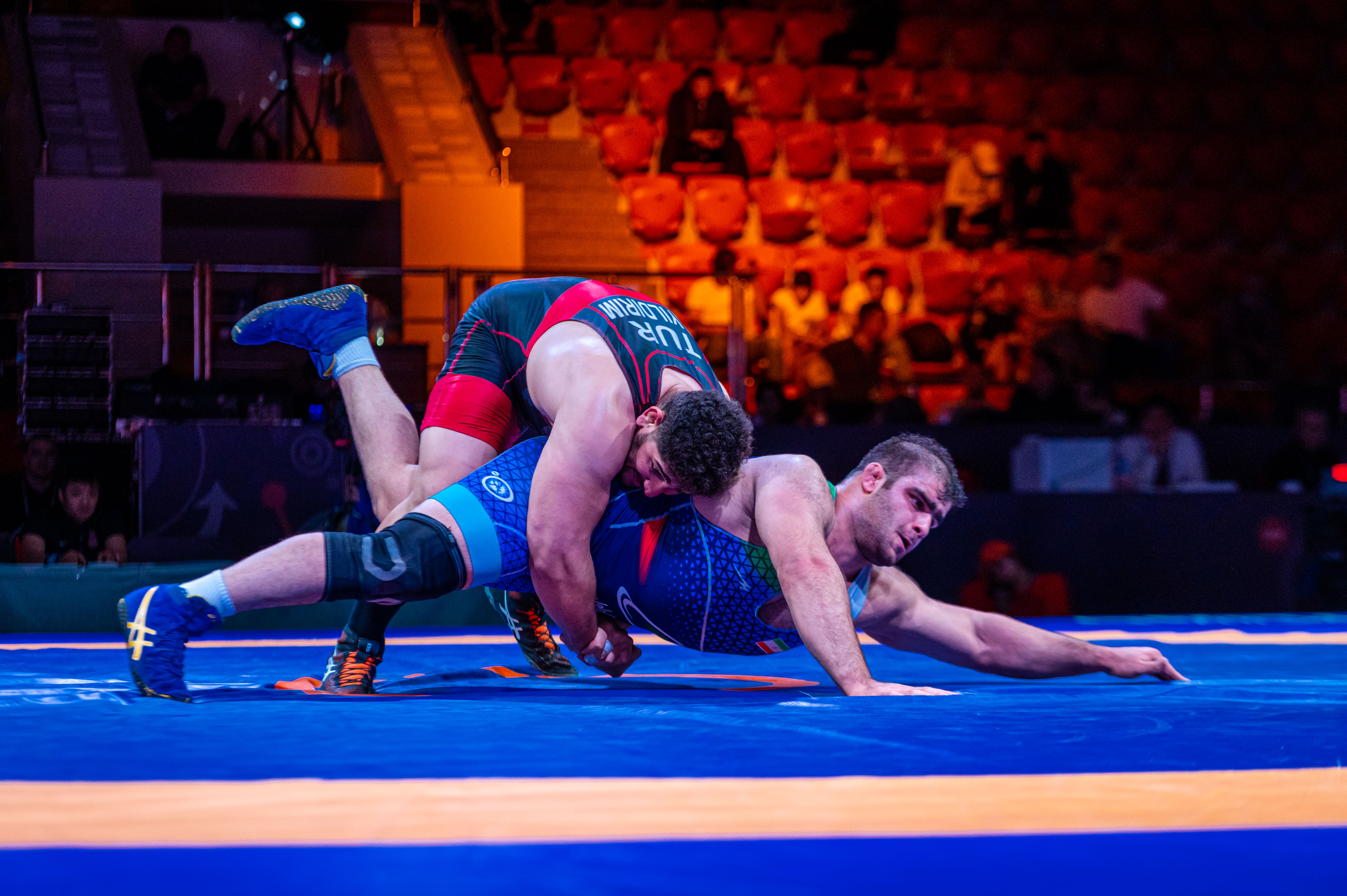 In the gold-medal bout, Mirzazadeh got the first point for Yildirim's inactivity and led 1-0. But the Iran Olympian gave up a point in the second period and Yildirim got the gut from par terre to lead 3-1 even as a surprised Mirzazadeh tried hard to score. He managed to push Yildirim after the gut wrench but could not score two more points which would have helped him win.

"It was very bad. I can't explain what happened there but I hope that I will be better at the World Championships," Mirzazadeh said.

The Bolat Turlykhanov Cup in Almaty was the first step towards selecting the team for World Championships for Iran but now it may need to find another path.

Although Mirzazadeh defeated Yousofi, missing the gold medal proves that he has the chinks in the armor which may push Iran coaches to rethink their selection.

For Yildirim, it will be a tough road to Belgrade as well as he has to go through four-time world champion Riza KAYAALP (TUR) to earn the spot on the team.

"I am ready to work hard to get the 130kg spot in the national team and I believe I will get it," he said. "We are glad that we have such an amazing wrestler as Kayaalp on our national team. The younger generation can take him as an example." 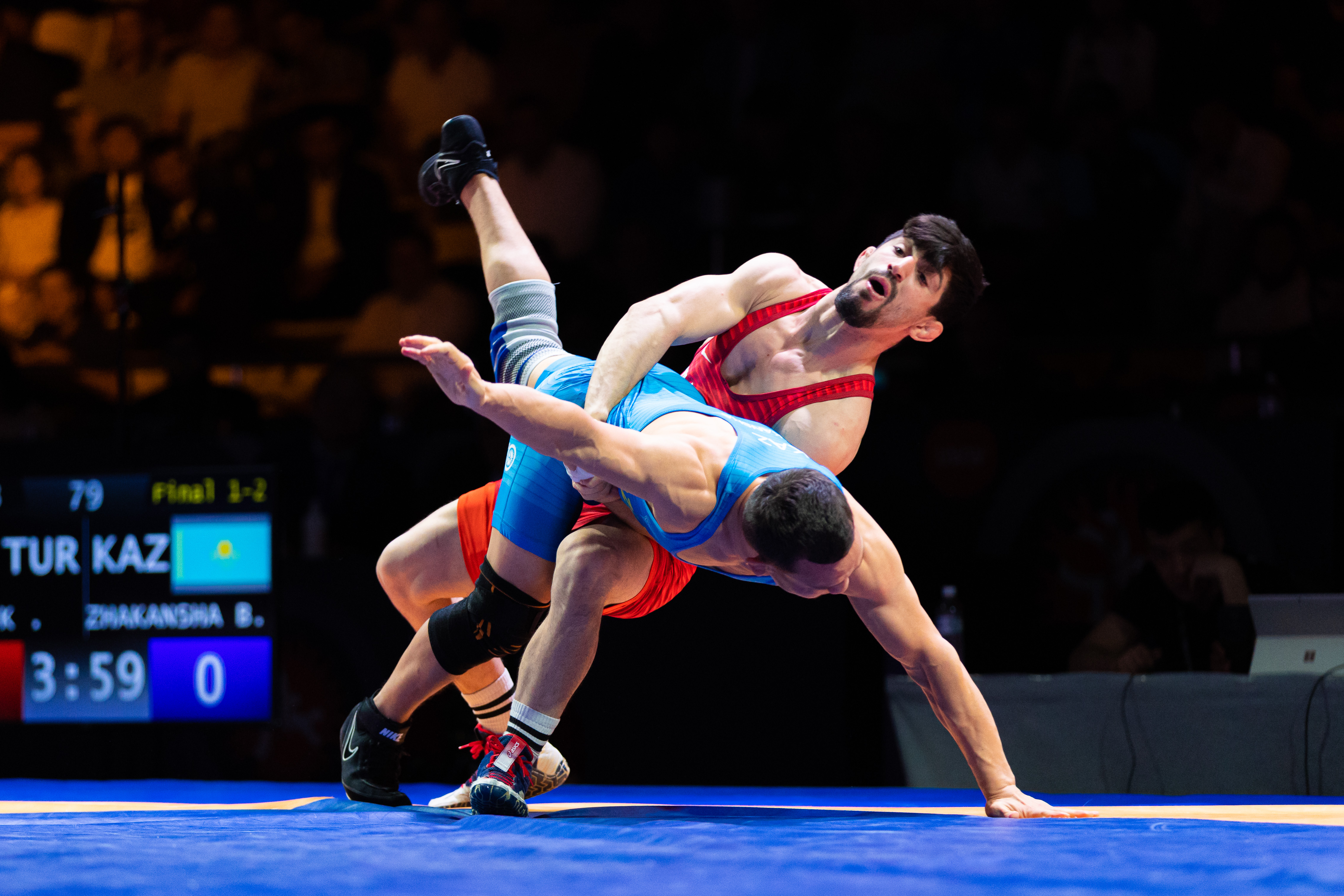 Another Turkey star who claimed the gold medal in Almaty was European champion Kerem KAMAL (TUR).

The three-time U20 world champ moved up a weight class to 63kg after winning the European Championships and came home with the second gold in two months as he won the 63kg weight class in dominating fashion.

He was drawn on the same side of the bracket as world silver medalist Zholaman SHARSHENBEKOV (KGZ) and the two clashed in the quarterfinals. Sharshenbekov began on strong and got the first points with a takedown. But Kamal that behind and scored a four-pointer from par terre to lead 5-2 at the break.

Kamal scored four points in the second period to Sharshenbekov's one to claim a 9-3 win his first Ranking Series gold medal this year.

"The Asian wrestlers are the strongest opponents for me and Zholaman [Sharshenbekov] is a very tough opponent as well," Kamal said. "It was a great experience for me to wrestle him at 63kg here."

The two had earlier met five years ago in the U20 World Championships final in Tampere which Kamal won 12-3.

"It was an amazing match against Zholaman," he said. "Five years ago, back in 2017, we wrestled in the U20 World final. I am so happy I won today. With the help of God, I will achieve good results."

In the final, he hammered Bagylan ZHAKANSHA (KAZ) 11-0 after two big throws for four points each from par terre.

With a great start to the year, Kamal now wants to win his first senior world medal and is focused on achieving that result in Belgrade, exactly 100 days from Thursday.

Basar, with the retirement of Cenk ILDIM (TUR), moved up to the 97kg weight class after a decade at 87kg and has begun well with gold at the Ranking Series event. 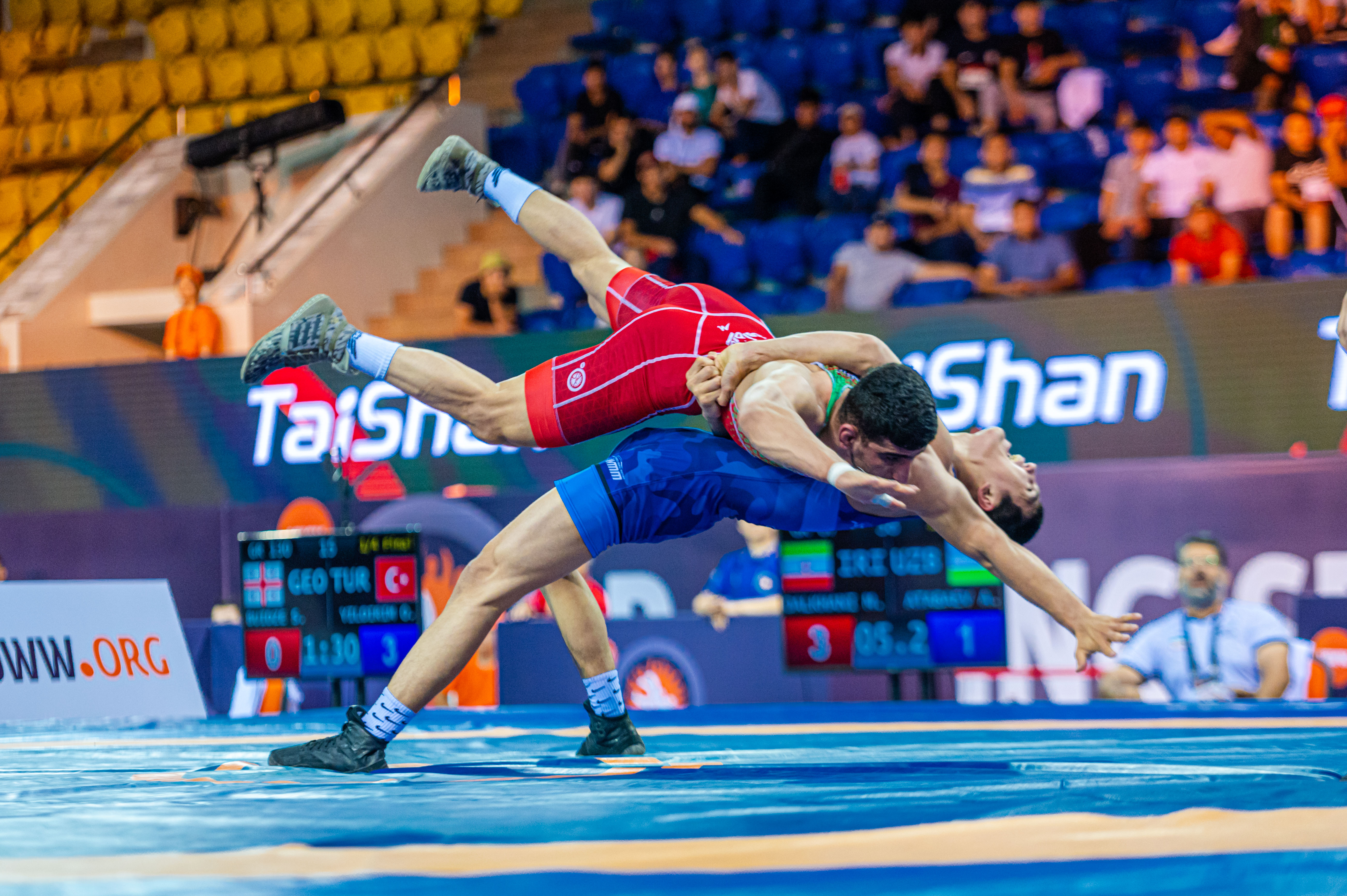 The 19-year-old left the arena with a number of new fans as they requested Atabaev for photos after he won his first senior-level gold medal.

In the semifinal against Dalkhani, Atabev was trailing 3-1 with five seconds left when he locked the world champion and pulled off a throw to get two points and win 3-3. Dalkhani had his arms locked in an uncomfortable position and landed on his left arm which got injured during the move.

The 2018 U17 world champion, who was introduced to wrestling by his father when he was four years old, said that he had prepared well for the bout against Dalkhani and remembered to wrestle until the end.

"He is a World champion and is very strong," he said. "I was getting ready for the match as the one who wasn't expected to win. But I proved to everyone that I deserve it. My coaches helped me to understand his wrestling, so I could win at the last second because I always wrestle till the very end." 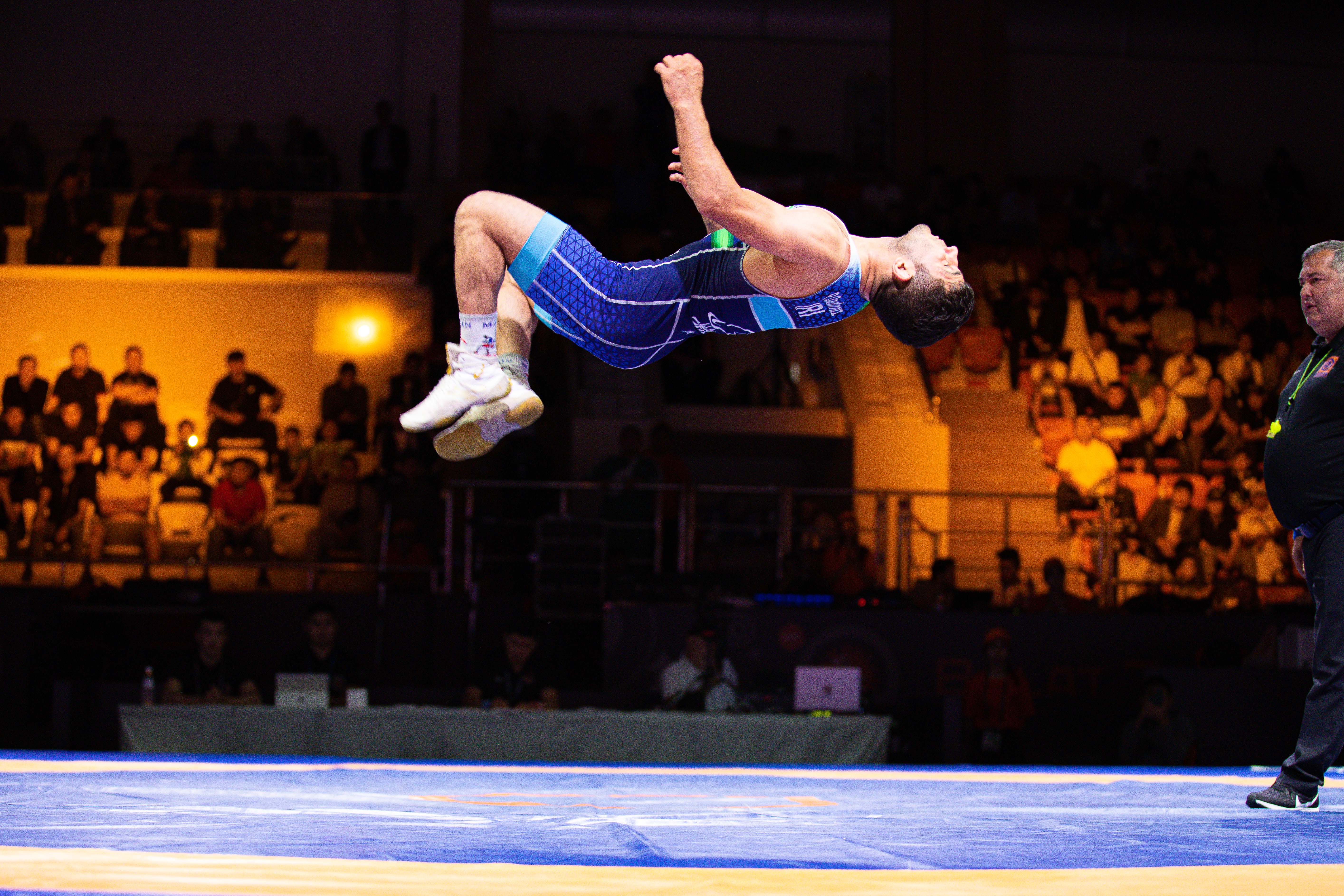 Iran did collect three gold medals out of the seven that were on offer on day one of the competition.

Another junior world champion from 2017 Poya DAD MARZ (IRI) secured the first gold of the night as he defeated Marlan MUKASHEV (KAZ) 4-2 in a tense final at 55kg. The U23 World silver medalist got the first point for Mukashev's passivity and then got a gut wrench from par terre.

However, when he was trying a second gut wrench, Dad Marz got stuck midway through the roll and Mukashev tried securing a fall via headlock. But Dad Marz quickly got to safety. In the second period, Mukashev was again called passive but instead of asking for a par terre, Dad Marz was happy to resume the bout from standing. He defended his 4-2 lead till the clock expired. 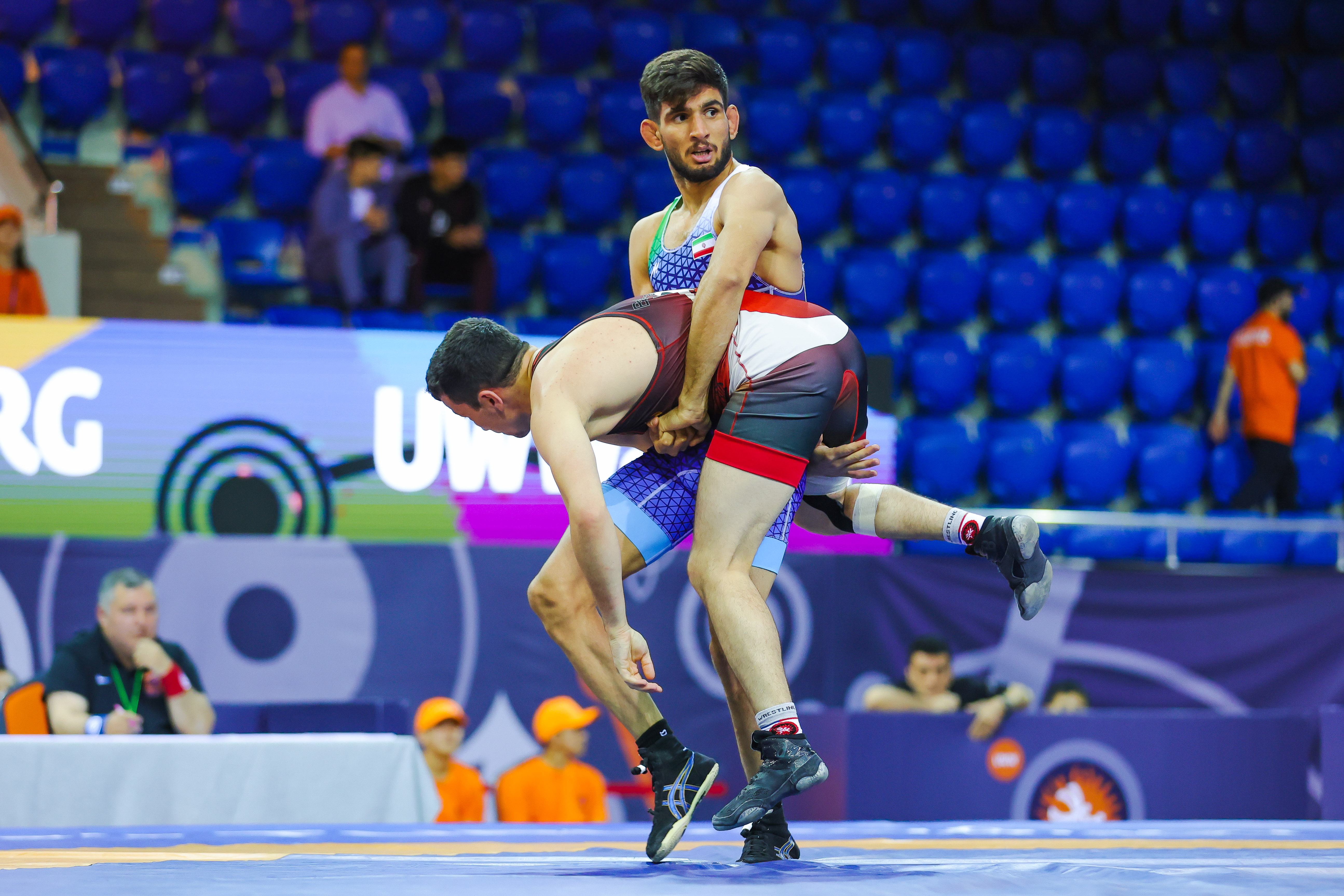 The second gold was secured by Ali Reza NEJATI who won the 60kg weight class.

In an all-Iran final, Nejati dominated compatriot Pouya NASERPOUR (IRI) to win the gold medal. He pulled off a four-point throw from par terre after getting a point for Naserpour's passivity. He later scored a stepout to lead 6-0 at the break.

In the second period, he was awarded another point for inactivity and finished the bout with an exposure throw for two points. The Tokyo Olympian competed for the first time since finishing with a bronze medal at the U23 World Championships in November last year.

Overall, he outscored his opponents 27-0 in the three bouts he wrestled to win the gold.

The final gold for Iran was won by Ramin TAHERISARTANG (IRI) as he defeated Aivengo RIKADZE (GEO) 2-1 in the 87kg final.

The bout began with some aggressive wrestling by the two but the Iranian was called passive and as Rikadze tried to get a roll going, he got caught on his back which gave Taherisartang the two points. The second period saw a lot of action but no scoring move as Rikadze suffered a close loss.