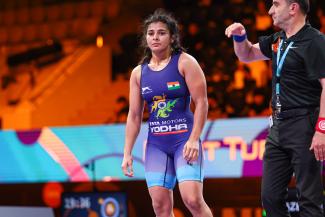 ALMATY, Kazakhstan (June 4) -- Three months back, the Indian women's team failed to win a single medal at the Ranking Series in Istanbul. But in a stunning turn of events, it won the team title at the second Ranking event in Almaty.

After winning the three gold and a bronze medal Saturday, India added two gold, one silver and one bronze to take their points tally to 192 points, 20 more than second-placed Kazakhstan which finished at 172 points.

Out of the six gold medals on offer in women's wrestling, Kazakhstan and Mongolia won two each as well. But the young Indian team outperformed beyond expectations despite missing a few big names from the line-up. 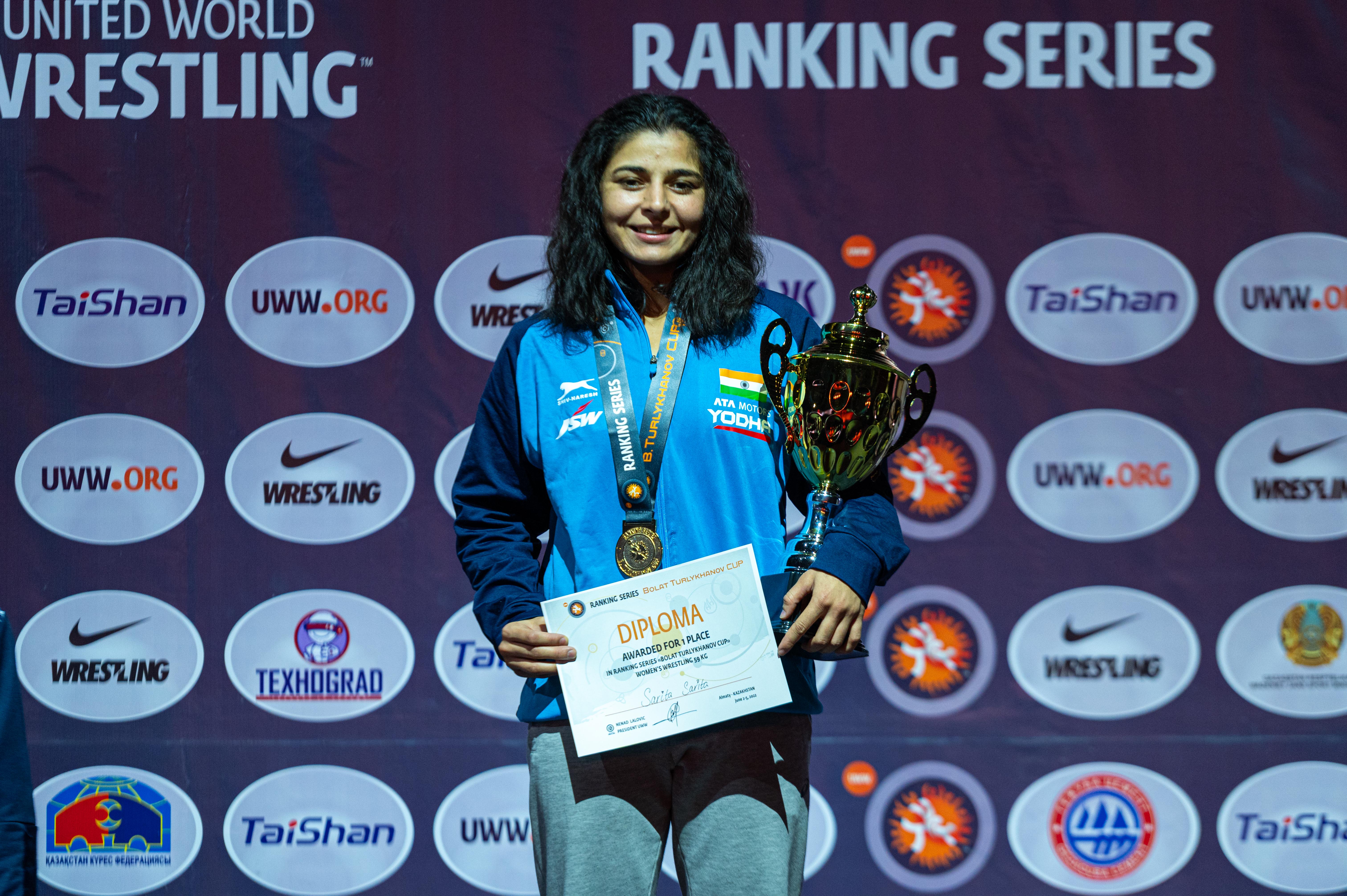 As women's wrestling came to a close, two-time Asian champion Sarita MOR (IND) and MANISHA (IND) won the gold at 59kg and 65kg respectively to propel India to the top.

Over the years, Mor had made a reputation of being one of the strongest defensive wrestlers in India. But with a young crop of wrestling coming up with an aggressive brand of wrestling, she found it difficult to match them. Despite being hailed as a top-level wrestler domestically, she found it difficult to win international medals internationally.

That all changed in 2020 when she won her first Asian gold medal at home in New Delhi. She defended her title in Almaty last year and added a World bronze medal in Oslo at 59kg.

"Earlier, my wrestling was very defensive," Mor said. "But for the last three years, I have managed to make some progress and improve it. I have benefitted from wrestling at numerous competitions and I hope to continue that to rectify my mistakes."

The change, as Mor explains, is brought about by her coach Rahul MANN (IND).

"My coach and husband Rahul has worked a lot on me," she said. "The most important one is to be active at the start of the bout. I used to stand in a lazy position at the start and give up points. But now it's changed. From the start till the final whistle, I have to wrestle."

She executed that plan to perfection in Almaty, dominating her competition as she gave up only two points in her four bouts. In a Nordic bracket, she began the day against Diana KAYUMOVA (KAZ), handing her an 11-0 defeat in Round 1. She would have liked to avenge her Asian Championships loss to Shoovdor BAATARJAV (MGL) but the Mongolian forfeited.

Mor had Aizhan ISMAGULOVA (KAZ) in the semifinal and after a slow start, she switched gears and scored takedowns to lead 6-2 at the break. Two minutes into the second period, Mor clinched a spot in the final with a technical superiority win. U23 European champion Zhala ALIYEVA (AZE) was the next to fall against Mor as she clinched the gold with a series of exposures.

"I am feeling so good and I have had 4 competitions here. Apart from the Asian qualifiers here I have managed to win a medal here. The best feeling is always when the Indian flag is raised," she said.

After a medalless start to the year in Istanbul, Mor won a bronze at the Asian Championships and now gold in Almaty. She has now set her eyes on winning the title at the World Championships.

"At Worlds, I lost 3-0 in the semifinal, but now I want to win the belt for India," she said. "As I said, I am continuing to improve with every tournament." 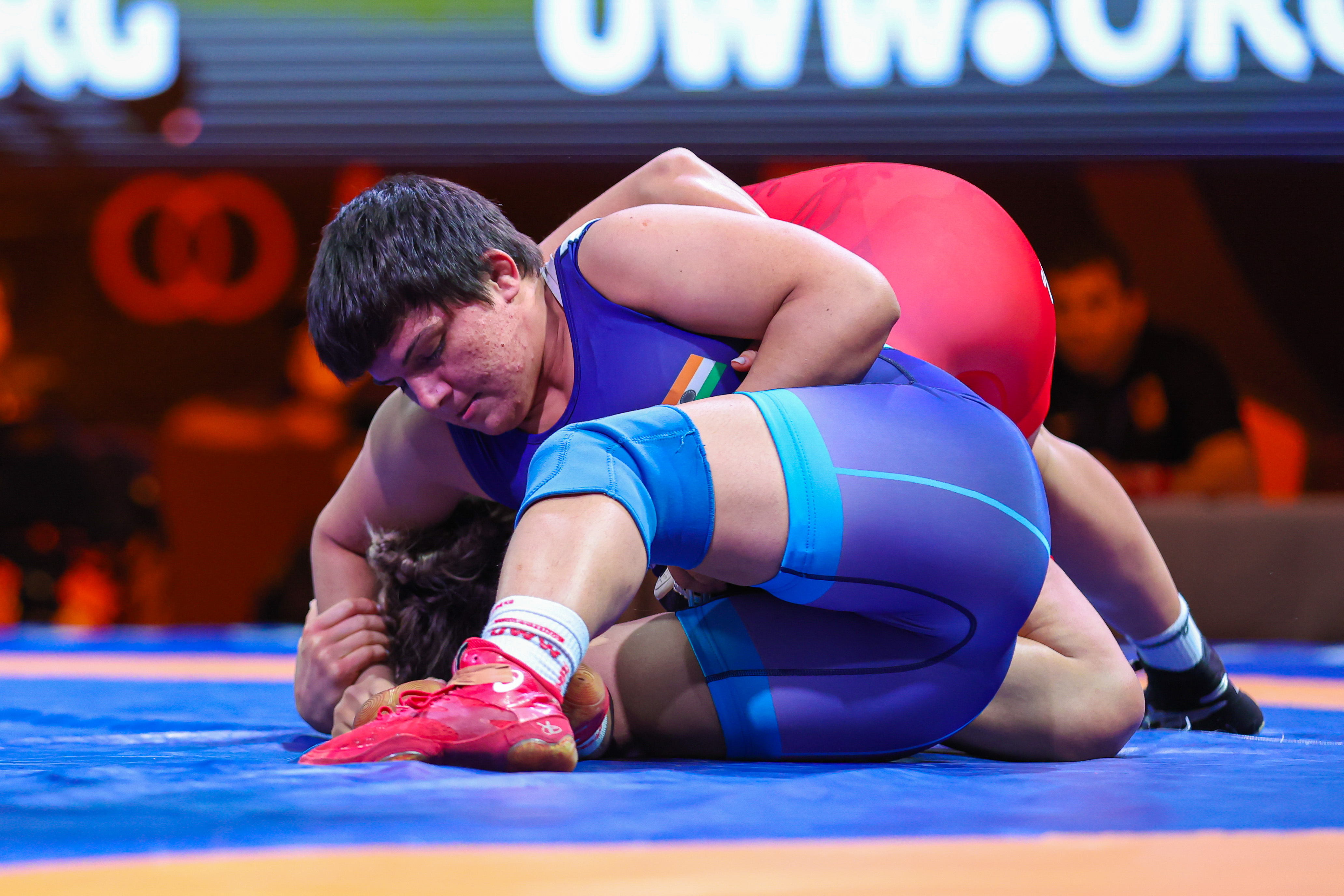 Perhaps it was her performance that rubbed off on her teammates as well. Manisha, who had suffered an 11-0 loss to Tokyo Olympian Elis MANOLOVA (AZE) in the first round, recovered to win the gold at 65kg by beating Manolova.

The Indian was first put on the clock for inactivity but she scored a takedown and a stepout during the activity period to lead 3-0 at the break. Instead of going for attacks, Manisha decided to counter Manolova's attempts and was successful in scoring two go behinds. As the clock ticked, frustration crept in for Manolova as she was warned for negative wrestling, giving the Indian another point.

Apart from the two bouts against Manolova, Manisha outscored her opponents 21-0 and saved the best for the last with a strong counter-attacking game.

U20 Worlds silver medalist BIPASHA (IND) could have made it three gold medals for India but Asian champion and World silver medalist Zhamila BAKBERGENOVA (KAZ) denied her at 72kg.

The two wrestled in Round 3 which was virtually a gold medal bout after both had one win each in the morning session. Bakbergenova built a 5-0 lead in the first period and extended it to 7-0 within the first 30 seconds of the second.

Bipasha, 20, took some time to understand her opponent and it was only in the fourth minute of the bout that she tried attacking. She managed a takedown and stepout and Bakbergenova was cautioned twice for passive wrestling.

But the Kazakhstan wrestler held off Bispasha and won the gold with a 7-5 scoreline. 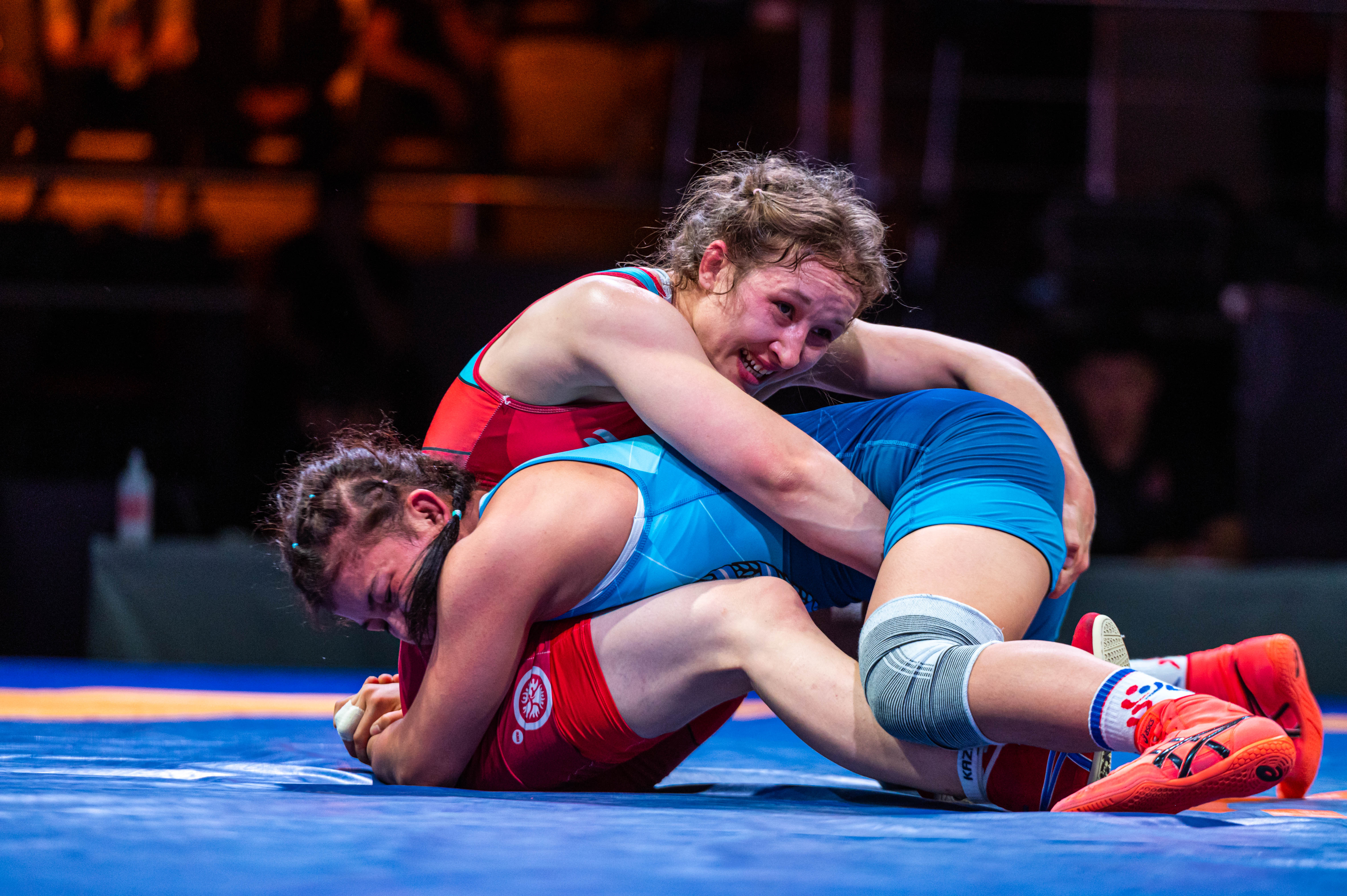 The second gold medal for Kazakhstan came from Marina SEDNEVA (KAZ) who defeated Shokhida AKHMEDOVA (UZB), 4-3 in the 55kg final. She was called for passivity in the first period but hit a four at the start of the second to lead 4-1. Akhmedova managed to get an attack late in the bout and scored two points for danger but failed to get another as the time expired. 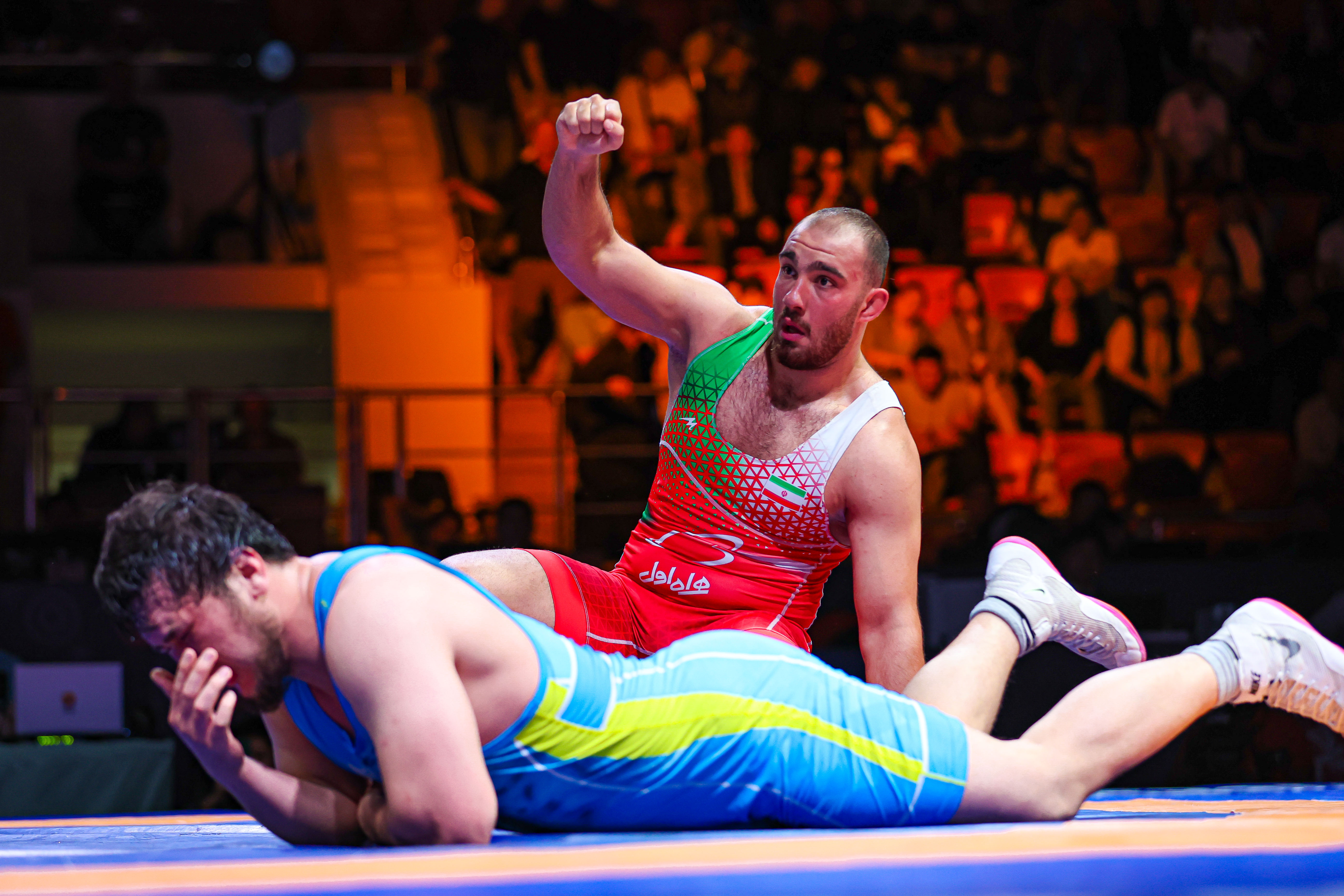 A stunned Amir ZARE (IRI) stood looking at the big screen at the Baluan Sholak Sports Palace. He, like the Iran fans, was hoping that the challenge from Yusup BATIRMURZAEV (KAZ) turns out to be unsuccessful.

The Kazakhstan wrestler, cheered by almost everyone at the venue, led 8-0 and challenged, asking for four points instead of the two awarded by the referee on his first throw. A successful challenge would mean a 10-0 win for him.

But as luck would have it, Zare had not landed in danger and the move was only worth two points. He got a point for the lost challenge.

With a fresh lease of life and a struggling Batirmurzaev, Zare recovered from 8-0 and then 10-7 to score 14 answered points to win the 125kg gold medal in Almaty 21-10 and silence a hostile crowd. 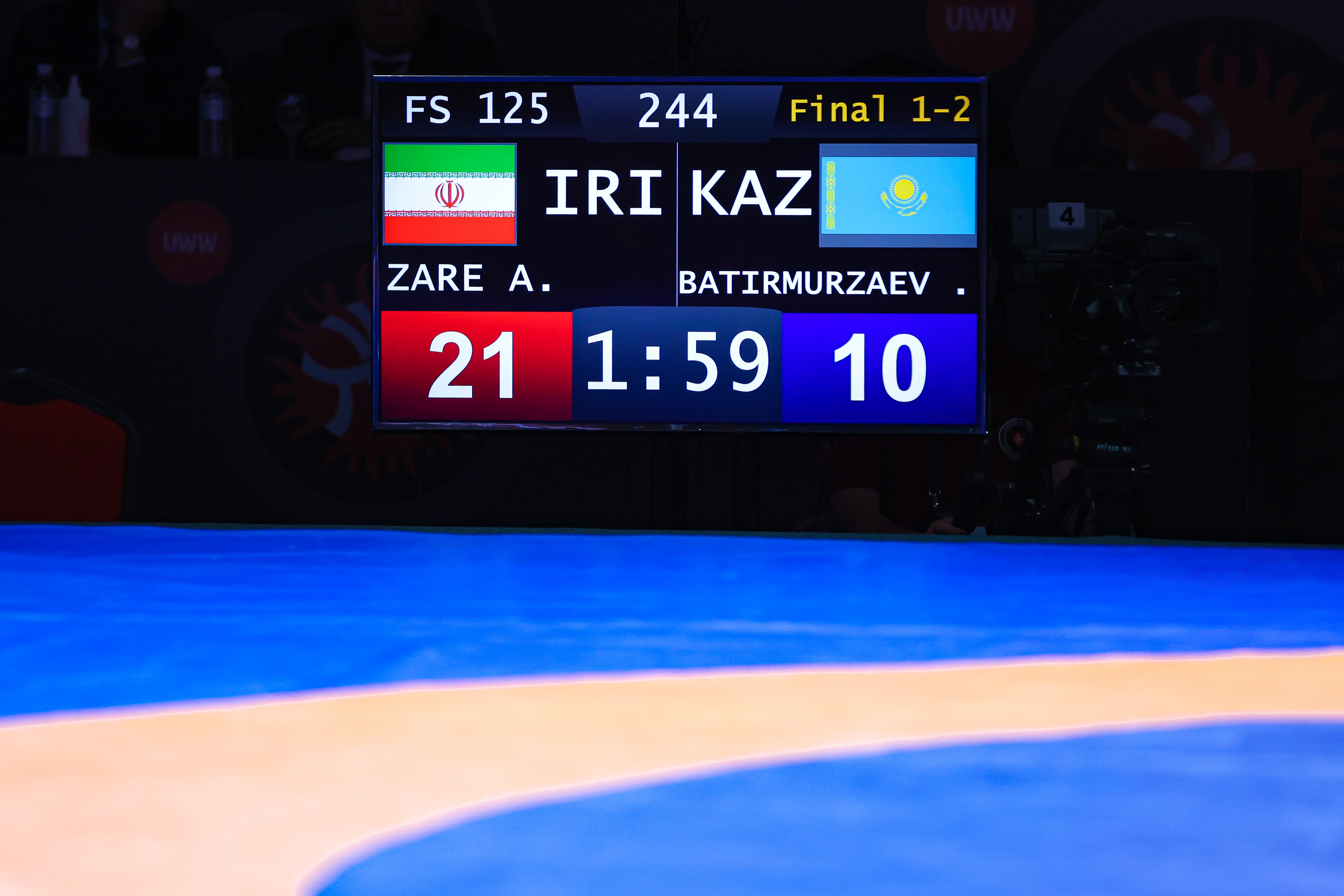 A scoreline that will be etched in wrestling fans' memory for a long time. (Photo: UWW / Kadir Caliskan)

"Yes [I am still shocked], from the final," Zare said with a smile. "I lost points in the final and earlier as well but I hope to compensate for it in the future and not repeat these mistakes."

It was a far from perfect tournament for the 21-year-old world champion as he struggled to find his rhythm from the start.

Another Kazakhstan wrestler Oleg BOLTIN (KAZ) had him in trouble in the first bout. Boltin used a four-point throw to lead 6-6 on criteria with only 23 seconds remaining but Zare scored three points from there to win 9-7. In the semifinal, world bronze medalist Lkhagvagerel MUNKHTUR (MGL) tested his cardio as Zare barely scraped through for a 3-0 win.

"It was my first time wrestling after a long break, after Norway exactly," Zare said. "I also had a minor foot injury that prevented me from training for a long time. But my coaches helped me be ready for wrestling here. I didn’t show a good quality of wrestling here but I hope to do my best in the future, especially in Belgrade." 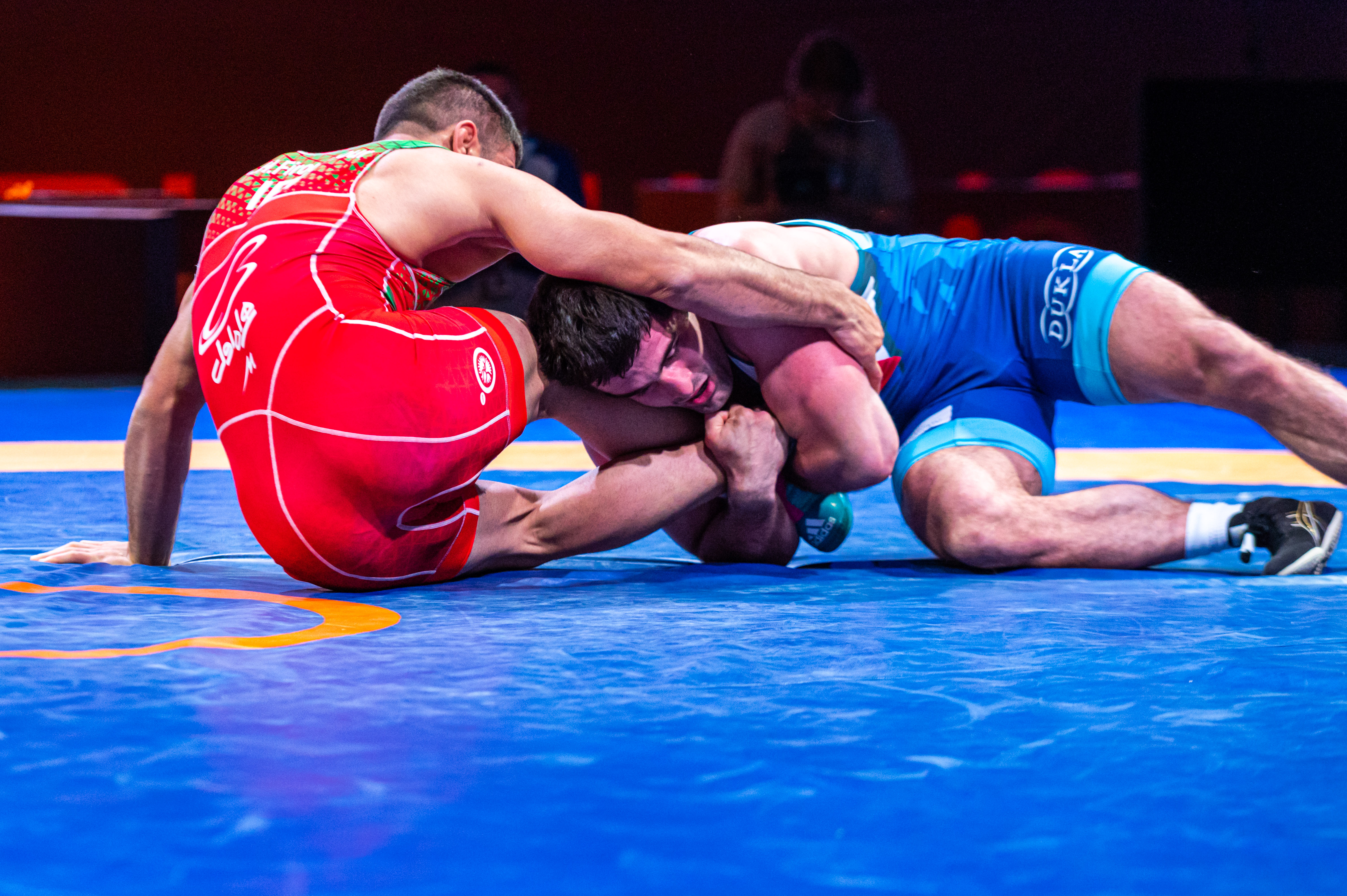 While Zare could recover from a bad start, U20 world champion Amirhossein FIROUZPOUR (IRI) suffered a 10-0 loss against Batyrbek TCAKULOV (SVK) after being caught in a leg-lace as the Slovakia wrestler finished the bout in 1:06.

Throughout the day, Tcakulov dominated his bouts, outscoring his rivals 31-1 including a semifinal win via fall over veteran Magomed IBRAGIMOV (UZB).

In the final, he used a move that he has not been very successful at but managed to pull off at the right moment.

"I was preparing for six minutes in the final," Tcakulov said. "I practice the leg lace every time in training, but it doesn't usually work at the competition. This time it worked.

"I was preparing for the tournament together with my Slovakian team and with our coach Erik Cap. I am going for only the win at every competition. It also depends on how well I have trained. This time as you can see I prepared well and my wrestling was good." 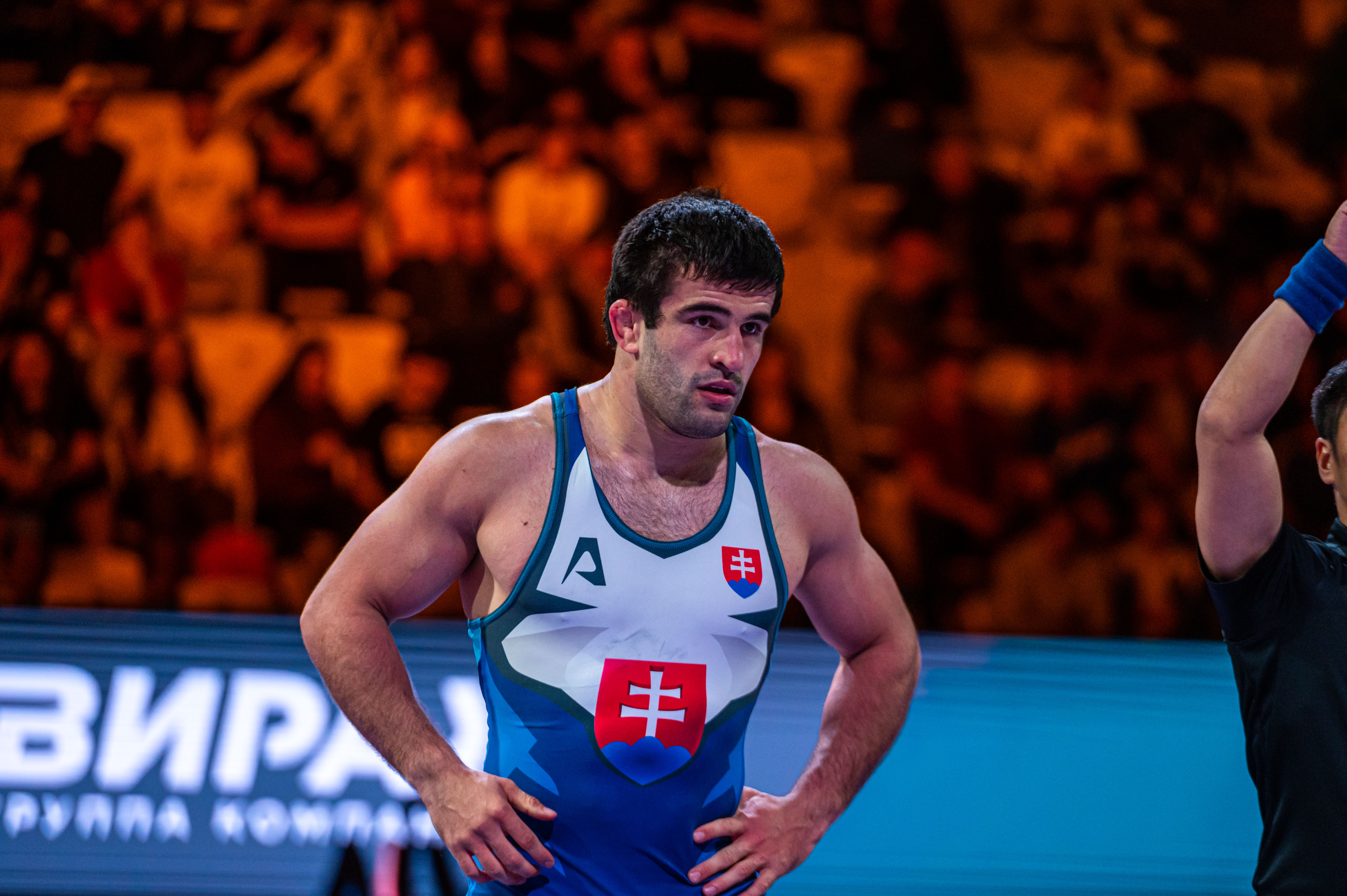 A former Russian champion at 92kg, Tcakulov switched to Slovakia earlier this year and won a bronze at the European Championships. While he has begun well, he is aware of the competition he is facing at this weight.

"I know that the competition is quite high at 97kg," he said. "But I'll keep working hard. There is not a big difference in kilograms, but the competition is a bit higher. This is my second tournament in this weight class, and now I am getting better and hope for the best."

He now hopes to wrestle at as many tournaments as possible to gain experience and win a medal at the Belgrade World Championships.

"My next tournament will be the Ranking Series Matteo Pellicone in Rome," he said. "I want to compete a lot at the tournaments, not only for improving my rankings but mostly for getting the experience. I haven't been competing for quite a while as I had a one-and-a-half-year break, but I kept training both in Slovakia and Ossetia."

The remaining eight freestyle weights will be in action Sunday, the final day of the Bolat Turlykhanov Cup. World champion Hassan YAZDANI (IRI) and Kamran GHASEMPOUR (IRI) are returning after a seven-month break while Bajrang PUNIA (IND) would look to continue his unbeaten record at Ranking Series events.

European champion Tajmuraz SALKAZANOV (SVK) is also entered and will wrestle at 74kg.