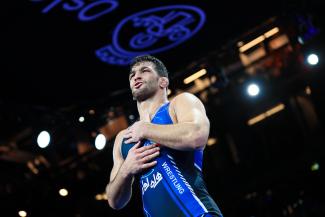 ALMATY, Kazakhstan (June 5) -- The final day of the Bolat Turlykhanov Cup Ranking Series event is here. Eight freestyle weights will be in action with multiple World and Olympic medalists taking the mat in Almaty.

13:35: Kamran GHASEMPOUR (IRI) has dominated his way to the 92kg final. At 57kg, Aman SEHRAWAT (IND) and Merey BAZARBAYEV (KAZ) are putting up a show. Sehrawat comes back from 6-0 down against a tiring Bazarbayev to win 10-9. He also wins the gold medal after winning all his four bouts.

13:10: Tulga TUMUR OCHIR (MGL) and Umidjon JALOLOV (UZB) on Mat B. The Mongolian leads 1-0 at the break after Jalolov's passivity. But he is hit with passivity as well and Jalolov takes the lead on criteria. Tumur-Ochir with his trademark underhook for four and he wins 5-1 against Jalolov.

13:00: Yazdani gives up a point for stepout but answers that with a takedown and lace. He leads 6-1 at the break. He begins with another takedown and then a stepout to extend his lead to 10-1. A double leg takedown finishes the bout 12-1

12:55: Hassan YAZDANI (IRI) is up against Azamat DAULETBEKOV (KAZ) in the 86kg semifinal on Mat C while at 74kg, Tajmuraz SALKAZANOV (SVK) is wrestling on Mat B

12:30: Tulga TUMUR-OCHIR (MGL) has set up a semifinal bout against Jalolov at 65kg after beating Komron KHOLOV (TJK) via technical superiority.

12:10: World silver medalist at 70kg Ernazar AKMATALIEV (KGZ) has a huge fan base in Kazakhstan and that showed even as he beat Meirzhan ASHIROV (KAZ) 5-3 at 70kg. He moves into the semifinal

11:55: Bajrang PUNIA (IND) faces a familiar opponent in Abbos RAKHMANOV (UZB). He gets two points for Rakhmanov's blocking. The Uzbek also has two cautions against him. But he gets a takedown and leads 2-2 at the break. Punia gets a point for Rakhmanov's passivity. But the Indian gives up a takedown in the final seconds to beat Punia 5-3

11:45: European champion Tajmuraz SALKAZANOV (SVK) has to work hard against Ikhtiyor NUVROZOV (UZB) at 74kg. Three stepout points for his 3-0 win against the Uzbek veteran.

11:40: Hassan YAZDANI (IRI), in a very Yazdani-way, breaks Fatih ERDIN (TUR) to start his day with a 12-0 win at 86kg. He will wrestle the Asian champion Azamat DAULETBEKOV (KAZ) in the semifinals

11:15: Daulet YERGESH (KAZ) trailed Asian silver medalist Gourav BALIYAN (IND) 5-3 at the break but catches the Indian in a leg lace and finishes the bout 15-5

10:50: Former U17 world champion Umidjon JALOLOV (UZB) looks in good touch. He picks up a technical superiority win over Ulukbek ZHOLDOSHBEKOV (KGZ) who is moving up to 65kg. Jalolov had a four-point move then got exposures to win 13-2

10:45: What a great start for world champion Kamran GHASEMPOUR (IRI). He wins via technical superiority against Viky CHAHAR (IND) in two minutes.

10:30: Welcome to day four of the Ranking Series event in Almaty. Are you excited to see the return of Hassan YAZDANI (IRI).