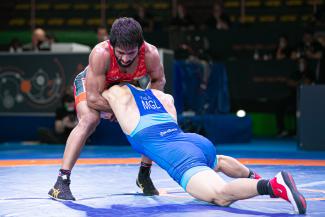 ULAANBAATAR, Mongolia (April 22) -- The final two days of the Asian Championships will see freestyle wrestlers take the mats. The draw for all 10 freestyle weight classes was held in Ulaanbaatar on Friday.

Olympic medalist Ravi KUMAR (IND) and Bajrang PUNIA (IND) will be in action alongside a strong Iran team as well. Japan, Kazakhstan and Kyrgyzstan are also bringing some known names to the competition.

Ravi KUMAR (IND) and Gulomjon ABDULLAEV (UZB) will clash for a second time in two months if both can hold true to their number one and two seedings respectively.

Kumar is sitting in the quarterfinal on the top side and will face Rikuto ARAI (JPN) in that bout. The semifinal will see Kumar or Arai facing the winner of Reza MOMENIJOUJADEH (IRI) and Zanabazar ZANDANBUD (MGL) who is seeded third.

The lower side has Abdullaev in the quarterfinal and is likely to face Rakhat KALZHAN (KAZ) in that bout. Third seed Almaz SMANBEKOV (KGZ) has to wait for the winner of Sunggwon KIM (KOR) and Muhammad BILAL (PAK).

The 61kg can see the clash of top seed Ulukbek ZHOLDOSHBEKOV (KGZ) and Rio silver medalist Rei HIGUCHI (JPN) in the semifinal on the upper side. The Kyrgyzstan wrestler is in the quarterfinal and will likely face defending champion Jahongirmirza TUROBOV (UZB) in that bout.

For Higuchi, he needs to beat Ali ALMOHAINI (KUW) to reach the quarterfinals where he can face one of Mekan MUHAMMEDOV (TKM) or Mangal KADIYAN (IND) who is seeded fourth.

The lower side of the bracket has the second seed Alibeg ALIBEGOV (BRN) in the quarterfinals. He will have to wait to find out his opponent as Darioush HAZRATGHOLIZADEH (IRI) and Insang CHOI (KOR) wrestle it out in the 1/8 finals.

Third seed Akbar KURBANOV (KAZ) will get one of the U23 world bronze Narankhuu NARMANDAKH (MGL) or Muhamad IKROMOV (TJK) in the quarterfinals before a potential semifinal against Alibegov.

If Abbos RAKHMONOV (UZB) can beat Seonho YOO (KOR) in his opening bout, he will face top seed Bajrang PUNIA (IND) in the quarterfinal. The winner is likely to face fourth seed Haji ALI (BRN) in the semifinal.

Tsogbadrakh TSEVEENSUREN (MGL) and Sanzhar DOSZHANOV (KAZ) are meeting in the first round on the lower side and the winner will get to face Alibek OSMONOV (KGZ) in the quarterfinal.

The lower side, however, has junior world champion Rahman AMOUZADKHALILI (IRI) as well. He makes his debut in the Olympic weight class of 65kg and will face Inayat ULLAH (PAK) in his first bout before a quarterfinal against third seed Kaiki YAMAGUCHI (JPN). That bout could be a clash of the styles as both like to take their time to attack.

The favorite to win the gold and world silver medalist Ernazar AKMATALIEV (KGZ) and defending champion Syrbaz TALGAT (KAZ) are seeded number one and two respectively and can only meet in the final.

For that, Akmataliev will have to first beat one of Perman HOMMADOV (TKM) or NAVEEN (IND) in the quarterfinals. In the semifinals, he is likely to face the U23 Asian champion from 2019 Temuulen ENKHTUYA (MGL)

Talgat will get either Yongseok JEONG (KOR) or Begijon KULDASHEV (UZB) in the quarterfinals but the semifinals can be a bigger test as he will have to beat one of Mohammademehdi YEGANEHJAFARI (IRI) or Taishi NARIKUNI (JPN).

Defending champion Nurkozha KAIPANOV (KAZ) is seeded third at 74kg which means he will have Islambek OROZBEKOV (KGZ) in the semifinals if they hold true to their seeding. Orozbekov was bronze when Kaipanov won gold in 2021.

But Kaipanov will have to go past either the '21 Asian bronze Ikhtiyor NAVRUZOV (UZB) or the upcoming Yash TUSHIR (IND). The Navruzov-Tushir bout will be a display of some willy wrestling and Tushir's stamina.

Orozbekov has to beat one of CHARLYYEV (TKM) or Hong LOU (SGP).

Top seed and former world bronze medalist Yones EMAMICHOGHAEI (IRI) will be leading the charge for Iran and a quarterfinal against Daichi TAKATANI (JPN) who won a bronze in 2020.

Fourth seed Byambadorj BAT-ERDENE (MGL) will have to wrestle against Seungbong LEE (KOR) or Lakmal Wijesooriya (SRI) for a spot in the semifinals.

Number one seed and '20 Asian champion Arsalan BUDAZHAPOV (KGZ) can set up a rematch of that final from New Delhi against Gourav BALIYAN (IND) in the semifinal in Ulaanbaatar. That can only happen if they both win their first bout.

Budazhapov will wrestle one of Jasurbek USMONOXUNOV (UZB) or Bumgue SEO (KOR) in the quarterfinal to reach the semifinal while Baliyan has to beat Gurbanmyrat OVEZBERDIYEV (TKM).

Number two seed Ali SAVADKOUHI (IRI) will likely wrestle Byambadorj ENKHBAYAR (MGL) in the quarterfinal. A win will take him to the semifinal.

That bout can be against third seed Zhiger ZAKIROV (KAZ) but first, he will have to go past the winner of Yudai TAKAHASHI (JPN) and Shuhrat BOZOROV (TJK).

Since world champion Hassan YAZDANI (IRI) is not entered, Azamat DAULETBEKOV (KAZ) takes the top seed and can face Bobur ISLOMOV (UZB) in the quarterfinal. A semifinal against either Saiakbai USUPOV (KGZ) or Muhammad INAM (PAK) awaits.

Second seed and former world silver medalist Deepak PUNIA (IND) will begin his campaign against Dovletmyrat ORAZGYLYJOV (TKM) or Mohsen MOSTAFAVI (IRI). If he manages to reach the semifinal he can face third seed Gwanuk KIM (KOR). Kim will have to beat one of Shota SHIRAI (JPN) and Temuujin MENDBILEG (MGL).

Junior world champion Amirhossein FIROUZPOUR (IRI) did not get a seed but will be primed to win the gold at 92kg. He wrestles Adilet DAVLUMBAYEV (KAZ) in the quarterfinal and can face the top seed and '20 Asian silver Takuma OTSU (JPN).

The Japanese wrestler has Jinmyeong KIM (KOR) first up in the quarterfinal.

The lower side has Orgilokh DAGVADORJ (MGL) as the second seed and two-time age-group world medalist Viky CHAHAR (IND) as the third seed. Stopping them from facing other in the semifinal will be Ajiniyaz SAPARNIYAZOV (UZB) and Mirlan CHYNYBEKOV (KGZ).

Chahar has Chynybekov in the quarters while Dagvadorj will wrestle Saparniyazov.

Second seed Mohammadhossein MOHAMMADIAN (IRI) is the favorite to win the gold at 97kg and for that, he has to beat Zyyamuhammet SAPAROV (TKM) in the quarterfinal and one of third seed Satywart KADIAN (IND) or Takashi ISHIGURO (JPN) in the semifinal.

His finalist will come from the top side which has top seed Batzul ULZIISAIKHAN (MGL) who was second at the 2019 Asian Championships. He wrestles Yasar Dogu 2022 bronze medalist Mamed IBRAGIMOV (KAZ) in the quarterfinal.

The other quarterfinal will see Minwon SEO (KOR) against Mukhammadrasul RAKHIMOV (UZB).

Top seed and junior World bronze Anirudh KUMAR (IND) will have to battle it out against Rustam ISKANDARI (TJK) in the quarterfinal. Iskandari is a three-time Asian medalist and is the favorite to reach the final from the top side.

But he has Tokyo Olympian at 97kg Alisher YERGALI (KAZ) waiting in the semifinals. The fourth seed Yergali still has to beat Shatlyk HEMELYAYEV (TKM) in the quarterfinal.

The winner of these quarterfinals will clash in the semifinal before the final.