Adekuoroye Shuts Maroulis Out in Build Up to Tokyo Games 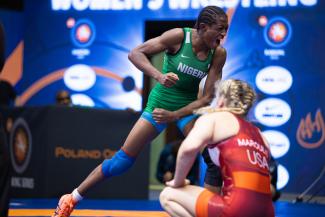 WARSAW, Poland (June 11) -- It was the calm before the storm. Odunayo ADEKUOROYE (NGR) jumped before the start while Helen MAROULIS (USA) was focused in her customary prayer before the bout. But by the end of it, the Nigerian let out a loud scream as she punched the air after winning her quarterfinal at the Poland Open Ranking Series. Perhaps she would not have done it if it was someone else. But Adekuoroye knew a win over an Olympic champion is no mean feat.

What made the win special over Maroulis was that she had lost to her in the previous two meetings. Back in 2018, the USA wrestler won 4-1 at Beat the Streets competition and she won a tight bout six years ago at the Golden Grand Prix, Baku in 2015.

“When we saw the entries of the Poland Open competition, we only focused on Helen,” Purity AKUH, Adekuoroye's coach, said. “We rewatched the two videos where she had lost to Helen and planned.”

The plan was successful as Adekuoroye chalked out a shutout 13-0 win over Maroulis in the quarterfinal of the 57kg weight class. So dominant was the Nigerian that she finished the bout with a minute and 32 seconds remaining. Helen, a two-time world champion as well, was competing for the first time since winning the gold medal at January's Henri Delegane tournament in France.

Unfazed by her opponent's stardom, Adekuoroye paced the bout according to herself and both wrestlers waited for an opening for the first two minutes of the bout. But there was none. The USA wrestler gave up a point for passivity as well.

But as the first period neared its end, Adekuoroye went for it. Perhaps Maroulis was waiting for a single leg attack like their previous meetings. She was wrong. Adekuoroye blasted a double-leg and got a takedown to lead 3-0. In the past, Maroulis has blocked the left hand of her rival to close out that space and only allow single leg attacks which she manages to defend more often than not.

“Odunayo is a very aggressive wrestler,” her coach said. “I have to calm her every time she goes over board. I just tell her to breath and today as well we wanted her to be calm.”

When the second period began, Adekuoroye kept Maroulis' combination of ankle-pick and trip in check. A move that has given Maroulis decent success was tried in vain.

It gave way for a counter from Adekuoroye as she brought out another double and got four points after a successful challenge. The lead was now 7-0. Maroulis was restless as she tried to shoot for her legs in vain.

As the Nigerian's confidence grew, she finally attempted a single leg as well and off-balanced Maroulis. The score was 9-0 in favor of Adekuoroye. Maroulis has fallen on the defensive mode long ago in the bout. That takedown tore her down.

Adekuoroye shot again for the left leg and lifted her opponent over her shoulders. Instead of slamming her down, Adekuoroye flipped Maroulis back,  got four points and won the bout 13-0.

There was no crowd at the Ursynow Arena in Warsaw, but if there was, it would have witnessed the tension between the two despite the score suggesting a one-sided contest. The two exchanged a few words after the bout, but Adekuoroye just ran off to the warm-up fall to prepare for the next bout.

She now faced an Olympic silver medalist in Valeria KOBLOVA ZHOLOBOVA (RUS) in the semifinals. However, it was anti-climatic as the Russian surrendered the bout in just a minute and 10 seconds. A series of double leg attacks from Adekuoroye combined with a leg lace was enough for a 10-0 win for her.

There were no singing celebrations but those may be reserved after the final but Adekuoroye announced herself as a serious contender for gold medal at the Tokyo Olympics and stir up the storm.