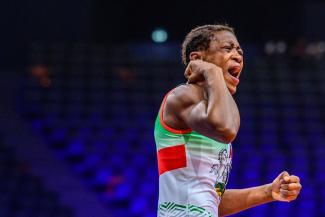 The 2018 African Senior Championships kick off tomorrow morning in Port Harcourt, Nigeria with over 150 wrestlers from 20 nations set to compete.

Freestyle (Saturday)
Three of the top-four 57kg placers from a year ago will head to Port Harcourt. Last year's champion Chakir ANSARI (MAR) and Abdelhak KHERBACHE (ALG), last year’s runner-up are set to compete at the same weight class again. Also competing at 57kg is fourth-place finisher from a year ago, Ebikewenimo WELSON (NGR) who is looking to stop a back-to-back finals party.

Leading the charge for the 61kg and 65kg gold medals are a duo of multiple-time Olympians in Augusto MIDANA (GBS) and Adama DIATTA (SEN). Midana has wrestled in three Olympic Games and is looking to win the African championships for the seventh time. Diatta is a two-time Olympian and is looking for his eighth title.

At 70kg, Jean Bernard DIADIA (SEN), the three-time champion and last year's runner-up wants to get back to his winning ways and block the probable finals rematch between Ogbonna Emmanuel JOHN (NGR) and Maher GHANMI (TUN).

A couple of young studs in Ayoub BARRAJ (TUN) and Fredylan MARAIS (RSA) are looking to capture titles at 74kg and 79kg.

Barraj is coming up to the senior-level to look for gold after winning the African junior championship a year ago. If he wants to win 74kg title, he'll have to go through defending champion, Mustafa ALI (SUD).

After placing twice in Greco-Roman, Reda MOUENISS (MAR) will make the jump from Greco-Roman to Freestyle and try to win gold at 92kg.

The 97kg weight category has been owned by Soso TAMARAU (NGR) for the past few years. Tamaru, the Olympian and returning champion is looking to win his third title. The two wrestlers who will be responsible for slowing Tamarau down will be Mohammed FARDJ (ALG) and Martin ERASMUS (RSA).

Rounding out the battle for freestyle titles will be Sinivie BOLTIC (NGR) and African junior champion, Khaled Omr Zaki Mohamed ABDALLA (EGY) at 125kg. If the Olympian Boltic can capture gold this weekend, that would be his fourth gold medal but only his first since 2012.

Women's Freestyle (Sunday)
Women's freestyle has an opportunity to open up with back-to-back rematches of last year's finals.

At 50kg, 2016 Olympian Mercy GENESIS (NGR) will look to defend her title from a year ago where she defeated two-time African cadet champion, Sarra HAMDI (TUN) to take the title.

Moving to 53kg,Maroi MEZIEN (TUN), a 2012 Olympian, is on a quest to capture her fifth African championship gold medal. Bose SAMUEL (NGR) will be looking to even the score as last year Mezien got the best of her on her way to her fourth crown.

Christiana NWOYE (NGR) has an opportunity to better her second-place finish from last year. Looking to snatch the 55kg gold medal from Nwoye will be Faten HAMMAMI (TUN), the 2015 African cadet gold medalist.

The clear-cut favorite at 57kg is United World Wrestling's History Maker of 2017, Odunayo ADEKUOROYE (NGR). If Adekuoroye, the 2017 world silver medal and 2016 Olympian can win this weekend, that’d give her four African championship gold medals to her name.

Bisola MAKANJUOLA (NGR), a runner-up last season will have to get through the experienced Safietou GOUDIABY(SEN) who is wrestling in her seventh African championship if she's going to want to win the 59kg title.

Tussling for the 62kg title will be Aminat ADENIYI (NGR) and Lilia MEJRI (TUN). Adeniyi is an Olympian and two-time African champion. Mejri, who won the African Championship bronze medal is no stranger to the big stage, as she was a world representative for Tunisia at the 2017 Junior World Championships.

African junior Champion Nour JELJELI (TUN) will have an opportunity to see how she stacks up against Olympian Amuchechi RUEBEN (NGR) for the 65kg title. Jeljeli's will be competing for the first time at a senior-level, while this will be Ruben’s (NGR) first time wrestling since the 2016 Olympic Games.

Gofit is down from 75kg where she won her first African championship a season ago and Ibrahim, the 2016 Olympian, is coming back to compete for the first time since 2016 where she won the 75kg title.

Ait Ouagram, the two-time Olympian and last year's champion is the favorite to take home the 77kg crown. He is looking to bring his gold medal total into the double-digit mark, as he currently owns nine titles. The last time Ait Ouagram lost at the African championship was ten years ago when he walked away with the bronze medal.

Radhouane CHEBBI (TUN), the two-time Olympian and the three-time champion is favored to take home the 130kg title.

Two of the top-three finishers from a year ago return to 60kg in returning champion Anwar TANGO (MAR) and third-place finisher Abdennour LAOUNI (ALG).

At 63kg, one of the favorites will be Fouad FAJARI (MAR). The 2012 Olympian usually wrestles both styles, but this year he'll only be wrestling Greco. Another favorite at this weight will be Souleymen NASR (TUN) who was an African junior champion last year.

The two wrestlers competing for gold at 72kg are Aziz BOUALEM (MAR) and Emmanuel Chinonso NWORIE (NGR). A three-time world team member, Boulaem is wrestling in his eighth African championships. For Nworie, this will be his first time competing since 2016 when he was down at 66kg.

The battle at 87kg will be between two guys who are fighting to win their first African titles. Adem BOUDJEMLINE (ALG) was a finalist from a year ago, and Mohamed Skander MISSAOUI (TUN) who finished in third place.

Two Olympians in Hemza HALOUI (ALG) and Choucri ATAFI (MAR) are expected to meet in the 97kg finals. Haloui is a four-time finalist with three of those being in Greco-Roman and one in Freestyle. Atafi will look to make the finals and best his trio of third place finishes. 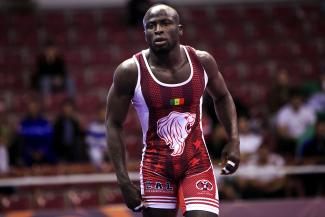 PORT HARCOURT, Nigeria (February 10) - Adama DIATTA (SEN) ventured to Port Harcourt with aspirations of capturing his eighth African title. The two-time Olympian outscored his opponents 21-3 on his way to his ninth finals.

In the 61kg finals, Diatta controlled Chedli METHLOUTHI (TUN) for the entire match, sealing his 5-2 victory late in the second period with an underhook throw by to a single leg.

At 57kg, three of the top-four placers from a year ago returned to this year’s African Championships. Ebikewenimo WELSON (NGR), the fourth-place finisher from a year ago and Jan Louwrens COMBRINCK (RSA) stopped Chakir ANSARI (MAR) and Abdelhak KHERBACHE (ALG) from making back-to-back finals.

In the finals, Combrinck found himself down 4-0 after giving up two early takedowns. He narrowed Welson’s lead to 4-2 after picking up a takedown of his own. Shortly after his first takedown, Combrinck picked up a throw and eventually stuck Welson late in the first period.

Amas DANIEL (NGR), Nigeria’s world team representative in 2010 snagged the 7-2 win over Haithem DAKHLAOUI (TUN), the 2017 African Championships fifth-place finisher after securing three takedowns and a point for a lost challenge in the 65kg finals.

Reigning 70kg champion Ogbonna Emmanuel JOHN (NGR) thought his hopes for back-to-back titles were derailed after six minutes of wrestling. The scoreboard showed Amr HUSSEN’s (EGY) named underlined after a 2-2 battle, but that was incorrect. John scored a two-point move, and Hussen scored two one-point moves, which gave John the lead on criteria and his second African gold medal.

Ayoub BARRAJ (TUN), the African junior champion from a year ago picked up two one-point scores on the way to defeating Sami Hamdi AMINE (EGY) for the 74kg title.

Moving to 79kg, Ekerekeme AGIOMOR (NGR) dominated the match from the first whistle. He took a 7-0 lead into the second period before picking up a pair of takedowns to defeat Fredylan George MARAIS (RSA), 11-0.

Melvin BIBO (NGR) improved on his 2017 African Championships third-place finish by not only making it to the finals but by picking up a 10-0 technical superiority victory over Hein Jakobus JANSE VAN RENSBURG (RSA) in the 86kg gold medal bout.

Hosam Mohamed Mostafa MERGHANY (EGY) picked up the 3-0 win over Robert DAUFA’s (NGR) in the 92kg finals by snagging a shot clock point and picking up a takedown late in the second period.

Martin ERASMUS (RSA) did something that not a lot of people expected. He defeated the man who had ownership over the 97kg weight class for the last several years, Soso TAMARAU (NGR). In winning his first African gold medal, Erasmus denied the reigning champion from winning his third African championship.